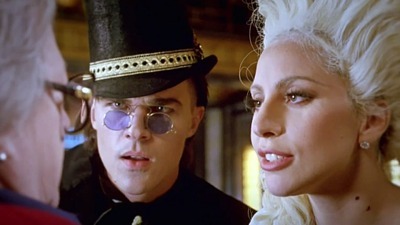 Our Thoughts: Tonight’s episode starts off with Alex dealing with a very sick child. After gorging on blood bags at the hospital, she decided to inject the kid with her own blood to turn him into a vampire and save him. She’s desperate to save the child, however she clearly hasn’t thought through any of her actions.

Donovan brings his mom to Ramona’s to begin hatching a plan to get back at the Countess. They figure that Iris is invisible enough to her that she will be a perfect inside person. Unfortunately, she’s not handling the vampirism well at all.

Turns out, Alex created a literal monster. Without guidance, new vampires have no self control at all. After killing his parents, he heads to school and begins spreading murder and mayhem. These kids make the ‘Children of the Corn’ look like Boy Scouts. This has got to be of of the bloodiest episodes of AHS yet.

John brings his crazy serial killer party story to the police and comes off looking crazy and gets himself fired. His life is in a downward spiral.

When Iris runs into the Countess, she acts extremely suspicious, but manages to get by without being suspected.

When an insufferable hipster couple checks in, Iris and Liz Taylor have their fun giving them cat food. We finally get Liz’s back story, and it gives further positive exposure to transgendered individuals. Her story is inspiring, even in the context of a horror TV show. So much so, that it inspires Iris to finally live for herself.

John wakes up next to Sally, who says he dragged her up there. He drank too much again and claims he can’t remember what happened when he clearly can.

Alex accepts the job as caretaker of the children, and takes her place at her son’s side in his coffin.  A sweet ending to an incredibly violent episode. Aside from last week’s serial killer party for devil’s night, this is my favorite episode thus far. See you next week!