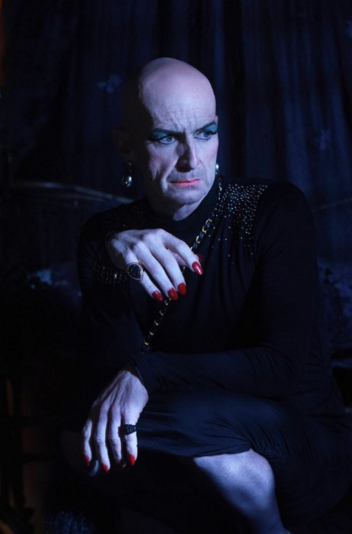 Synopsis: Ramona and Donovan enact their plan for revenge. Liz Taylor finds true love. The resident of Room 33 is revealed.

Our Thoughts: Tonight, we are taken back to Los, Angeles 1926, when the Countess went to see Charles Mongomery at season one’s Murder House. She sought an abortion, however the baby was delivered alive after attacking his nurse.

John discovers Alex in the coffin with Holden. Meanwhile, Tristan hooks up with Liz Taylor. There is more than sex between them. They have fallen in love and are hiding it from the Countess.

Alex convinces John he had been seeing things. I’m starting to feel bad for John. Everyone is playing him and telling him he’s seeing things.

As it turns out, the Countess kept the baby, named Bartholomew, which she birthed in 1926. The baby, who is still an infant, is occupant of Room 33.

Donovan and Ramona go back to the hotel while the Countess is away, planning to kill the vampire children. He chickens out, but his mother doesn’t. Iris goes after the kids, while Ramona heads to Bartholomew ‘s room. The infant escapes while she is trying to kill it.

The two foreign girls who died in the first episode are now stuck in the hotel and searching for their purpose, which Alex uses to her advantage. She has turned out to be an incredibly selfish person and cares nothing about her daughter or her soon-to-be ex-husband.

Another gruesome Ten Commandments murder happens. John shows up on the scene, claiming he had a police scanner in his room. The cops tell him they have someone in custody and send him away. The girls help John along on the road to madness, when Jame March appears in his room to congratulate  him on finally truly checking in.

John flees the hotel and goes back to his home, but Bartholomew followed him. He shoots at the child, scaring his daughter. Alex later finds him and takes him home to the Countess. We finally get a glimpse of the child-monster at the very end of the episode.

Liz and Tristan’s love takes a tragic turn when Liz believes that she will have a heart and give up her toy. I felt so bad for Liz. Why help her so much then destroy her happiness? The Countess seems almost feral in a way, with no real regard for anyone but herself and possibly her children. Just when you think she might have a heart, she shows that she doesn’t.

I am enjoying this season, but I feel we have not seen enough of the James March character. Fortunately, it looks like he will have a bigger part in the next episode. I am still not sure how I feel about Lady Gaga on the show, but her Countess character is getting more and more interesting with each episode, as do most characters on AHS. I’m interested to see if Iris has killed all the vampire children or not, and who is behind the Ten Commandments murders. Will John regain his sanity and figure out what is really going on?   See you next week!