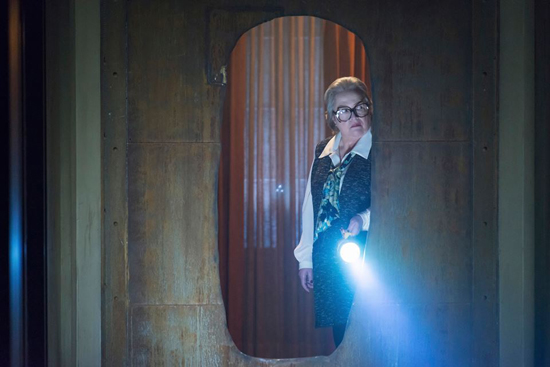 Synopsis: Will Drake’s renovations uncover one of the Hotel’s greatest secrets. John undergoes psychiatric evaluation. The Countess learns the fate of her first love.

Our Thoughts: Tonight’s episode begins with workers opening up a wall in The Hotel Cortez during renovations, only to find starving vampires who attack and kill them.

John admits himself into a mental hospital getting a psych evaluation. After getting into an altercation with the one co-worker trying to help him he decides he needs professional help.

Later, The Countess investigates the massacre, and is frightened by what she sees, telling Iris that it was someone that was starving. The next thing we know, those starving creatures attack a new guest at the hotel.

The Countess flash backs to 1925 when she was still human, and an actress. During that time she met the spitting image of Tristan, a man named Valentino, who was also an actor of the time. This was the first time we see a vulnerable Countess. She falls in love with him. In a full circle turn, she is attending the opening of the Hotel Cortez, which James March is hosting. When she hears that Valentino is dead, and is about throw herself out a window, March stops her. In her grief, she marries him. When she finds out he’s a serial killer, she isn’t scared and goes as far as to say next time she wants to watch.

As it turns out, Valentino meets the director of the silent vampire classic ‘Nosferatu,’ who turns him into a vampire. After which, he fakes his death and returns to town to offer The Countess the gift of immortal life as well.

It turns out that John checking himself into the hospital was all a ploy to gain access to the suspected serial killer they are holding. We should have known he wouldn’t give up his obsession so easily. What he finds is that they have a young vampire named Wren, who helped with the crimes. In 1986 her father left her in a hot car while he goes drinking at The Hotel Cortez and The Countess saves her. John pleads with her and she agrees to show him where the killer lives.

When it is revealed that Valentino and his wife were the starving ones awoken in the hotel, it becomes clear why they go so in depth with her back story. March had attempted to kill them back in the 1920s and walled them into the hotel to keep The Countess to himself. He finally tells her of it and she is furious. Meanwhile, the pair have regained their strength and head out on the town.

The night closes with Wren bringing John to the hotel, only to be hit by a car. There is a lot going on in this episode and it seems like an odd episode to constrain into the 60 minute time slot, while all of the other episodes have been extended. There are other loose ends from last week that have yet to be addressed. Unfortunately, we have to wait two weeks for the next episode. I have a guess as to who the seven commandments killer is. Will we find out before the last episode? Or is Ryan Murphy going to make us wait as long as possible? See you in two weeks to find out those questions and more!