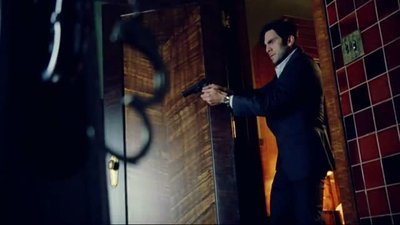 Our Thoughts: Tonight begins with the ghost of Richard Ramierz (aka The Night Stalker) checking into the hotel for devil’s night.

John realizes he has a lost child in common with Mrs. Evers. However, her child was killed by a serial killer. Meanwhile, she is getting ready for the Devil’s night party that March has every year.

Alex took Holden home after finding him at the hotel last episode, and discovered that his temperature was abnormal. Even worse, she finds him drinking the blood of the family dog and is asking for his other mother. She takes him back to the hotel and he promptly gets into his coffin. The Countess appears and tells her how she came to have her son and offers her the chance to be like her.

John gets an invitation to attend March’s devil’s night party. AHS alum Lily Rabe returns for the party as serial killer Aileen Wuornos. Several other serial killers show up for the party, including Gacy, Dahmer, and Zodiac. In an epic AHS twist, each of them had stayed at the hotel at some point and were trained by March before they became killers. The whole party ended up quite hilarious to watch and was the highlight of the episode for me.

For some reason March thinks that John is one of them. Is there more to John than what we have seen? Is there something we don’t know about him?

The group uses Sally to bring in new victims for their after dinner sacrifice. As they are enjoying the kill, John wakes to Sally saying he’d been drinking absinthe and convinced him that he had hallucinated the whole party.

Alex chooses to become a vampire so she can be with her son. In exchange she has to work for her and be a loyal servant.

This was probably my favorite episode by far and it was really cool to see all the serial killers interacting with each other. I love how history is often woven into the AHS seasons. See you next week for “Room Service”!