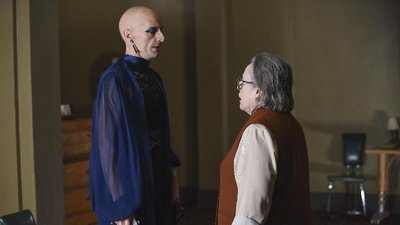 Synopsis: Ramona draws vitality from an unlikely source. Sally uses her past to negotiate her future. Scarlett learns the truth of her family’s affliction.

Our Thoughts: This week we begin with the epic plot Liz and Iris are in the midst of executing. Unfortunately, most of the bullets hit Donovan.

Sally comes to the aid of the Countess. She makes her promise to never leave her and talks about her past issues with abandonment. With yet another gratuitous sex scene, she tells the story of when she accidentally killed two of her then-band members back in the 90’s, when she tried to sew them both to her after doing drugs.

John tries to act like everything will be perfect again with their family. Scarlett isn’t stupid and knows that her mother and brother have to drink blood to live. John says he will take care of everything and starts bringing them bodies.

Iris and Liz find Ramona and try to team up with her to finish off the Countess. But first they need to bring her a victim. Just when Queenie (from Coven) shows up and wants a room at the hotel.  Hilariously, Ramona attempts to fight her, not knowing she is a human voodoo doll. She can’t kill her, but apparently ghosts can. March takes her down and Ramona drinks witches blood, making her exceptionally strong.

Ramona goes after the Countess only to be seduced by her. The end of the episode surprised me. John completes the ten commandments murders and the Countess is finally killed and stuck in the hotel. March still doesn’t allow Sally to kill John, saying he has big plans for him. March seemingly gets everything he wants.

Next week is the finale, and from the premiere, it appears the ghosts have a free-for-all killing guests. I can’t wait to see how this ends! Until next week, AHS fans!