Chip Zdarsky is a name synonymous with super heroes and science fiction, but horror?

Fans of Zdarsky will be pleases to hear that his signature humor and wit is just as sharp in the horror genre as it is in his work on titles as such as Howard the Duck, Spider-Man, and Daredevil, but in a completely different setting.  Zdarsky’s new digital series for comiXology Afterlift is evidence of this fact.  Learn more about Afterlift in Zdarsky’s exclusive interview with HNN below.

Horror News Network: What was the genesis of Afterlift?

Chip Zdarsky: It started with thoughts on Charon and the River Styx, the idea of a journey to the afterlife and paying the literal toll. I wondered what the modern version of that would look like. At one point Charon’s boat and the coins he was paid were “modern,” so why not look at the 2019 version of the hired ride, which would be ride shares via an app!

I reached out to Jason Loo, an amazing comic writer and artist, known for his book The Pitiful Lizard. I knew a project like this would really rely on inventiveness and excellent human reactions, which he excels at, so I was thrilled that he had the gap in his schedule to do this. He’s also the greatest guy I know. His editor on Human Lizard, Allison O’Toole, joined us as our editor and project manager, and she’s been amazing at keeping everything going smoothly.

HNN: Janice is in many cases, a classic “taxi driver” when it comes to her attitude and resourcefulness.  Why does this character type (and profession) lend itself to a story like Afterlift?

Zdarsky: Taxi drivers, especially the good ones, know things. They know the city, they know its hidden corners, and they’re listeners. They collect stories. Which makes them ideal candidates to navigate lands made from stories.

There’s another thing with drivers, is that it always feels like they have secrets, things in their life which have them driving through the night. Janice is definitely one of those drivers.

HNN: What was it like working with Jason Loo and how does his style help convey your story/script?

Zdarsky: Jason is amazing. He’s up for any challenge, so I never had to worry about putting things into the script that he couldn’t draw, because he would just tackle those parts with everything he’s got. When we started the project he warned me he wasn’t comfortable drawing cars, and within a week of practicing his vehicles got so good it’s like he’d always known how to draw them.

We brought in Paris Alleyne on colours, and he just made everything pop. The car chase and action scenes got 100% more exciting, the environments got wilder. He’s a huge part of the look. As is Aditya Bidikar, our letterer, who is really adept at figuring out the look of a story. 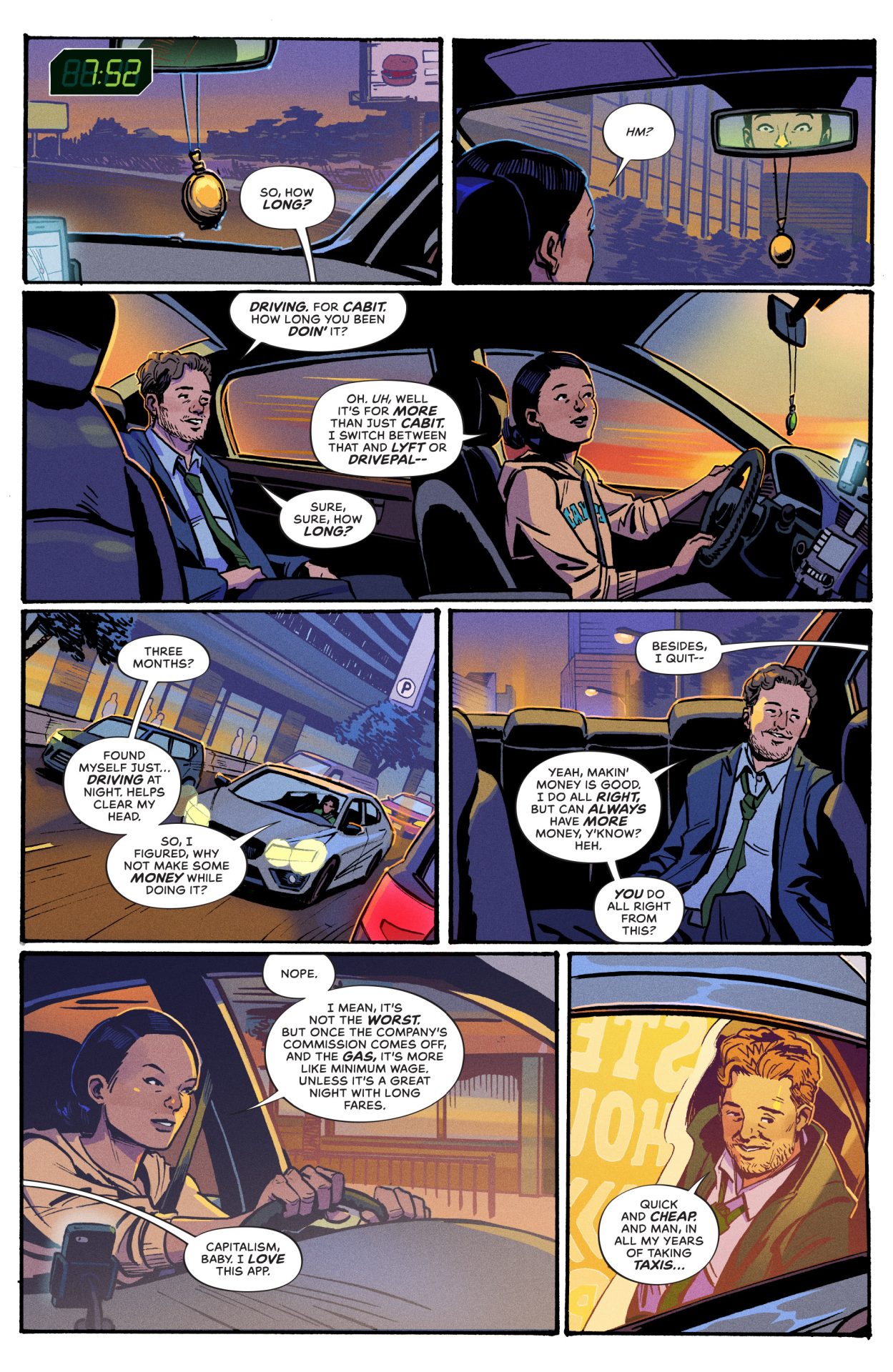 HNN: Do you approach a web comic differently than a traditional print edition in terms of storytelling?

Kind of, yeah. I no longer have to worry about “page turns” since every page is seen individually, not as spreads. Also, I can more freely add extra pages of text since we’re not limited by the printing. Jason has the bigger challenge as comiXology has “guided view,” which zooms in on each panel. So, he needs to try to not have unusual panel shapes that would restrict that view.

HNN: You have an incredibly diverse catalog of stories, but readers haven’t seen a lot in the horror genre from you.  What is it like crafting a horror comic as opposed to a sci-fi or super hero story?

Zdarsky: Well, there are horror elements for sure, but a lot of Afterlift is about guilt and responsibility and letting go. No matter the genre you need to figure out the human heart of the story and this project is no exception. The horror in this project is less about the demons and more about knowing what you’ve done and being unable to undo it.

HNN: What can readers look forward to seeing in Afterlift?

We’re really happy with the book and how it’s turned out. I’ve done a lot of books for Marvel where you’re, essentially, always in a second act because of the nature of that ongoing continuity. So it was really satisfying getting to do a story with a firm beginning, middle and end.

Oh! Well, for Marvel I’m still going strong on Daredevil, and they just announced a four-issue mini called X-Men + Fantastic Four which is going to be pretty wild. There are a couple more projects I’m doing with them that should be announced before the end of the year, I think?

And we’re back on Sex Criminals, the book that I illustrate and Matt Fraction writes for Image! It’s our final arc and it’s incredibly nerve-wracking. Issue #26 drops in January.

Afterlift #1 is currently available on comiXology and on Amazon.