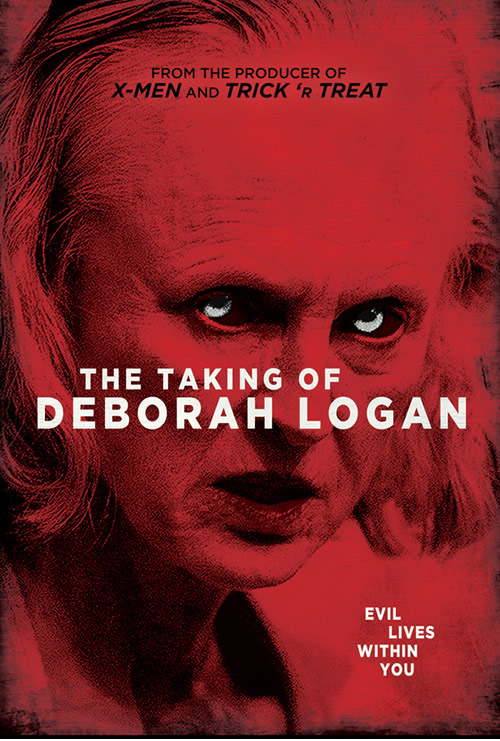 If you haven’t seen “The Taking of Deborah Logan” yet, stop reading this and go stream it on Netflix now! After you’ve had your mind blown, come on back and check out Stephanie Shamblin Gray’s interview with director/co-writer Adam Robitel.

Stephanie Shamblin Gray: First off, Congratulations! “The Taking of Deborah Logan” has been making so many “Best of 2014” horror movie lists. It even got a great review from our notoriously anti-found-footage movie reviewer, Larry Dwyer. How are you feeling about all this?

Adam Robitel: It’s incredibly rewarding. Our film didn’t have any marketing resources behind it, so the initial push and streaming on NETFLIX  was a pretty effective way to build awareness. The people that are responding to it, really respond in a visceral and personal way and then share it with their friends. That was frankly our only hope of breaking out– that it would become viral among fans. We are very grateful. I think every filmmaker goes through the gamut of emotions when they let go of a project — sort of the Kubler-Ross stages of grief. There were times when I felt like I had utterly failed. There were times when I felt like I’d made GONE WITH THE WIND… now it all seems right-sized in my mind, I see its flaws but also what our team was able to accomplish in light of the odds against us.I’m just grateful we got it done and people are discovering it–  and yes, there is serious found-footage fatigue out there and people are really sick of crappy shaky camera movies with no story. The bar seems to be that much higher in this space, so it’s really tough to do something that earns the audience back. My co-writer Gavin Heffernan and I just really believe in our guts, that this film is frightening because of that extra level of the suspension of disbelief — what if Deborah was real? We wanted to ground the film in that way, so it just made logistical, story and financial sense to make it found footage.

Stephanie Shamblin Gray: For anyone who hasn’t seen it yet, can you tell us a little about the film?

Adam Robitel: The Taking of Deborah Logan starts as a relatively grounded medical documentary about an elderly woman living with Alzheimer’s and her daughter struggling as her caregiver. As the crew starts to document strange happenings in / around Deborah, a mystery reveals itself and a horrific secret is unearthed. Ultimately it’s a grounded medical documentary turned possession and ultimately a monster movie. We always wanted to slowly take the screws off the ride and turn it into a roller coaster.

Stephanie Shamblin Gray: Using a subject that is already a quiet fear of many people, Alzheimer’s Disease, is a genius move. What was the inspiration there?

Adam Robitel: I’d always been terrified of Alzheimers. I remember an uncle who used to be found wandering people’s yards at night, completely disoriented. The idea that someone could lose their mind and be literally trapped inside their own bodies has always intrigued and horrified me. As I started to do research, I realized that the story is never about one person – often it’s the caretaker that suffers the most. Alzheimer’s is a pretty organic metaphor for possession and I think the best horror films take the horrors of real life and then turn them on their head. I also knew, at the end of the day, while it starts grounded I really wanted the film to slowly become “unhinged” and move into the fantastic. At the end of the day, the disease is really an allegory for what happens to Deborah and patients, they literally get “swallowed” whole. It took two years to develop the script and it was only when my cowriter Gavin Heffernan and I worked through many iterations that we were able to come up with the right alchemy of set up and scares. It was a really tricky balance.

Stephanie Shamblin Gray: The whole cast is great, but Jill Larson (as Deborah Logan) is an absolute gem! Tell us what is was like working with her.

Adam Robitel: Jill is an absolute doll and was always my first and only choice for Deborah. She is absolutely fearless. She has the ability to be both grandmotherly and terrifying in one fell-swoop. Believe it or not, this was her first horror film! Well, that’s not entirely correct, she played the iconic “Manacled Hag” in Scorsese’s SHUTTER ISLAND (remember the creepy old woman bringing her finger to her lips, shhhhhhusshing us in the trailer)? So I knew she had this iconic and very cinematic look to her face. Her deterioration in the film is profound. You have ninety minutes to show this tremendously painful and hard to watch deterioration. The physical givens of dementia are also tricky– We didn’t want to play anything on the nose or do the obvious. I showed her a lot of reference clips and I know she was daunted initially on really getting the stages of the disease right, the physicality and the behavior. She is a very cerebral actress and we worked on really letting go of her attachments to things that made absolute sense, particularly in the latter half of the movie when things go bananas / full bore possession. Jill is so incredibly talented and I believe she could have a huge career being doused in Caro-syrup, doing horror films, should she choose to do so.

Stephanie Shamblin Gray: Something crazy will always happen on a set. Can you tell us a funny or interesting story that happened while filming?

Adam Robitel: Well, the biggest thing that comes to mind– remember the scene where Deb gets up from the table and then off camera, she vomits earthworms? Well initially, we had a big “trailer moment” shot, where that was going to actually happen on camera– She’s being interviewed by Mia and her crew, starts to become possessed by Desjardins… we had a blood squib in her crotch area…which was supposed to bloom (bleeding flowers) and then she was supposed to projectile vomit earthworms all over the place! Well, as is often the case on small movies, we didn’t get a practice run and waited till the end of the day for the effects shot… The practical effects guy was used to filling up the pneumatic pump / sprayer with lighter material called Fuller’s earth… they didn’t test it with the muddy soil that we were going to use. So, when it came to fire, they over cranked the PSI to get the more viscous material to fire and it EXPLODED like a cannon, all over the ceiling, the walls and our actors, Jill, Michelle and Anne… there are pictures on our Facebook fanpage of this moment. When all was said and done, it is probably more effective not to see this effect, no matter how convincing, as the imagination is always more powerful than what we actually see.

Stephanie Shamblin Gray: What’s next for you? Any other horror projects in the near future?

Adam Robitel: I’ve got a few really exciting projects cooking. Gavin Heffernan and I were just brought on for some production rewrites for a Paramount Horror film, which was a really fun challenge. I can’t say much about that at this time. I’m also developing a pitch on a really exciting book that I just love. I’m also hoping to direct a script I wrote, called THE BLOODY BENDERS, based on the true story.

Stephanie Shamblin Gray: Sounds great! Thank you for talking to us, Adam!

Adam Robitel: My absolute pleasure, thanks for helping us get the word out about our film.