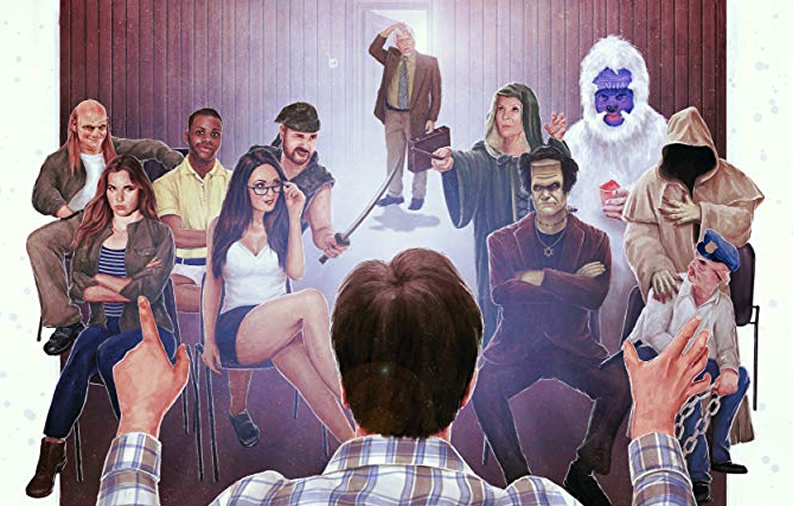 Nearly a year ago at HorrorHound Weekend in Cincinnati, attending both the convention and their film festival, I found some surprising gems. This is a large reason why I love heading to this convention. There have been many instances of this over the last five years for me and I cherish each one. Even some of these films surprise and impress me enough to be part of my end of the year ‘Film Festival Features’ list. Sitting back after a late screening, I was enchanted by such a feature produced by a pair of passionate brothers that were based not too far from my home in New Jersey. Named ‘Fuzz on the Lens Productions,’ their film is called Abnormal Attraction.

A genre hybrid of comedy, fantasy, and horror, the feature found its way on to my favorites list at number 34 in 2018. Screening on a makeshift theater setup, Abnormal Attraction left an impression on me that many genre hybrids usually do not. It made me laugh, it made me think, but most of all, it stuck with me. Nowadays, that is easier said than done. In this modern era, many filmmakers just want to put their vision and art out into the world because they have the technology or the ability to do so. Whether there is a message, addresses issues/themes or has any substance at all is lost in a variety of indie filmmaking. 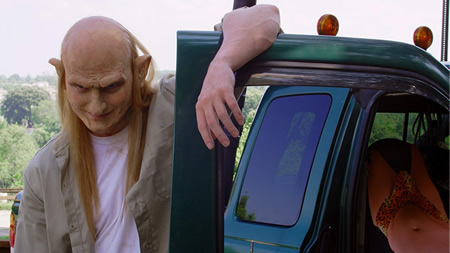 Abnormal Attraction tells the tale of the human world and the world of fantasy creatures and monsters living under one sky. Just like our reality and history, there is prejudice, fear, and hate towards each other as they try to co-exist. Telling the story on more of a micro level, we get hints of the larger world around us as we watch. Abnormal Attraction tells the story that ties relationships, choices, and mistakes made by both humans and monsters. Opening with lead character Nick (Nathan Reid) getting his colleague Dr. Cole (Davidson) to watch over her therapy group at the last minute for night, Dr. Cole thinks he is helping out. Thinking it is an AA style group, Dr. Cole is introduced to a world that catches him off guard. As he Dr. Cole, Nick, and Nick’s girlfriend Alyssa (Nicole Balsam), story arcs start to twist together in this world of humans and creatures, the craziness begins for man and monster alike.

Not exactly an original concept of man meets monster, The Leavy Brothers, a talented crew, and a sensational cast take this story arc and bring an intelligence, humor, and heart to what could have been a disaster of epic indie portions if they had followed the same genre blend formula. The second feature from the Staten Island based Fuzz on the Lens Production Company, you can’t help but cheer for the east coast collective creating a project like this. This project is indie at the heart of it and no doubt a journey. The film is directed by Michael Leavy who also produced, acted, co-wrote this film with his brother Jason Leavy who produced and played the crude, but exceptionally funny, character ‘Finbar’ in the story. They are joined on the project by co-founder of Fuzz on the Lens as well as DP and actor Steve Della Salla. Since 2012, Michael has written most of his film work bring his signature to of television, short form films, and documentary projects. With somewhere around a five-year window since his debut feature entitled Catch of the Day, Leavy and his brother Jason took a huge step forward with this film on a variety of levels.

Featuring a cast of genre names like Malcolm McDowell who plays The Boogeyman, Leslie Easterbrook who plays The Witch, Tyler Mane as the Cyclops, and Gilbert Gottfried as “Pig Man,” Bruce Davidson as Dr. Stanley Cole along with names like Renee Geerlings, Eileen Dietz, Michael Buscemi, Abnormal Attraction gives meaty roles for both voice and visual performance.  Abnormal Attraction has a dynamic that we have not really seen with many of the modern “horror all-star collection” type of films before. With some of the more recent genre films where the collection of horror icons is the top selling point but play nothing more than one-dimensional characters, execute the same old troupes, and the typical storytelling, Abnormal Attraction allows the experienced talent to have fun, be creative, and breath within their characters. This performance freedom and what feels like improv gives the viewer not only what they have come to expect with human and creatures dynamic but also bring something off the page through performance and writing that is unexpected at times as well as enjoyably throughout. Not wanting to get to specific on magic of this freedom, you will have to experience for yourself. 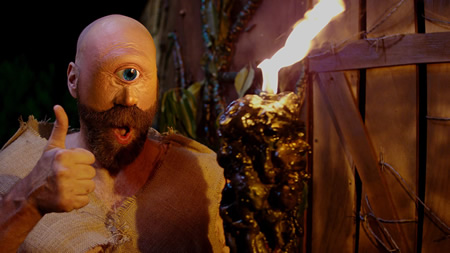 Abnormal Attraction includes every single fairy tale creature, monster, and beast you can think of as part of the cast of characters. From witches to werewolves to tooth fairies to mermaids and more. Another thing I loved about the writing is that all these creatures have a place in the narrative no matter the amount of screen time or the role. Each characters no matter human or not, feel like they have their own personality, some depth, and a place no matter how much they fit in or don’t. This goes to a focused and executed screenplay by the Leavy’s and Steven Della Salla. The cinematography overall works but does necessarily stand out in this film. I may be wrong, but it feels like it captures the moments to satisfy but does not take many risks which no doubt you can connect to the indie filmmaking restrictions. A usual causality of the indie filmmaking game, the lighting design and execution succeeds overall in the film. Abnormal Attraction features several night sequences which in lesser experienced hands would turn out to dark or would not be able to find the detail in the FX makeup, thankfully this film finds success more than failure. Especially the outdoor scenes to me look crisp and full of life with sharp color correction and camera placement.

In the world of indie filmmaking, it is not always the best of idea for anyone in a creative position to edit their own project. An unfortunate necessity of a limited budget, resources, and time, the Leavy brothers oversaw post production on this film. It can be a conflict of wanting to keep too much in and not make cuts that are needed. Overall, Abnormal Attraction’s story does not seem to fall off. While certain scenes like the therapy session and visit to Jamie’s mother house seem to run a bit long and could be trimmed.

This does not take away though from the enjoyment of the overall product though. Each time I sit down to watch it, the story flows for the most part. Abnormal Attraction has a dysfunctional magic about it. That not only comes from so many different points, but also from the risks and success of the types of comedy. Whether improv, gross out, awkward moments, or straight jokes, the minds behind Fuzz on the Lens Productions are just everyday guys making quality and fun genre cinema that people can get behind. No doubt, there is a pressure on those involved in the film to find that audience and success with the film, it is a business after all. It is no doubt more than a paycheck with names like Davidson, McDowell, Easterbrook, Mane, and more join in. Each character’s performance brings something different to the film and whether it the material, crew, and/or the talents of the cast, it all works warts and all. 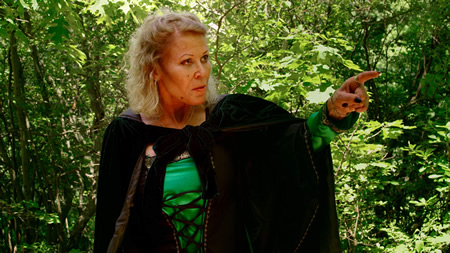 Speaking warts, I wanted to give a shout out in this review to the makeup FX team from Abnormal Attraction. Headed by the talented Briana Calcagno, her department for an indie production are resourceful, effective, and visually smart about the use of FX throughout. Feeling like it is coming off the pages of a fairy tale book, the practical FX makeup fits unlike some of the CGI we see throughout. The FX overall again tie into how you see the color and the work to make sure it looks real and not part of some sort of punchline. The score also matches that fairy tale feeling you expect once the film fully unfolds. It is corky and fitting to the characters that belong in this universe. Composed by Gene Micofsky, this seems to be his first collaboration with Fuzz on the Lens Production unlike Calcagno who has worked on a variety of projects with the group before. This no doubt benefited the production on a variety of fronts.

Overall, Abnormal Attraction is one of the gems from 2018. It offers everything a genre fan could want including mature humor, fantasy, hints of horror, a stellar cast, twists, interesting characters, and a quality production. While I am not a fan of the “fairy tale” ending, the pieces fit well together overall. Blending relevant issues, intelligence, and self-reflective storytelling, I am very happy to see the film find a home with Uncork’d Entertainment in the next stage. It fits based on previous experience and the catalog I have seen. No matter what, this is a good bridge film for fans to get an overall intro into the elements of the genre. Why it is a mature entry? Simply, it hits all the right buttons. I look forward to seeing what is next for these Staten Island madmen.