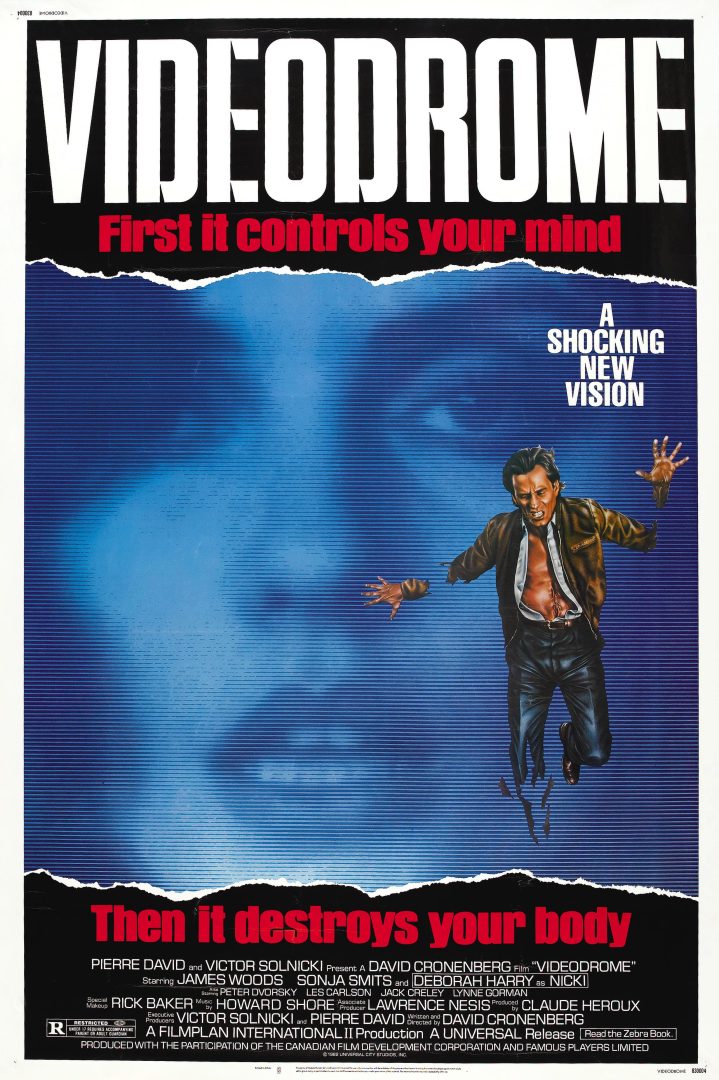 When I was a kid, my parents and I would hit the local video store every Friday after my dad got out of work and we would rent enough movies to last us through the weekend; about 95% of those movies would be of the horror variety. I vividly remember my mom taking the VHS cover of David Cronenberg’s Videodrome off of the shelf, with its odd picture of James Woods hovering in front of a blue TV screen with a girl’s face in it, and saying that we should rent it because the singer from Blondie was in it.

My dad and I agreed to add it to the pile and we headed home with the free box of popcorn the store handed out with five or more video rentals (bless the 80’s).

James Woods plays Max Renn, the head of a sleazy Canadian cable TV network who is looking for some new and edgier programming to grab new viewers. His technician Harlan stumbles across a signal from a Malaysian television feed that shows what appear to be snuff films; this show is called Videodrome and Max Renn wants it on his network (not thinking that it’s real, of course). Debbie Harry (from Blondie) plays radio psychiatrist Nicki Brand who finds out about Videodrome from Max and is more intrigued by it than he thought she would be; even wanting to be on the show herself.

Once Max finds out from Harlan that the show is actually broadcast in Pittsburgh and not Malaysia, it is, as they say, on like Donkey Kong. Shit hits the fan in quite a lot of disturbing ways that I’ll let you find out for yourself for those of you who have never witnessed it.

My first memories of Videodrome are ones of mass confusion. I might have been about thirteen the first time I saw it so I definitely didn’t get what was going on other than the fact that it was pretty disturbing to watch James Woods stick a Beta tape into a gaping hole in his stomach. It wasn’t until viewing later on that I truly realized the genius that is David Cronenberg. This movie is such a sick and twisted mess that I almost feel bad recommending it to people who have never seen it but if I listened to my conscious, I would be doing them a disservice. “Long live the new flesh”.