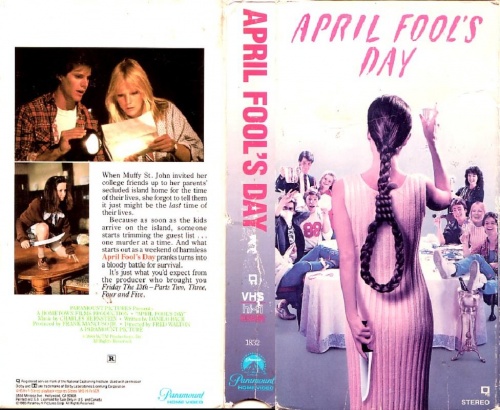 A Look Back at…April Fool’s Day!

Hello fiends! Join me on a ride back into the glory days of the teen slasher movie and let’s take a look at one of my all-time favorites: 1986’s April Fool’s Day. This one came from another trip with my mom and dad to our local video store; these were the days just before evil Blockbuster helped to shut down all of the “mom and pop” video stores that had all of the good horror flicks.

While our last “look back” was at Videodrome which was a pick by my mom, April Fool’s Day was all me. I was immediately drawn to the VHS cover with the girl with the noose for hair and the knife behind her back but then when I turned it over and saw that Ginny from Friday the 13th Part 2 was in it?? Score!

It wasn’t until we popped the movie in and started to watch it that we realized that this was basically an all-star cast, as far as horror movies go anyway. Besides Amy Steel (Ginny from F13Part2) you had Deborah Foreman from Valley Girl and Real Genius (Julie Richman and Susan Decker respectively), Deborah Goodrich from Just One of the Guys (Deborah), Ken Olandt from Summer School (Larry), Griffin O’Neal from The Wraith (Oggie), Clayton Rohner from Just One of the Guys (Rick Morehouse) and Tom Wilson from Back to the Future (Fucking Biff Tannen!) – How’s that for an all-80’s all-star cast?!

The movie starts off innocently enough as a group of college kids arrive at a ferry that they’re all to take to a private island to spend a weekend with their rich friend Muffy St. John (Deborah Foreman). A few of the kids know each other already and the others do their best to get acquainted as the ferry begins its journey to the St. John estate. Since they’re college kids, and it’s April Fool’s Day, the practical jokes begin pretty quickly but like they say, it’s all fun and games until an innocent deckhand named Buck gets crushed in between the boat and a pier due to one of their jokes.

Buck is rushed off to the hospital by boat and the gang is told to stay put on the island for later questioning. The fun-loving friends put the nasty scene behind them as Muffy leads them into the mansion where they’re to spend the weekend. The jokes continue with whoopee cushions and other assorted light-hearted pranks but soon the jokes start to get a bit nastier…and people start disappearing.

Part of the greatness of April Fool’s Day is that it embraces something that has become somewhat of a lost art in today’s films: the ability to use suspense and tension instead of jump-scares and overdone gore. Not to mention that it has a heck of a twist ending.

If you’ve never seen it, give it a whirl. I don’t think you’ll be disappointed.