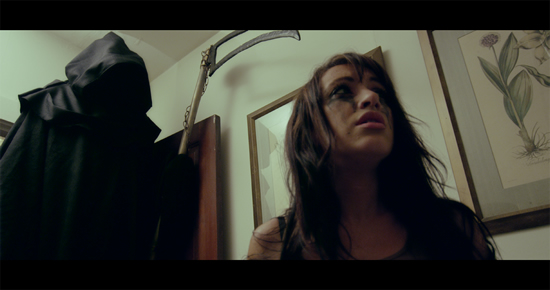 Synopsis: Raphael, a young executive who is on the verge of losing a multimillion dollar architectural deal with a large distribution company lead by the awkward Stanfords. Raphael suffers a sudden death in his family and has to immediately leave to go to the funeral in his home town of Metzburgh. Seeing this as his big chance to get ahead is Wayne, a jealous co-worker who is in competition with Raphael. As Raphael returns to Metzburgh, he experiences a life changing event: witnessing a Grim Reaper taking a soul. This sighting results in Raphael becoming a Reaper and having to explore his own conscience and the lengths he will go to get his own life back. But Death, has other plans for the naive young executive.

Our Thoughts: A Grim Becoming is an original new horror comedy from director Adam R. Steigert. When given the job of reaping souls, executive Rapheal fights tooth and nail to remain human. Death is a powerful boss and not someone you can say no to, but Raphael does his damnedest to do it.

When it is time to take a soul, Raphael transforms into the classic Grim Reaper, skeleton and all.  This makes for a very humorous portrayal of grim reapers in A Grim Becoming. From Reaper fights to a little girl accidentally being killed by death and turning to a zombie, the film brings a lot of laughs to a very dark topic. Even funnier, every time Raphael changes back into his human form, he shows up naked where ever he was previously.

Death is personified in A Grim Becoming, an idea I have always been fascinated with. In a unique twist, we also meet Life, who is portrayed as a young blond woman. Other classic images appear as well, with Archangel Michael portrayed as a stoner hanging out with a grim reaper. The rules of death and taking lives are uniquely written, with Death employing many grim reapers to help him take his souls. If a reaper doesn’t take a soul quick enough, another can show up to do it and the two must battle to the death.  This is among other life taking rules they must follow.

The film does a decent job with special effects, especially for being an independent film. I particularly loved the makeup job on Death. The acting was excellent. Michael Sciabarrasi was hilarious as Death, as was Brandyn T. Williams, who played Raphael. This is the most original horror comedy and portrayal of death I have seen in quite a long time. A Grim Becoming does not disappoint and a must watch for horror comedy fans!