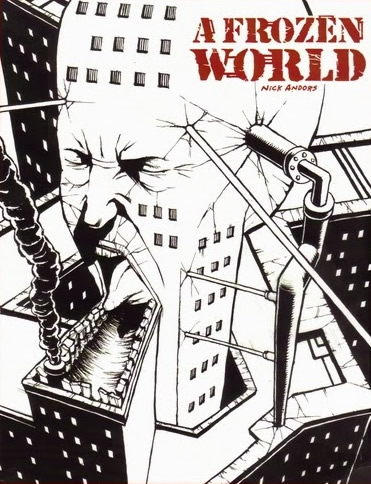 Written and Illustrated by: Nick Andors

Synopsis:  More than just a psychological thriller, A Frozen World is a character portrait of an urban landscape known as “Irongates,” lost in time somewhere in the distant future.  Irongates is not a city, it’s a world within a world, an endless maze of buildings that stretches thousands of miles and holds an infinite number of stories.

Each of the four stories that comprise this book plays a critical role in capturing the likeness of this world.  They guide the reader from the gritty underworld across the weathered concrete skin of the streets where nobody is safe.

Our Thoughts: A Frozen World is a twisted Twilight Zone-esque graphic novel which is presented in beautiful black and white. Creator, Nick Andors creates a seedy world where dangers lurk around every corner. Pray that you never find yourself in Irongates, as it is not for the faint of heart.

There are four semi-connected stories that take place in a Frozen World. Each story contains its own type of hope and terror within.  From a man who scavenges the streets, to a serial killer this collection of stories highlights Nick Anders diverse writing style.   Horror  fans will not be disappointed with the suspense and thriller aspect of the plotlines.

Andors’ art style really complements this unique, indie horror comic.  At the end of the graphic novel you will be left wanting more.  A Frozen World is definitely worth any horror r comic fans time. Here’s hoping Andors’ delivers a follow up to this book.