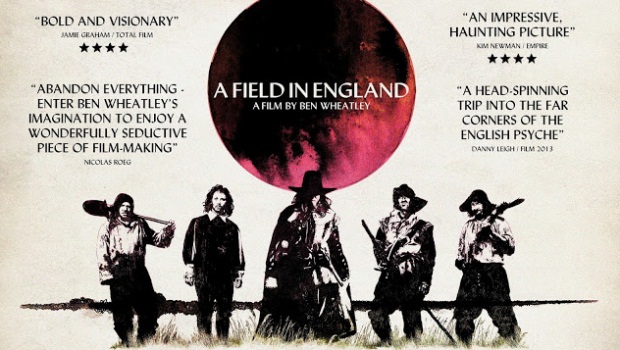 A Field in England Review

Synopsis: During the English Civil War, a sorcerer’s apprentice and two deserters encounter a mysterious man that is convinced there is a treasure to be unearthed in a field. Their quest is influenced by hallucinogenics, alchemy, savagery and the hint that maybe the treasure is not material wealth but spiritual knowledge.

The tradition of British “rural horror,” films that focus on folklore, witchcraft, and paganism playing out in the deceptively quaint English countryside, has produced several masterpieces: Witchfinder General, Blood on Satan’s Claw, The Wicker Man, and The Witches.  The UK has a deep history of the occult and a belief that magic can play a part in the everyday lives of its citizens.  The English Civil War created great instability in the country during the mid-1600’s, which coincided with a steep increase in supernatural panics and witchcraft trials, as witchfinders like Matthew Hopkins used the social and political turmoil of the era to exploit  both the ignorant and the powerful alike.  Ben Wheatley’s A Field in England uses this setting but crafts an entirely different kind of weird film, a movie that oscillates between scatological realism and surreal transcendence in order to push through the base materialism of existence to find a higher form of understanding, just as England itself was evolving towards democratic and individualized ideas of freedom.  Coming across like Waiting for Godot staged by William Shakespeare and Michael Reeves, cinematographer  Laurie Rose’s black and white visuals run the gamut from starkly beautiful to stunningly grotesque: wide panoramic skies, shimmering fields (recalling Terrence Malick’s Days of Heaven), vicious wounds, and a blown off face.  The performances are uniformly excellent as the four actors play off each other well; the characters embodying multiple levels of social class, belief systems, and life philosophies.  Jim Williams’s score is a brilliant electro-acoustic reverie combining folk songs, martial rhythms, and ambient sounds. So with all these amazing parts why is A Field in England such a disappointment? Wheatley’s film is willfully enigmatic but only goes half way: the script can’t seem to make up its mind whether it’s going to be a total mindblower or an absurdly comedic ensemble piece.  The scenes in which the point of view switches to a hallucinating, magic mushroom initiated perspective is neat but can’t touch the mad genius of Jodorowsky, Lynch, or Russell.  The theme of alchemy could have made a stronger statement about human beings’ inability to go beyond greed, selfishness, anger, and cruelty to discover true freedom and equality for all, the transmutation of leaden ego to gold selflessness. This notion is hinted at by the image of recurrence at the end of the film but seems swallowed by its need to be as obtuse as possible. Shame though, because A Field in England should have been the next British rural horror classic.