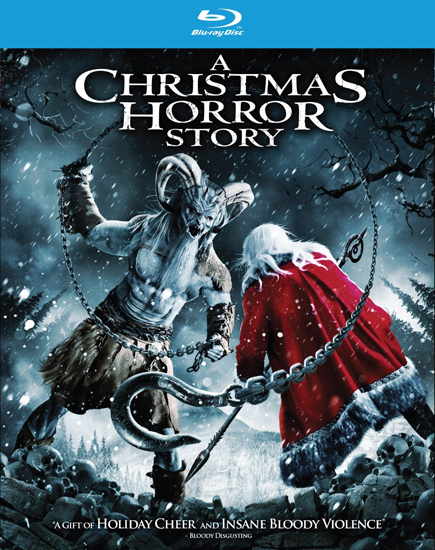 Our Thoughts: ‘A Christmas Horror Story’ is an anthology style horror film in which a radio host tells four tales of terror with holiday themes. From terrifyingly disturbing, and campy filled fun, it’s a film with a lot to offer.

The first story is about teenagers decide to go to the location of a mysterious murder for a school project. The group are recording their experience in a news report format, when they get trapped in the building and creepy things start happening. This was the most screwed up tale of the bunch, with a disturbing, twisted ending.

The second story is about a family of greedy people who go to their rich relative’s home to try to get on her good side. They are asked to leave the house when the family’s son mocks the existence of Krampus. Little do they know what they have unleashed. This is one of a handful of Krampus themed horror films to come out this year. It’s a fun portrayal of a modern day Krampus attack, with more to it than meets the eye.

In the third, a family goes to pick up a Christmas tree and nearly loses their son in the woods. When the family arrives home, the son begins acting rather strangely and suddenly becomes violent. The topic of this story is largely unexplored in horror and was portrayed in an extremely terrifying manner.  It was also was my favorite in the collection of stories.

The final story centers around Santa getting ready to make his yearly run, when his elves become infected with something and turn into zombies. This story is the most campy of the bunch, and also the goriest and most amusing. It was another tale with much more to it than expected, and my other favorite.

The execution isn’t quite as slick as something like ‘Trick ‘r Treat’, however ‘A Christmas Horror Story’ does deliver four excellent stories with a good number of scares and a handful of laughs. The acting is decent, with the best performances coming from Oluniké Adeliyi, who plays confused mother Kim and Amy Forsyth, who plays good daughter Caprice Bauer. William Shatner is also quite enjoyable to watch as radio host Dangerous Dan. ‘A Christmas Horror Story’ is a film that every holiday horror fan will want in their collection!