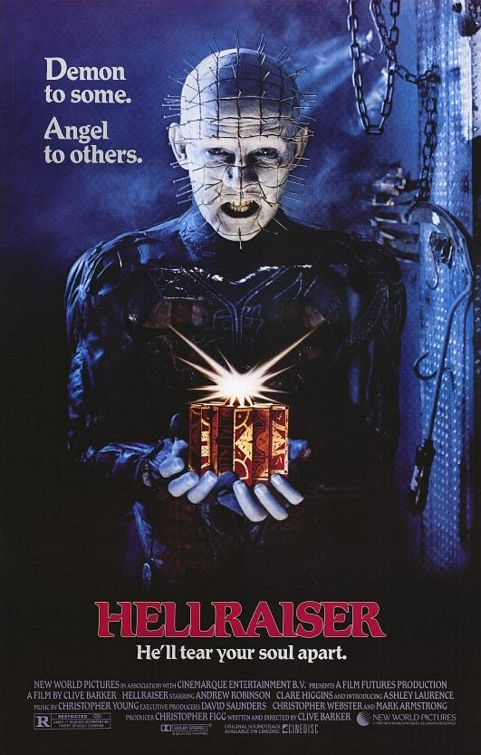 1. The film was originally supposed to be called “The Hellbound Heart” but the studio decided that the title sounded too much like a romance and asked Barker to change the title. Barker offered “Sadomasochists from Beyond the Grave,” which was also rejected.

2. It took six hours just to apply the Cenobite makeup on Doug Bradley.

3. When asked why the effects at the end of the movie were so bad, Barker has long contended that he and a friend did them over over one weekend and that he thinks the FX turned out very well considering the amount of alcohol the two of them drank while doing them.

4. Andrew Robinson (Larry in the movie) convinced Clive Barker to replace the scripted line, “Fuck you,” with the line actually shot, “Jesus wept.”

5. Nintendo developed a video game based on the film. It was planned as one of the first to feature the capacity to save a player’s game and let the player return later to that point in the game. However, it was discovered that the Nintendo console could not correctly interpret the saved game codes, so production was scrapped.

6. The Chatterer and Butterball Cenobites had dialogue in the original script. However, after their makeup was applied, they could not speak coherently. Their lines were then spilt between the Female Cenobite and Pinhead. Pinhead got the better lines which helped to cement his reputation as the film’s trademark character.

7. Clive Barker has always hated the name “Pinhead”. The early drafts listed him as “Priest” and later “Lead Cenobite”. Barker claims that the character has a true Cenobite name that he will one day reveal.