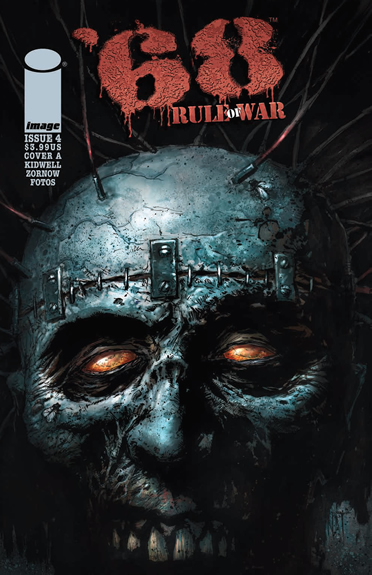 Synopsis: After a month imprisoned in a tiger pit, Agent Declan Rule faces his last torture session with the mad doctor Than Morneau. On Pitt Island NJ, the Kuens begin to get curious in the shadow of a serial killer, and in Vietnam, a psychotic madman named War-Face leads a rotting army of the dead toward Heaven. The only thing standing in his way…is a man they call JUNGLE JIM!

Our Thoughts: Once again the ’68 crew does not disappoint!  The conclusion of 68: Rule of War is nothing short of horrifying. It ends in a perfectly gory manner that fulfills the promise we saw in Issue #1.  That promise being another phenomenal series for horror comic fans from the team of Kidwell, Zornow, Jones and master colorist, Jay Fotos.

The conclusion of the series is a nonstop or savagery, which is stunning and engrossing.  Kidwell always finds new ways to shock and amaze. With some of his more barbaric scenes, I’m not sure whether to give him a standing ovation, or lock my doors.  His attention to detail is such a strength in his writing and really breaks it down to the grittiest of details, which are sometimes the most frightening.

The execution of Mark Kidwell’s demented genius by Jeff Zornow is masterful.   I’m not going to give away any spoilers, but let’s just say pages 15 and 19 are ones that will stick with you…while you are trying to sleep.  Fotos work on the book is right on point as usual.  I also feel the need to mention the artwork on cover -A by Nat Jones, which is a particularly grim portrait that perfectly fits the entire series.

68: Rule of War #4 comes out on July 9th. If you’ve been reading the series, you most likely have it on pre-order.  If you haven’t and you like zombie comics, 68: Rule of War will blow your mind.  Buy it, read it, love it…then have nightmares about it!