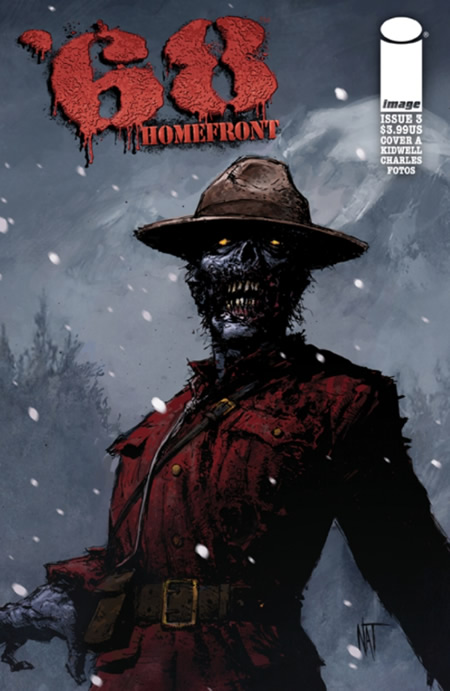 Synopsis: The winter snows run red and the northern lights shine on the dead as ’68: HOMEFRONT travels to Black Falls, Canada for the opening chapter of the all-new two-issue story arc “DODGERS.” Doug and Bobby Hacker, twin teenagers running from the draft, running from the specter of death in Vietnam, find more than they bargained for as slavering sled dogs, rotting Mounties, and a vicious, desperate mountain man bring the undead contagion to the frozen north.

Our Thoughts:  Once again the 68 team brings their “A” game and serves up a healthy dose of gore with an intricate plot.  With the new arc focusing on Vietnam “draft dodgers,” Canada proves to be a cold and bleak backdrop for this new chapter.  Just ask Jack and Cindy…  Mark Kidwell, as usual, is on point with his detailed storyline mixing blood and guts, with a bit of comedic sarcasm at times.

Kyle Charles and Jay Fotos prove once again to be a formidable team. The grittier and more action packed pages in the book are grotesque and gripping at the same time.  The perfect complement to Kidwell’s writing.

’68: Homefront #3 is another dark, disturbing delight served up for horror comic fans and is out November 5th 2015.