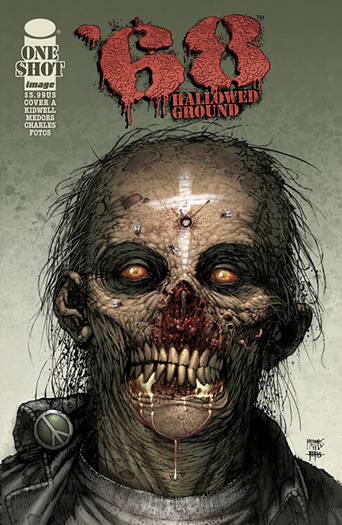 Synopsis: In ’68, the Vietnam War coincided with the rise of flesh-eating zombies. American G.I.s were forced to contend with not just the Viet Cong, but the fact that every fallen ally and enemy soon turned into an entirely new, mindless, and nearly unstoppable threat.   The setting changes from Vietnam to Streiner, Mississippi in February, 1968 in ’68: HALLOWED GROUND. A passenger train derails as a result of a zombie attack, causing the death of hundreds. Survivors of the wreck find sanctuary in a small rural church, hoping to hold out against the coming swarms of living dead. Their only hope rests on the shoulders of two soldiers, both recently returned from Vietnam. One sits in the belfry, taking out zombies from afar, while the other defends the barricaded sanctuary against the onslaught. But will their efforts be enough?

Our Thoughts: “68: Hallowed Ground” is obviously a very special issue as itincludes the last work of the extremely talented Josh Medors. Although his health was failing at the time, his work was obviously not affected.  Putting the sentimental value of this book behind, I read it as an objective comic fan to give an accurate review.

Well, with Mark Kidwell at the helm, it is no surprise at all this issue starts right in the center of gritty and brutal chaos.  The story of the Vietnam vets returning home to another hell is raw and even emotional at times.  Without giving too much away, Kidwell really shows his range.  One of his strengths as a writer has always been conveying a wide range of emotions in extremely grim and gory situations.

The artwork which was done by Medors with Kyle Charles and Jay Fotos is phenomenal.  The attention to detail is amazing. From every tooth on every zombie, to the tone of each blood stain is just incredible. Medors and Fotos were always a dynamic duo, and this is perfect swan song.  I also have to mention the covers which Josh worked on with Nat Jones and an alternate cover by the legendary Bernie Wrightson. Both of these are great pieces of horrific art that could stand alone from any comic.

Whether you’ve read previous issues of the “68 Comic” series or not, it doesn’t matter. “68: Hallowed Ground” is an in your face, action packed zombie comic, which is a gripping read for fans of any comic genre.