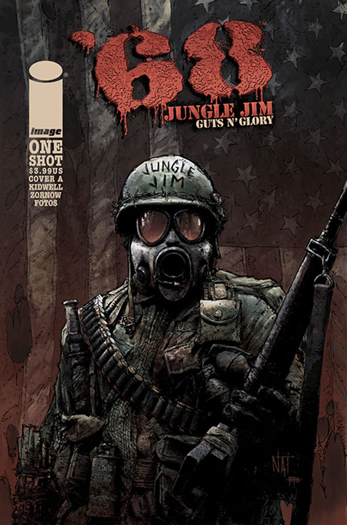 Out on March 4th, is the latest offering from the crew over at ’68 comics.  ’68: Guts and Glory is once again helmed by master horror writer and creator of chaos, Mark Kidwell with the book centering around a familiar friend, Private Brian Curliss.  We caught up with writer Mark Kidwell to give us insight on what to brace ourselves for as this next ’68 one-shot is unleashed.

Horror News Network: The last couple of years have been very busy for the ’68 crew. As the writer, how do you keep the ’68 series in general consistent, as well as have it keep gaining momentum?

Mark Kidwell: Consistency, I think, comes from individual style and all the ’68 books are very much written in my own preferred “style” of storytelling. I tend toward the cinematic when I write comics, thus the “quick” cuts between branching story elements and action. I like to lead readers to certain tipping points in given scenarios, then jump to an altogether different branch of the larger ’68 narrative. That way, you keep readers off their footing, keep them wondering what to expect and when to expect it with each page turn. As far as momentum, ’68 by design is leading up to a big reveal, a big punch in the gut that will bring everything we’ve done in this series full circle. We keep upping the ante with zombie kills, gore and over-the-top action. That’s the kind of horror we all like and the kind of horror we’ll keep bringing.

Horror News Network: For “Guts N’ Glory,” you’re revisiting Private Curliss.  What can we expect in terms of his state of mind at this point?

Mark Kidwell: You’ll see definitively in “Guts ‘N Glory”, that Private Brian Curliss is not quite “himself” anymore. He’s still in there, behind that mask…but he’s been overwhelmed by a larger, stronger personality named “Jim”. Most of what made Curliss Curliss died in a chicken coop in Cambodia (Jungle Jim: HELL HOLE) and a certain haunted gas mask has more or less become his true face. In scientific studies of multiple personalities, it’s very common for the dominant persona to eventually absorb the weaker one(s). You’ll see this taking place in G ‘N G.

Horror News Network: Why do you think the character of Jungle Jim is such a fan favorite?

Mark Kidwell: ‘Cause he kicks ass! That’s part of it…most of it, maybe. But I think there’s something to the whole schism between the gas mask and its wearer. I’ve had fans go on and on at shows about the whole “Jekyll and Hyde” aspect to Jungle Jim – the way he becomes human, tired, scared, sick, when the mask comes off and then how cool it is that as soon as the mask is in place again, he’s a revved up killing machine. I think Jim and his situation lets readers imagine what it might take in a wartime situation (zombies or no zombies) to transform into what you’d need to be to survive.

Horror News Network: You’re working Jeff Zornow, who is back with his bloody madness on this series.  How would you describe the process of working with him?  (If that’s humanly possible LOL!….I’ll take my commentary out of the interview when I post )

Mark Kidwell: Jeff and I have worked together for a loooong time and I think we both know where the other one lies as far as story and horror go. I’ll admit that when I’m writing for Jeff, I’m grinning and tossing in a lot more “in your face” gore elements. That’s because I know what his reaction will be. He’ll read my description and then crank it up from there. If I write…”The zombie’s head splits in two and one of its eyes pops out,” Jeff will inevitably split the thing’s head into four chunks, show its brain hitting the zombie behind it and fling BOTH eyeballs right at the reader! It’s sort of like lighting a fuse without seeing what’s on the other end of it. You just put your hands over your ears and wait for the earth-shattering KABOOOM!

Horror News Network: You always do a really great job of balancing the story, but keeping the issues action packed in really gory way.  Where do some of these ideas come from for the kill scenes?  Should your neighbors lock their doors?

Mark Kidwell: Most of the kill scenes are mine, although everyone involved in the production of the ’68 books has had a hand in suggestions or descriptive scenes that have found their way in to the series. Zornow (as mentioned above) has contributed a lot of extra grue and action and anyone who has been exposed to the ’68 line of books pretty much knows what we’re after in illustrating mayhem. As for me, I’m a big splatterpunk. Big fan of gore and violence in entertainment. If done right and accompanying well written stories with smart dialog, I think gore only enhances true horror. I’m not one’a those, “better left to the imagination” folks (although that can work – see Hooper’s original TEXAS CHAINSAW MASSACRE). So, if you’re shy when it comes to splatter, you should read a quieter Vietnam/Zombie epic. As for my neighbors, those deadbolts click in unison around nine every night.

Horror News Network: What do you think when you see some of the artwork that Zornow comes up with basically interpreting your story?

Mark Kidwell: Jeff always delivers. He sticks close to my scripts (something I’m really adamant about, not because of ego, but we’re telling a lot of story in a little space and every element and page turn is pretty crucial) and puts the effort where it’s most required. He’s a pro and knows when to just move the story and when to stall so the reader can get hit in the face with the big “WOW!” elements. It’s great to see finished pages coming in for edits and we rarely make big changes to Jeff’s stuff. It’s all very smooth, very slick…very red.

Horror News Network: If you had to describe this upcoming one-shot in one word, what would it be?

Mark Kidwell: Can’t. Need two…”Darkly Patriotic”. That’s what G ‘N G is all about. (Also, it ties in very close to the previous RULE OF WAR storyline, falling midway between the action of ROW #4)

Mark Kidwell: Thank you guys! As always, we appreciate all the love and support for ’68 and all of our general ghoulishness down thru the years!