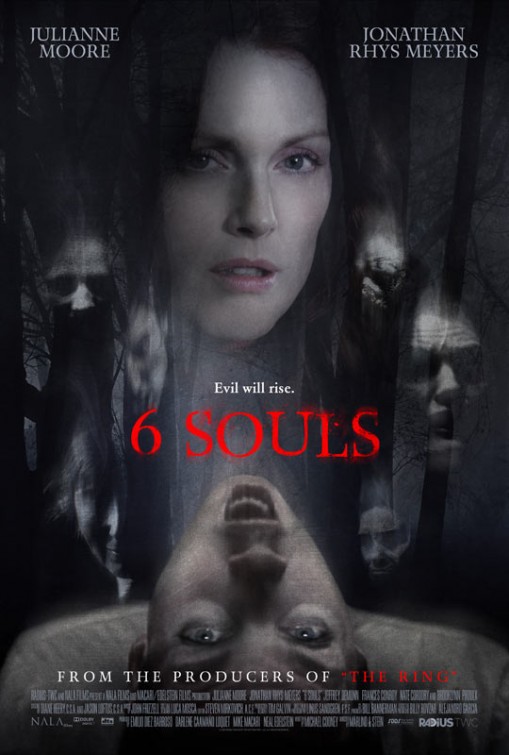 Synopsis:
After the death of her husband, Dr. Cara Harding’s faith is shaken but she clings to her confidence in science. An enigmatic psychiatric patient named David causes Cara to question whether science can solve the mystery of his multiple personalities. Are they manifestations of his psychosis or are they the trapped souls of murder victims?

Our Thoughts:
Though I don’t like to hold a studio’s reluctance to release a film against said film, the fact that 6 Souls sat on the shelf for 5 years (under the title Shelter) does not bode well for the quality of the movie. You’d like to think that the suppressed film is just so transgressive, so mind-blowingly different that the movie industry would be irrevocably changed if it were released on an unsuspecting public. (Hey it’s happened before; just look at when Warner Brothers tried to squash the extraordinary Performance) Unfortunately, the reasons for the studio’s reluctance to get behind this film are entirely justified. What went wrong? 6 Souls has two fine actors in the lead roles (Julianne Moore and Jonathan Rhys Meyers giving meaningful performances), high production values, a great score by John Frizell, and competent direction from Måns Mårlind and Björn Stein. So what’s the problem? The problem will be evident to anyone that has had even the slightest interest in the horror film genre over the last decade: interesting concept, poor script that tries to go in too many directions, and clichéd execution. Here, we have a grieving protagonist looking for something to believe in after a loss that has her questioning her trust in everything. This void leaves her open to the paranormal even though she is a doctor and is invested in the scientific method, reason, and materialism. The patient is a medical and psychological enigma; his condition can’t be explained by science even though the doctor exhausts every test to find a plausible diagnosis. The patient has personal knowledge about the protagonist that he couldn’t logically know. He also has information about various people who are dead, suggesting that their souls reside in his body, manifested as other personalities. If you guessed that in order to “save” her patient and find some personal closure, the doctor needs to have faith and open herself up to the reality of the supernatural, you’ve been watching way too many mediocre horror films. Actually, I made the plot a lot more linear in my summary because the movie is all over the place with plots about a reverend’s revenge, a “Holler's Cross,” sucking out souls, and way too many character and personalities to keep track of. I admire the ambition of the script, but the film seems to confuse piling on every psychological, serial killer, and metaphysical thriller cliché with creating and sustaining visceral suspense and mood. Formulaic but not unwatchable.