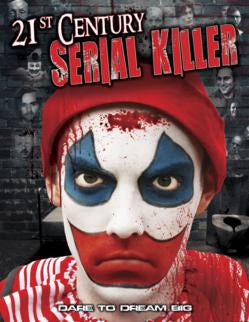 First off, I’d like to thank Chemical Burn Entertainment for ending my movie-reviewing year off on the right note.  While I’m known to have a love/hate relationship with that company, their 2013 release 21st Century Serial Killer has restored my faith in their work.  Too often nowadays, independent horror cinema feels the need to turn the volume button up way too far, or not nearly far enough.  There is something to be said for staying true to your cinematic design and not purposely straying into the bizarre or obscure.  Director Henry Weintraub creates a surreal and familiar world where serial killers and mass murderers are seen more as luminaries than criminals, and uses the popular device of satire to lampoon the growing status of tabloid celebrities.

21st Century Serial Killer (originally produced by 531 Production under the title Killing Me) tells the story of Aaron Schwartz (Patrick O’Driscoll), a suburban schmendrick who got bored of all previous hobbies (guitar player in a band, sports, etc.) and developed an unhealthy fascination with random murders and those who commit them.  His timid and kind nature prevent him from carrying out any of his devious plans, and in fact lure him into a dull family existence when he meets his future wife, also named Erin (Sonya Davis) by happenstance.  While routine breeds content, the appearance of a real local serial killer sparks his passion for killing again, as he sets out to study (and eventually work with) the elusive murderer.  But first things first…..who is it?  Although, to me at least, the answer was a bit predictable, the answer still doesn’t take away from this film’s ability to have a good laugh (at both itself and the audience) and at the same time nail down the mindset and the psyche of a serial killer perfectly.  Of course, I’m not speaking from experience…..but you get the idea.

Weintraub does a commendable job in making light of a serious and dark subject matter.  Though he’s not the first to tread these waters (Showtime’s Dexter comes to mind), he does pull off a more entertaining movie than other big-budget productions were able to achieve (Mr. Brooks comes to mind).  The send-ups to the more infamous serial killers our society has produced (Gacy, Bundy, Son of Sam, etc.) can be viewed as both a perverse homage as well as ludicrous fodder that belittle those heinous acts.  The tone throughout 21st Century Serial Killer is both comical and deranged, though it makes sure not to wander too intensely in either direction.  O’Driscoll’s portrayal of the main character Schwartz is very monotonous and maddening, two traits that may often go hand-in-hand with horror film leads with varying results.  In this case, he pulls it off.  If I had one bone to pick, it might be with the dubbing of the dialogue.  Is this a major issue?  Not necessarily, and it certainly is not enough to take me out of the story one bit.

As the year 2013 winds down, I feel better knowing that my last assignment of the year was a good one.  Chemical Burn and Weintraub have a winner here, and a film that fans of both horror and dark comedy movies (along with the satirical parody afficianados) can get behind.  In the same vein as last year’s The Selling, 21st Century Serial Killer is well worth your time.