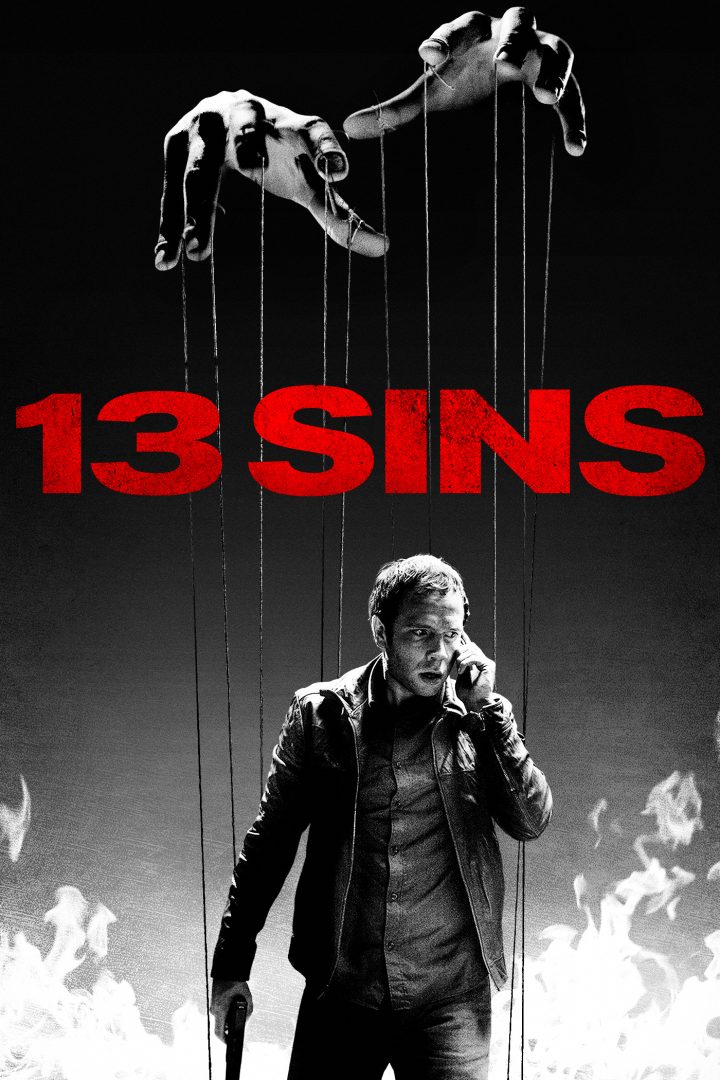 What do you have if you mash up Saw with Series 7, with a bit of The Game thrown in for good measure?  I’d love to say you’d have Dimension Films’ thriller 13 Sins…but the fact is I would not be doing this movie justice by simply labeling it as derivative of earlier, similar films.  13 Sins truly stands on its own, with a winning combination of cringe-worthy scenes and admirable suspense throughout.  While many would be surprised to learn that Uwe Boll had nothing to do with this production (the occasionally over-the-top content will force you to question that statement), director Daniel Stamm (The Last Exorcism) should be commended for creating an entertaining and engaging thriller on an independent film budget.  This is no small feat in today’s increasingly-expensive Hollywood atmosphere that dominates modern cinema.

The subject matter may seem familiar (down-on-his-luck everyman begrudgingly accepts a challenge that tests his emotional, physical, and law-abiding limits in order to feed his family), but 13 Sins blows a breathe of fresh air into the genre.  While other more notable films have explored this particular world with varying degrees of success (12 Rounds, along with the aforementioned Series 7, Saw and The Game), this film is more successful at presenting a lead (bumbling Elliot Brindle, portrayed by Storytelling‘s Mark Webber) that is relatable, interesting and understandably conflicted.  Who hasn’t been there before?  His father hates how he turned out, he just lost his job, other family members are completely reliant on him….and oh yeah, he has a wedding to plan (and more importantly, pay for) with his fiance Shelby (Rutina Wesley).  These are all stress-filled situations that many of us find ourselves in, with the hope and dream of a mystery phone call offering to solve all of our problems filling our heads.  Elliot receives the mysterious phone call, and is ordered through a series of unique and dangerous task (13 to be exact, hence the title of the movie) and begins questioning his desire to continue more and more as the casualties and felonies begin to mount up.  The tasks begin as bizarre dares, but quickly elevate to all-out chaos and deadly carnage.  This sense of mounting gloom and rising anxiety is a particularly effective device here, as Stamm rises to the occasion and constantly has the viewer wondering what’s next.  Family members and innocent bystanders alike become pawns in Elliot’s play, forced into this shadowy world of blood and deception that continues despite his insistence to quit immediately.  The “game” hints at a much larger world-wide conspiracy, using the non-elite as nothing but puppets.  Further twists on this idea exist throughout, but I won’t spoil a well-made movie by providing any in this review.  It’s recommended by me that 13 Sins be given a chance to entertain you on its own.

First off, I’ve always been a fan of Mark Webber though he certainly isn’t the same kid that graced Todd Solondz’s excellent Storytelling or the underrated late ’90s flick Whiteboyz.  He’s grown up, but still possesses that boyish sensibility and “aw shucks” personality that endears him to the audience (which is perfect in this film).  The rest of the cast also do well here, including True Blood‘s Wesley and Ron Perlman, currently a hot commodity on television (again) with the popular show Sons of Anarchy.  They all paint a picture equally, making you wonder who are the good guys, who are the bad ones, and who actually runs this real-life game.  Make no mistake, it’s Webber’s movie…..but the cast play their pawn roles perfectly.  The violence and gore take a while to show up, but as a horror fan you won’t be let down.  The fact that the entire film takes place within a relatively quick period of time (just around 24 hours) ensures very little break in the action.  This is smart, as it prevents the viewer from getting too comfortable (and thereby, complacent) before being forced to process yet another plot point.

Is the end predictable?  Perhaps.  Have the bigger budget mainstream flicks produced a better product with more mass appeal?  You can certainly argue that.  But what 13 Sins lacks in embellishment and hype, it more than makes up for in entertainment value.  The last time I checked, we all went to the movies to be entertained…..unless you were in the same theater as Pee Wee back in the early ’90s.  But I digress…..
Now I would be disingenuous if I didn’t mention that I have never seen 13: Game of Death before (the 2006 Thai film directed by  Chookiat Sakveerakul, from which 13 Sins is based).  But in my travels, I find it beneficial more often than not to begin any journey with no preconceived expectations in order to be as objective as possible.  I learned that from Rob Zombie’s attempt at the Halloween franchise re-boot.  But 13 Sins is not a victim of pace, employs numerous visual stunts to wet the average horror fan’s appetite, and features a strong cast (I still haven’t even mentioned others like Pruitt Taylor Vince and Tom Bower) that push the action along and can hold our interest.  13 Sins is not a victim of an overzealous director or over-reaching actors….quite the opposite.  I’d recommend this film to anyone that has an open mind and can appreciate the texture behind a movie’s intended purpose.  At the end of the day, it’s a great effort by Stamm, Webber and the rest of the crew.