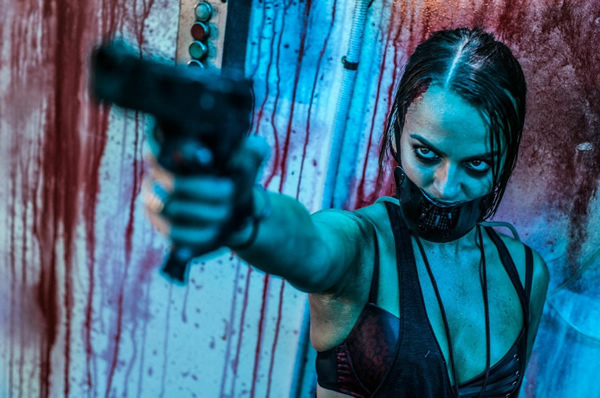 One of our favorite movies this year has been the Australian horror film, Wyrmwood. The post-apocalyptic horror film set in Australia is the perfect blend of Dawn of the Dead meets Mad Max.

We caught up with Bianca Bradey, who plays “Brooke” to talk about her role in Wyrmwood.

Horror News Network: How did you get involved in Wyrmwood?

Bianca Bradey: My flat mate at the time was working with the director, Kiah Roache-Turner. We met up to chat about the film and had the exact same vision for Brooke. We saw her as Joan of Arc crossed with “The girl with a dragon tattoo”. A dream role. And so when he asked me if I would like to be involved, I jumped at the chance! You would have to be crazy to say no.

Horror News Network: What drew you to the role of Brooke?

Bianca Bradey: Brooke was just awesome. I was drawn to her inner strength and intense survival instinct. She was tough, independent, resourceful and enigmatic. But at the core she is still a human being, with fears and weaknesses, and her love for her brother and his family really drives her.

Horror News Network: Did you do anything special to prepare for the role?

Bianca Bradey: A lot of my preparation was in developing the physical aspect. I did some kickboxing with an MMA trainer. It’s a very physical role, and I just wanted to be prepared for it. Before each take I would run around and jump up and down, get my heart rate up, basically just running on adrenalin.

Horror News Network: There was no shortage of blood and guts in Wyrmwood. Can you describe how it was shooting the scenes with Berynn Schwerdt who plays “The Doc”?

Bianca Bradey: I absolutely loved working with Berynn. We had so much fun playing around in those scenes. Every time he would give you something different. So basically my reactions were completely spontaneous. You never knew what he was going to do! A consummate psychopath. It was also very challenging. Tied to a wall, can’t move your arms or legs, gagged and unable to speak. Basically having to communicate every though and emotion through your eyes. And I just hope it all gets across to the audience. …All this while covered in copious amounts of fake sweat.

Horror News Network: Wyrmwood was your first true horror film. Can you talk a bit about how it compares against other film genres?

Bianca Bradey: I think Wyrmwood stands alone as a completely unique piece of film making. Yes, they have referenced some of the greats, but I think they put their own spin on it. Describing Wyrmwood to people is always interesting. Because it’s an action comedy buddy on the road film, with amazing Aussie humor thrown in. And it just happens to be the apocalypse, with some flesh eating zombies thrown in there.

I think making a horror film is a lot of fun. It doesn’t take itself too seriously.  It isn’t a drama with some great life message thrown in there. It is unapologetically kitsch.

Horror News Network: What has been the most surprising thing for you when it comes to critics reactions to Wyrmwood?

Bianca Bradey: I think it’s just the variety of people’s opinions. Everyone has a different take on the film. Some love it. Some hate it. What I think has surprised me most is how well it has been received worldwide. You never know if the rest of the world is going to get our Aussie sense of humor, and appreciate what we were trying to say. The fact that people are talking about it and recommending it to their friends is amazing and surreal and wonderful. I couldn’t be prouder to have been a part of it.

Horror News Network: What’s next for your acting career?

Bianca Bradey: At the moment I am acting in an online web series called “Starting From… Now!”. We have just aired the 3rd season, and all up the whole series has had over 7 million views. This is amazing for a small independent series from Australia. Ultimately, I would love to be doing more films. So we will see what happens next!

Horror News Network: Where can our readers find out more about you?

Bianca Bradey: All the usual online and social media places, Instagram, Twitter, IMDB…. And hopefully through more work in the future!

Horror News Network: Thank you for your time, Bianca! Best of luck to you.

Seven-Minute Preview Arrives For Wyrmwood: Chronicles of the Dead - Horror News Network - Complete Coverage of all Things Horror! May 20, 2017 - 2:20 am