After a brutal first episode (and an even longer “Who Shot J.R.?” cliff hanger to end season six), I thought that the show would begin doing what in the past it did best: making viewers feel connected to Rick Grimes’ “band of brothers” and bringing real drama into the lives of the survivors that allowed for character development and real (not contrived) drama.  So far, this season has been one long first episode, hitting the same notes that were abundantly displayed in Season Six’s final episode and this season’s first. 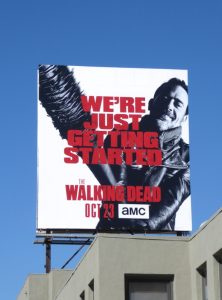 Much has been written about Glenn’s (Steven Yeun) and Abraham’s (Michael Cudlitz) execution scenes and the aftermath that followed.  The introduction of Negan (Jeffrey Dean Morgan) established him as “the worst yet” and clearly demonstrated why even a “stone cold” Rick Grimes (Andrew Lincoln) would cower in front of him. Many viewers of The Walking Dead are not typical horror fans and were not used to the tension and violence that was used to introduce Negan, which led to a sharp dip in ratings the following week.  As a life-long horror fan, the brutality did not turn me off, as I understood the purpose of it in the context of the show; what did turn me off was the same level of menace in almost every episode to follow and the same tactics from every member of the Saviors who appear to be nothing more than less-comical Negan clones.

The vast majority of episodes hit viewers over the head with the simple premise that Negan had emasculated Rick and any other individuals that work for him.  I’m somewhat o.k. with Negan doing this, but when every “soldier” in his army has the same tactics, with none of the personality that makes Negan engaging, I need a break.  Critics may say that this type of treatment is necessary to establish the nadir of the heroes (Grimes in particular), but that works in a two hour film and doesn’t work so well over 10 slogging hours of television.

This season has followed the source material more closely than it has in years, but the portrayal of Negan works better in the comic book than it does on screen.  His  mannerisms and jokes work better on paper than they do in the voice of Jeffrey Dean Morgan.  Morgan is an accomplished actor (and from what I understand from the convention scene, a real sweetheart with fans and a generous autograph signer) but Negan works best in the comic when he expresses a wide range of emotions, and it appears that AMC’s Negan is “all jokes all the time”.  Negan is a complex character in the comic book because readers see different sides of him, and legitimately buy his concern and admiration for his opponents.  As one of Morgan’s other famous comic characters adaptations would say, (Eddie Blake “The Comedian” from The Watchmen)  “It’s all a joke” when it comes to this take on the fan favorite villain.

Aside from the extended punishment that is on display continuously in this season, the Kingdom and Tara’s episode came across as underwhelming (and really AMC, with all the money that this show brings in are you telling me that you can’t afford a real tiger in those scenes…) and not the needed break from tension that fans were looking for. 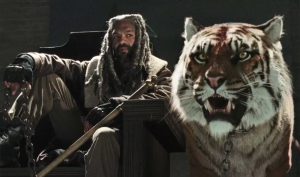 The best episode by far this season was “The Cell” and it succeeded because it felt like older episodes of the series.  The psychological shackles that were placed on greasy loner Daryl Dixon (Norman Reedus), and his subsequent transformation, were a breath of fresh air.  His debasement seemed authentic and helped to establish a new depth for the character that was lacking in the majority of the other characters “under the thumb” of Negan.

The final mid-season episode promises war and action galore (after an abrupt realization on Rick’s part that he needs to be a fighter again) in the second half of Season Seven and it may be exactly “what the doctor ordered” in terms of ratings and a sense of redemption/relief for long suffering fans (and at least we don’t have to wait six months to solve any “mysteries” this time around…).  Stay tuned to Horror News Network for more news and opinions on the Walking Dead and everything else horror.

When The Walking Dead franchise finally arrives on the big screen, it looks like mainstay Rick Grimes--who hasn't been seen since the ninth season...
Read more

In other news, MORE DELAYS but an extension as well. According to Deadline, AMC has pushed NOS4A2 Season 2's premiere from Sunday, June 1...
Read more