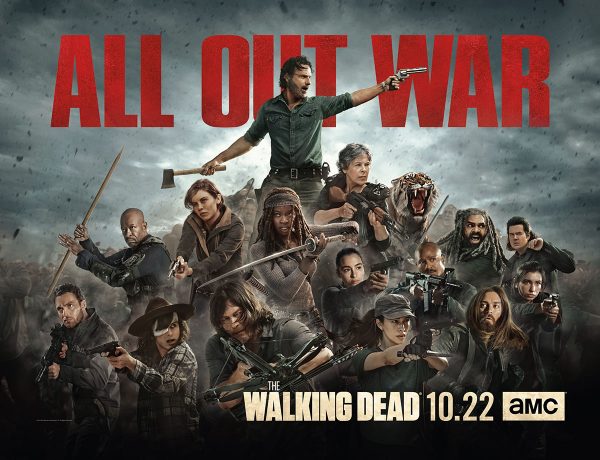 I originally planned on skipping this review, but my HNN colleague John Evans recommended that I use the same stream of consciousness method that I applied to American Horror Story: Cult earlier this fall.

So, I present to you my segment by segment reactions to another season opener:

#1: The title of this episode is “Mercy”, but I wish it was “Mercy, Mercy, Mercy!!!” which seems like another perfect saying for the manic, happy go-lucky Negan.  In fact, I think he has probably said it already… This episode starts with not one, not two, but three “win one for the Gipper” speeches from Rick, Ezekiel, and Maggie.  We get it; one is sufficient.

The music again sounds like it was ripped directly from the John Carpenter archives and whether consciously or subconsciously, the entire episode plays like a forgotten action movie from the 1980’s.   The corrugated metal on the cars, the shoulder pads, the peach colored sun glasses and twizzlers are equal parts Road Warrior and Buckaroo Banzai.

My favorite part was when Daryl shot an arrow with a note on it to their “inside man” at Negan’s base. The “mystery man” reciprocates with his own note shot from a crossbow, but it appears that they both could have whispered or mouthed the word “tomorrow” because they are standing about ten feet away from each other.  This is the perfect example of one of the many unnecessary “cool kid” scenes that at one time would have felt very out of place on the Walking Dead.  Not anymore, unfortunately…

I’m pretty sure that the segment ends with the flash-forward Lost style moment which is sure to give conspiracy theorists and those still wondering if the top falls or keeps spinning in Inception busy for days. “Old Man Grimes” appears to be at a palatial estate, recuperating, while Weird Al Yankovic’s “Another One Rides the Bus” plays in the background. That’s right, Weird Al.  There are also close-up shots of a cane and flowers.

#2: We come back from the break with Carl attempting to help a scruffy, delusional man.  Rick steps in and scares him away.  They argue for a bit and the only thing I can think of is David Leibe Hart’s video for “Father and Son”(featuring the insightful lyrics: “I’m the best Dad. No, I’m the best son”). 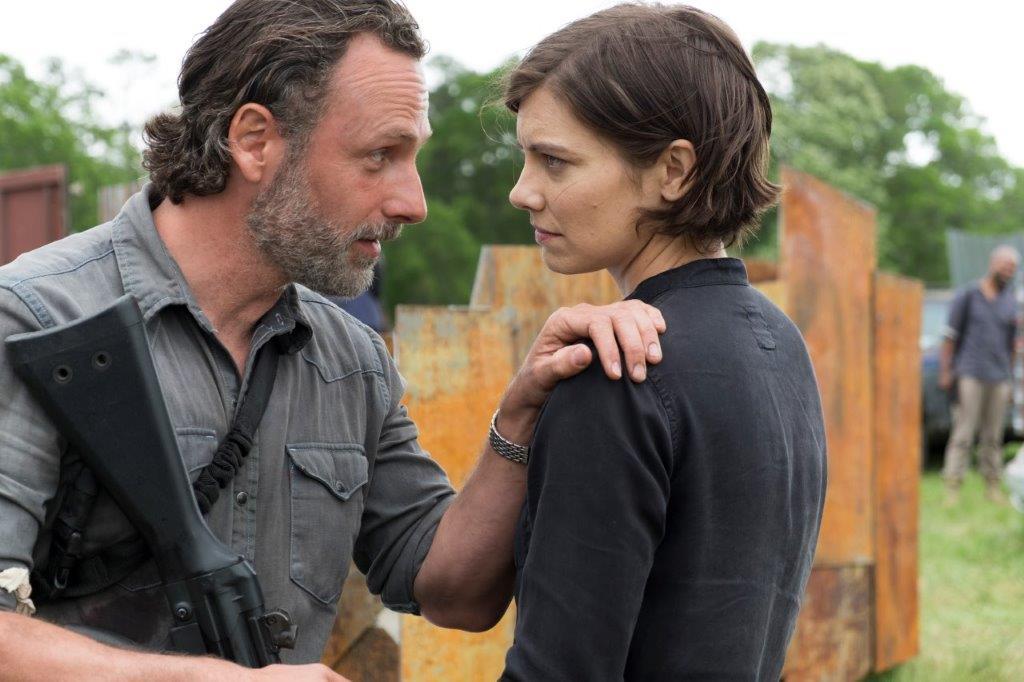 The The Carpenter-esque score amps up with the “bump, bump, bump, bump” sounds getting even more obvious.  We are treated to a montage where Negan’s guards are assassinated one by one and then Rick literally crosses them off a grocery-style list.  The viewer gets to see every name crossed out (for those completists out there).  Rick and Michonne share a very unromantic, unconvincing kiss goodbye.  Does anyone believe that they actually like each other?

#3: The metal caravan gets a move on, but not before another “stirring” speech from King Ezekiel.  This character’s dialogue would make the people who run Medieval Times embarrassed and the delivery of these lines is no better.  He actually says “On this day, we reshape the world”.  If the new world consists of Renaissance Faire rejects like this one, please feed me to the zombies.

The good guys finally show up at Negan’s place and he coolly comes out to greet everyone.

#4: Back to the “dream sequence”.  Rick is now wearing a kimono and shows up for a hearty breakfast with Michonne and his son.

Thankfully, these mystery segments are brief, and we get back to the action! As expected, there is a lot of scenery chewing by Jeffrey Dean Morgan, but what else is new?  His portrayal of Negan is starting to rival Jared Leto’s Joker impression from Suicide Squad.  I’m just hoping he breaks into “Come’re Baby!” soon.  Negan also trots out Gregory who fled from the Hilltop when Maggie took over.  This character is useless at this point.  He does get pushed down some stairs for his troubles, but don’t we have enough characters on this show?

I also noticed that when people are ready to start shooting up a place, it seems to require a lot of nodding.  I did like Rick’s counting trick, but it didn’t help too much in the long run.

#5: The cut from the previous scene occurred at a strange place as we come back to guns blazing (which actually starts at the end of the last scene).  We also get to see Daryl blow up some things in a true operatic fashion, with his greasy hair blowing in the wind.  He’s actually herding zombies towards Negan’s stronghold if you still care at this point.

Negan sneaks away and a lot of windows are shot out for some reason.  Rick almost gets Negan.  Shucks, I thought he had him!  He does take a Polaroid picture of him though.  Gregory pops up again after his tumble down the stairs and steals poor Father Gabriel’s truck.

#6:  The last segment is an attempt at some non-linear storytelling.  We get the flash forward dream again (which is annoyingly shot like Robert Redford’s version of the Great Gatsby, with an overexposed white light at the edges of the frame-check out the image below, it isn’t poor quality, it is what the screen actually looks like in this segment) and then back to the start again with a continuation of Rick’s speech to his troops. 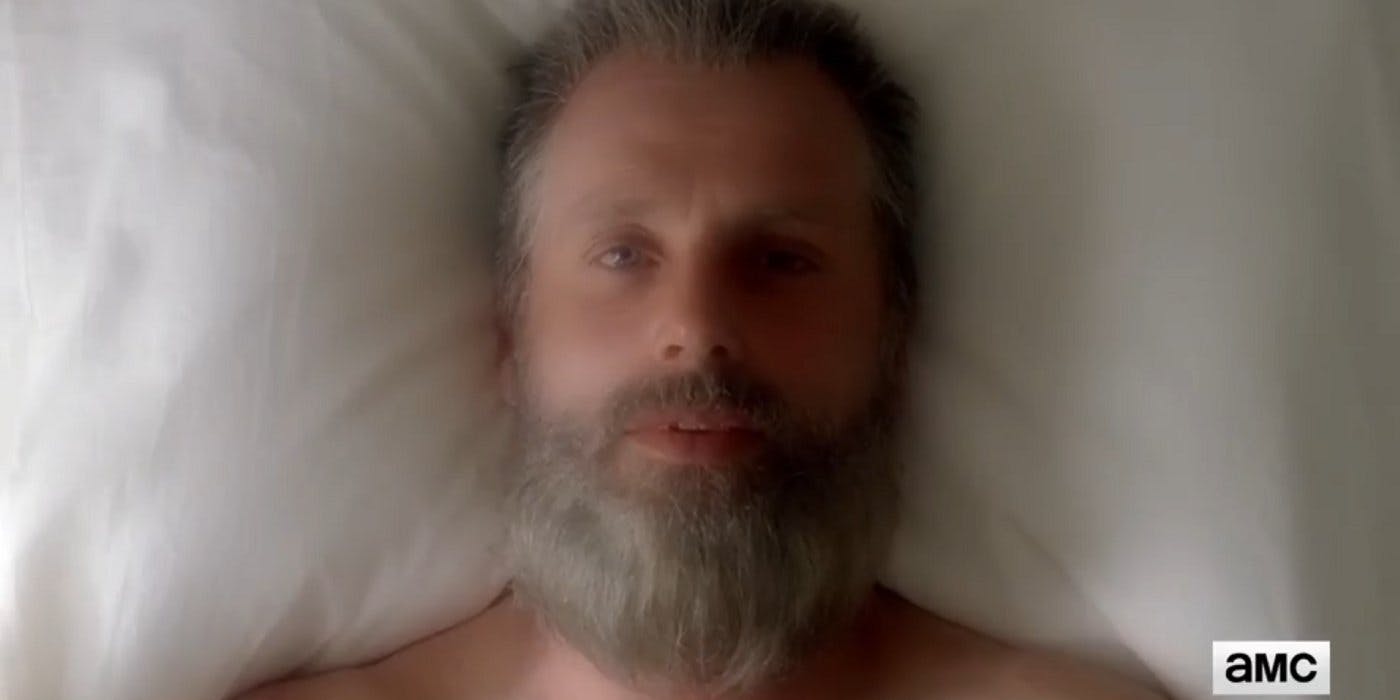 The episode ends on a cliff hanger of sorts that shows that Father Gabriel is now trapped in an enclosed space with, gasp!, Negan.  I won’t spoil the exchange that Negan has with Gabriel, but it involves pants and going to the bathroom in them, which could have been plagiarized from any elementary school playground in America.  The dialogue is just that good.

Unlike American Horror Story: Cult, I will be watching the rest of this season, but I’m not happy about it.  I have little hope that this story will ever get back on track and if the first episode is any indication, we may be in for a long season…