The Walking Dead will officially premiere October 23rd on AMC. You can view the new trailer below, along with the full press release.

International Premieres of “The Walking Dead” Season Seven to Air

Within 24 Hours of U.S. Broadcast Across All FOX Channels Outside the U.S. 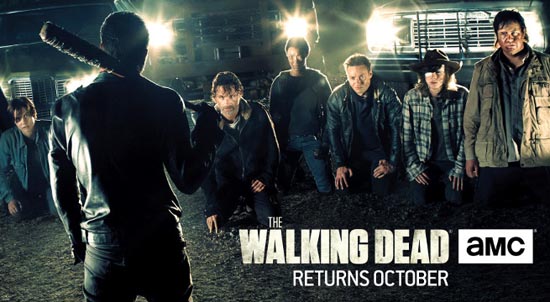 SAN DIEGO, CA – July 22, 2015 – AMC announced today from Comic-Con International that “The Walking Dead” season seven will premiere Sunday, October 23 at 9:00 p.m. ET/PT.  As in previous seasons, the show’s seventh season of 16 episodes will air in two parts, with the first eight episodes kicking off October 23 and the final eight returning February 2017. Following “The Walking Dead” will be the season premieres of AMC’s “Talking Dead,” hosted by Chris Hardwick (Nerdist), at 10:00 p.m. ET/PT, and “Comic Book Men” at midnight ET/PT.  Internationally, “The Walking Dead” will return on FOX channels to audiences in 125+ markets within 24 hours of the U.S. premiere, as part of FOX’s continued commitment to broadcast the series near day-and-date globally.

Today at 1:00 p.m. PT is AMC’s “The Walking Dead” Comic-Con panel event, moderated by Hardwick, and the season seven trailer premiere in Hall H.  Following the event, the trailer can be viewed at https://www.youtube.com/watch?v=SmUz88zoIg0, along with the new trailer for “Fear the Walking Dead” at https://www.youtube.com/watch?v=RtAyQeDygaM.  At AMC’s “The Walking Dead” booth (#4237), fans can stop by to take photos of themselves among Negan’s (Jeffrey Dean Morgan) infamous “lineup” from the season six finale.

Also, tomorrow at 7:00 p.m. PT in Hall H, Kevin Smith will discuss the sixth season of “Comic Book Men,” for which he serves as executive producer, as well as his new late-night talk show, “Geeking Out,” which he co-hosts with Greg Grunberg (“Heroes, “Heroes Reborn” “Star Wars: Episode VII – The Force Awakens”). “Geeking Out,” which takes a timely look at pop culture through a fanboy lens, premieres with a special Comic-Con episode on Sunday, July 24 at 10:00 p.m. ET/PT.

AMC also announced two “The Walking Dead” special programming events hosted by Hardwick. A “The Walking Dead Season 7 Preview Special,” which will give fans an early look at what to expect in the upcoming season, including exclusive interviews with the cast and executive producers and behind-the-scenes moments, premieres Sunday, August 14 at 10:00 p.m. ET/PT. A two-hour “The Walking Dead” Recap Special” (working title), a retrospective on the series’ acclaimed six seasons, premieres Sunday, October 16 at 9:00 p.m. ET/PT.

The season premieres of “The Walking Dead” and “Talking Dead” will coincide the network’s annual blockbuster marathon of thriller and horror films, AMC Fearfest.  Celebrating its 20th year, AMC Fearfest will feature themed programming and more than 60 films, running from Sunday, October 16 through Tuesday, October 31

With the massive success of Netflix’s “Stranger Things,” it’s no surprise to see it represented heavily by cosplayers at a convention like SDCC where...
Read more

Horror Found All Around SDCC

San Diego Comic-Con doesn’t just fill a massive convention center, it spills out into the surrounding area with pop-up activations from networks like FX...
Read more