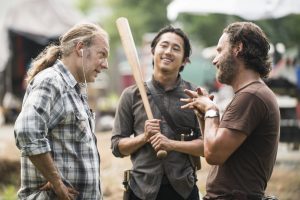 Fans may disagree with Hurd’s assessment (that the show does not traffic in “torture porn” at times), but also agree with her decision to move away from grisly scenes like the one in the season opener.  As reported in Horror News Network in November, The Walking Dead did suffer their greatest ratings decline in the history of the show after the controversial first episode of season seven.  The first episode featuring the “slap-happy” Negan and his unfortunate victims garnered 17 million viewers.  The second episode of season seven dropped to 12.5 million and has hovered around 10.5 million viewers in the second half.

Time will tell if this move was made to appease mainstream fans or if the producers behind the show are reaping the rewards of not only an excessively violent debut, but also an angry fan base that just recently had to wait nearly five months (and 25 minutes into the first episode this season) to find out “Who Shot J.R.?” (or Glen and Abraham in this case).