Haig had a long and storied career in Hollywood, with nearly 150 television and movie credits dating all the way back to the early 1960’s.  For horror fans, he really began to hit his stride beginning in 2003, as he portrayed his most iconic screen character, Captain Spaulding, in Rob Zombie’s first feature film, 2003’s House of 1000 Corpses.  Zombie would go on to cast Haig in important roles in nearly all of his subsequent films, including House sequel The Devil’s Rejects (2005), the remake of Halloween (2007), and The Lords of Salem ( 2012).  Haig even reprised his role as Spaulding/Johnny Lee Johns for the upcoming film Three From Hell, which is due to be released on VOD in October.  Haig worked with the likes of Hollywood heavyweights from Lucille Ball to Robert Duvall, Pam Grier to Quentin Tarantino throughout his impressive career spanning six decades.

Most importantly, Sid Haig was a great man and very appreciative of his fans everywhere.  In 2017, Mr. Haig was a guest at CT HorrorFest in Danbury, CT.  He also hosted a pre-show screening of House of 1000 Corpses for a sold-out house, and participated in a Q&A afterwards.  The Q&A that HNN conducted with Sid Haig can be viewed below.

Mr. Haig will be missed dearly by all of us at HNN, as well as his many loyal fans throughout the world.  Rest in Power, Sid. 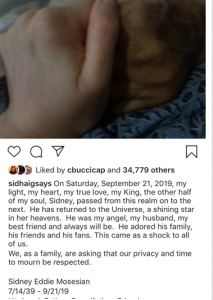 We reported on June 26th that Rob Zombie teased that a limited edition Firefly Family Trilogy Blu-Ray Steelbook will be coming soon, and now...
Read more

Rob Zombie announced to his fans that a Firefly Trilogy will soon be available in the form of a limited edition Blu-Ray Steelbook package. The...
Read more

Just six horror movies in the history of cinema have ever been nominated for Best Picture by the Academy (counting Black Swan and Get...
Read more