Ever since Barbara Leigh appeared on the cover of Vampirella Magazine #67 in March of 1978, the vampiric alien from Drakulon has been brought to life by a number of different models across a number of different eras.  This trend continued even when Warren Publishing ceased to exist and comic publishers Harris and Vampirella’s current home, Dynamite Entertainment, took over the reins.  With the celebration of the 50th anniversary of Vampirella and a new series by Christopher Priest and Ergun Gunduz, it was only natural for one of the many covers of the newly launched series to feature a photo cover of one of the most recognizable characters in the history of comics.

Professional model and cosplayer Erica Fett was lucky enough to land the cover to issue one of the new series and she was able to spend some time with us discussing the opportunity and what it was like to become the character for a new generation of fans.

Horror News Network: How did you get the opportunity to appear on the cover of the new Vampirella #1 cover?

Erica Fett: I emailed Dynamite across social media and a few months later, they reached out about the opportunity.

HNN: Was this your first time dressing as the character?

Fett: I dressed up as Vampirella a few times before this official cosplay shoot during some casual shoots!

HNN: Vampirella is one of the most instantly recognizable characters from horror comics and is also one with a long association with models.

Why is she such an iconic character and choice for models/cosplayers?

Fett: She’s incredibly smart and sexy!  Plus, who doesn’t want to be a vampire!

HNN: How did you become involved in cosplay?  First costume?  How did it turn into a business for you?

Fett: I’ve cosplayed since 2012 and my first costume was Poison Ivy.  I started incorporating more into my business by infusing more of my cosplay and the characters I liked into the boudoir aspect of my modeling.

HNN: Favorite character that you have cosplayed as?  One you are looking forward to dressing as?

Fett: My favorite character I’ve cosplayed is probably Dolores from Westworld.  I’m looking forward to cosplaying as Lara Croft and Spider Gwen next!

HNN: You have many fan interests (as evidenced by your many tattoos and pictorials), but is there one that is near and dear to your heart?

Fett: All of my tattoos have some sort of meaning to me, but my favorites are probably the ones of my pets.

Fett: My next appearance will most likely be at New York Comic Con in October!

Vampirella #1 is currently on sale at finer comic book stores everywhere (and you can read our review of the first issue right here).

Be sure to connect with Erica on her official website, and various social media outlets. 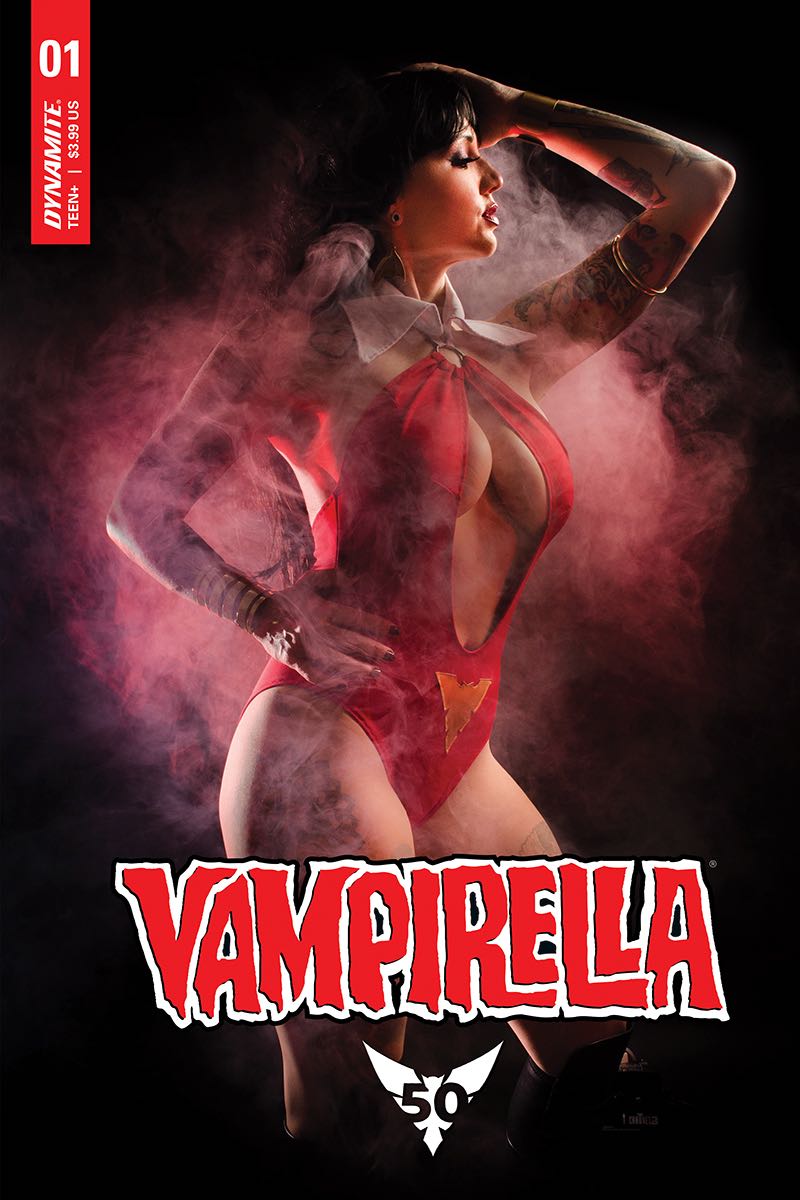 If you ever wondered what Vampirella might look like as a zombie, this October could be your chance. Dynamite Entertainment announced that DIE!NAMITE will...
Read more