Horror News Network: So what have you been working on since we spoke last regarding Vampirella?

Buzz: You see, 25 years ago, I was known and popular for relaunching the character in a book called Vengeance of Vampirella.  This year is the fiftieth anniversary of the character and Dynamite Comics decided to relaunch the self-titled series, which is wonderfully written by Christopher Priest, and then they decided to relaunch Vengeance, which is more action-packed and the original writer returned as well and picked up the story from the original in 1997.  So older fans and the new fans can enjoy the series.

They asked me to do some covers to relaunch the series since I was the original artist on Vengeance of Vampirella and there are a ton of variants, including the one for Rhode Island Comic Con which is a tribute to the Joe Quesada did for the original first issue.

HNN: What was it like going back to that story line after so many years?

Buzz:  Well, I am not doing the interior work on the series because my schedule wouldn’t allow me to do a monthly book, but I do enjoy drawing the covers.  I do get to read the script, and the new artist is doing a great job on it.  The regular title was always  a study of the character and looked at how the character had an impact on pop culture and the characters surrounding her.

Vengeance was always more of an action-packed horror adventure series when it came out in ’94.  It was always planned that way because when she was in the magazines in the 60’s and 70’s, there was a time there when she was more of a prop; you know she looks great, put her in “damsel-in-distress’ type situations, and Van Helsing comes over and helps her and all of that.  That’s why it was cool to see her center stage in Vengeance and kick ass.  So now you have two titles to satisfy everybody.

HNN: You also did a cover for Batman and the Maxx, correct?

Buzz: Yes, when Batman and the Maxx series started last year, Sam Keith invited a few artists to do variant covers to help launch the crossover comic and it was an opportunity to do some cool stuff.  Hey, it’s a Batman cover!  What am I am going to say no to that?

HNN: Have you ever drawn the Maxx before?

Buzz: Oh ya, I’m a huge fan of the character.  It was one of my favorite Image titles because it looked very different from the other Image books.  You get tired of all the boobs and biceps after awhile, and there’s The Maxx in the middle of it, this quirky, very trippy book and it was adapted into a popular MTV animated series.  So it was an opportunity to work on two characters that I really do enjoy.

HNN: What else have you been working on?

Buzz: A lot of covers.  I do want to do interiors, but I don’t want to do a monthly, so I am talking to Tom Sniegoski, who wrote the original series, about maybe doing a special or one-shot where I get to illustrate the interior, as well as the covers.

I am also working with Joe Benitez on a three issue series for Lady Mechanika.  The cool thing is that it is not in continuity and it is a self-contained story.  We’ve been friends for over 25 years and we both always wanted to work together, but we were always working for someone else, so now with Lady Mechanika, it’s Joe’s property, so he can say “Hey, I want my friend to draw this book” and we can take two years to do it.  You can’t do that when it is someone else’s character!

Also, back in June, Stan Sakai started a new Usagi Yojimbo color series through IDW and I was lucky enough to be asked to do a variant cover.

Buzz:  Yes, it is a homage to Toshiro Mifune’s Yojimbo, with him contemplating and rubbing his beard, and that was also a success and sold out. 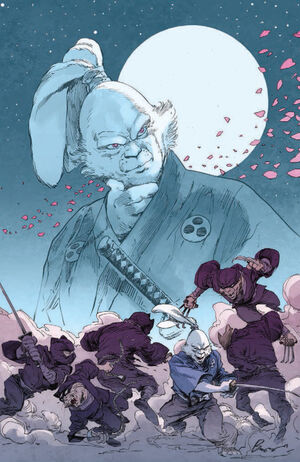 Vengeance of Vampirella #2 is currently on sale at finer comic shops everywhere.

Ever since her revival in 1992, Vampirella has been a fixture on comic book store shelves and in the hearts and minds of horror...
Read more