For the fans who have kept up with her adventures in the four-color format, Vampirella has had a long line of writer and artists associated with her since 1992, including many of the the most prominent writers in the industry such as Warren Ellis, Nancy A. Collins, and Mark Millar. The only drawback to this star-studded line-up is the frequent new origins and changes in direction for the character, sometimes making it hard for new readers to understand the back story and frustrating the veteran fans who have followed her all of these years.

Dynamite Entertainment (the home to Vampirella for the last decade) couldn’t let her fiftieth anniversary go unnoticed (or unpublished) and have enlisted another veteran writer in the form of Christopher Priest (Black Panther, Quantum and Woody) to make sense of her recent publication history.  Priest is accompanied by Turkish comic artist and colorist Ergün Gündüz (adding the type of detailed artwork that every fan expects from a Vampirella comic book) and both creators are successful in creating a entry point for new readers and some satisfying continuity for current ones.

Readers are thrown into the deep end of the pool at the very start with a vivid plane crash scene.  The way that the panels zoom and zoom out of the carnage offers more than a bird’s eye view of the crash, allowing the reader to absorb every horrific aspect (and for a horror comic, it is a near perfect introduction).   From there, one passenger on the plane seems to be worse for wear, but still alive and kicking (even sans head, which is promptly put back into place naturally) and this begins “Seduction of the Innocent Book One: Yellow Brick”. 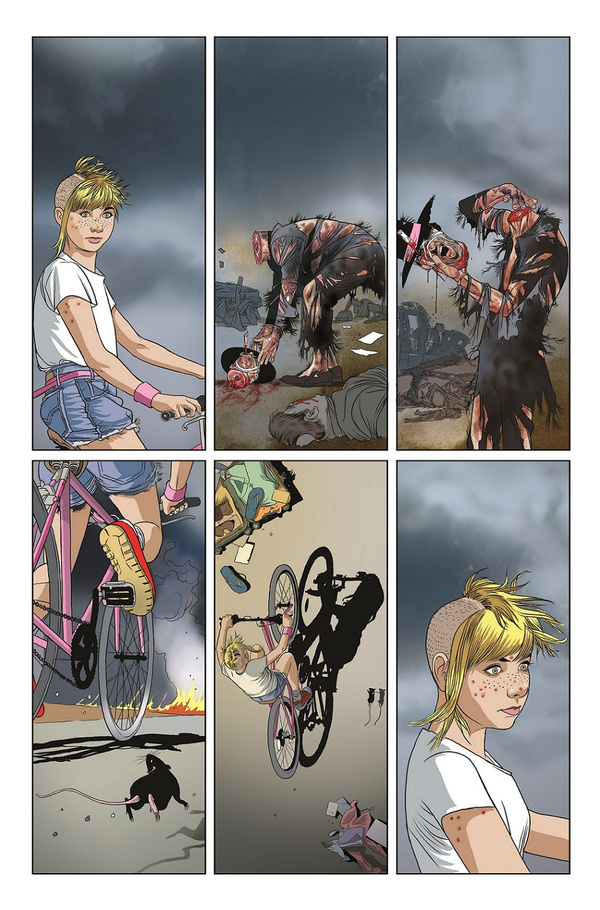 According to Priest (in an interview with Bleeding Cool),  his “… version of Vampirella is set in the real world…” and Priest’s motivation revolves around  what it would be like if an “…alien from another planet were stranded here? What if that alien looked like one of the Kardashians and wore barely any clothing at all? And had fangs, drank blood and sprouted bat wings? We’d assume she was a vampire. But she’s not a creature of occult origins. She’s a Martian who’s now stuck here with us idiots who stereotype her as this THING because she looks and functions a certain way. That would seem to be an allegory for how we treat each other; for racism, xenophobia, homophobia and religious persecution.”

Over his entire career, priest has been able to blend reality with fantasy, working subtle (and sometimes not so subtle) metaphors about the human condition into his stories, as well as commentary about the current era we are living in.  He is able to once again do this in the scripting in the first issue through the inclusion of a Board Certified Trauma Specialist (who bears more than a passing resemblance to actor Clarence Williams III) who works with the survivors of the crash, namely our title character.  Once Vampi is “on the couch”, the details of the plot are revealed, and the doctor’s skeptical nature shines through and he becomes a non-nonsense narrator for a highly unusual story (in his eyes).  Priest is well-known for his sense of humor, and it helps in a story which deals with elements that can be hard to juggle such as realistic catastrophes, headless demons, talking animals, and Vampirella’s signature costume.

Gündüz  art style strikes a key balance between the Warren magazine version of the 70s (and his work in European comics helps in the regard) and the 90s “bad girl” that brought the characters back to the forefront of the comic industry.  He is equally adept at the realistic settings, as well as the bloody battle between Vampirella and Von Kreist at 20,000 feet.  Shifting between a standard doctor’s office setting and a gravity-free bloodbath could challenge many artists, but Gündüz’s art doesn’t seem out-of-place in either locale.

Speaking of “The Many Origins of Vampirella” told over the years, the last page of issue one ends with a substantial cliff-hanger and the exact tag-line, letting readers know that Priest is aware of the sometimes convoluted history of the characters.  We’ll have to see how Priest and Gündüz handle them next issue, but the first issue of the new series is a promising jumping on point for readers.

Vampirella #1 is currently available at finer comic book stores everywhere and includes a number of variant covers by the likes of Frank Cho, Alex Ross (pictured below), Joe Jusko, Guillem March, and cosplayer Erica Fett.   Two limited edition variants include covers by Adam Hughes (recreating his own cover in a homage to 1992’s Vampirella #1) and classic Warren artist Sanjulian. 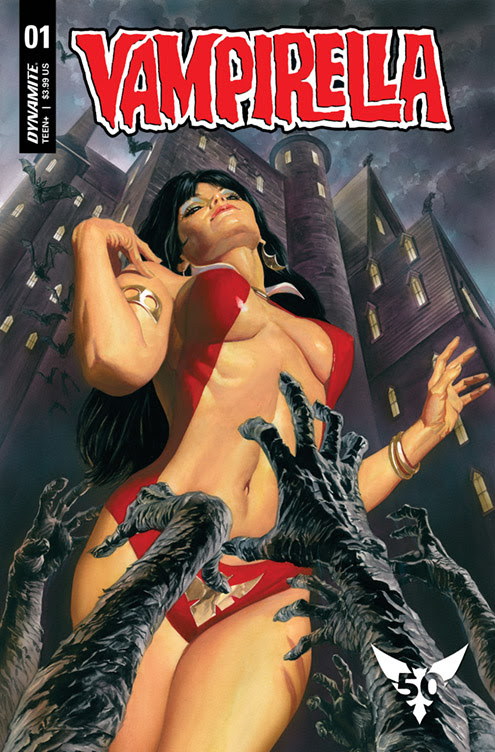 Staff Writer at Horror News Network
Nick joined the website in 2015. His lifelong love of comics and horror began with Universal Monsters and the Incredible Hulk. He has fond memories of going to Waldbaum’s supermarket with his mother and being rewarded with a 3-pack of sealed comics. It’s been all downhill from there… Since those early days, his life has been immersed in four color action and scares on the silver screen.
http://www.horrornewsnetwork.net/wp-content/uploads/2019/07/vampilogo.jpg 256 820 Nick Banks http://www.horrornewsnetwork.net/wp-content/uploads/2016/05/HNN-logo.jpg Nick Banks2019-07-17 14:03:072019-07-17 14:03:07'Vampirella (2019) #1': The Horror News Network Review
0 replies