The Walking Dead super-villain Negan may soon be lugging some new hardware that will make even Lucille jealous.  Jeffrey Dean Morgan, who portrays the charismatic skull-crusher on the hit AMC series, was nominated for “Best Guest Performer in a Drama Series” for the upcoming Critics’ Choice Awards.  After the nomination was announced, Morgan’s network employers tweeted out their support, complete with a baseball bat emoji.
Since first appearing in the final episode of season 6, Morgan’s character Negan has literally taken the undead world by storm.   Bashing brains and taking names (and Daryls), Morgan has portrayed the role with a brilliant sense of charm and cruelty, effectively blurring the lines between the television and comic versions of the Saviors’ leader.  The Broadcast Film Critics Association & the Broadcast Television Journalists Association obviously agree, as on November 14th they placed Morgan in the same company as Hollywood heavyweights Ellen Burstyn (House of Cards), Michael J. Fox (The Good Wife), and Jared Harris (The Crown).
The 22nd Annual Critics’ Choice Awards will air on A&E live on December 11 at 8PM ET (5 PM PT.)  Good luck to Mr. Morgan! 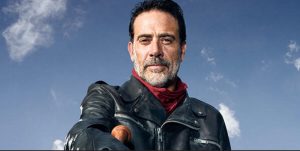