There was a point in my life where someone posing the question “truth or dare” would make my heart race and my palms sweaty, but apparently those days are over. On Tuesday, April 10th I attended an advance screening of Jeff Wadlow’s Truth or Dare. A movie (I thought) had a lot of promise behind it with its talented youthful cast and the powerful Blumhouse studios behind it.

The films cold open started with a bang. We meet an unknown character in a gas station who looks like she’s at the end of her rope and it only escalates from there. Unfortunately, this opening is also where the shock and surprise ends.

This film is filled with your familiar teen characters: The goody two shoes, the drunk, the one minority and the party boy. Seriously, these character aren’t even paper thin. One shining performance though does come from Lucy Hale as Olivia. What this girl was able to do with cliché dialogue and trying her hardest to make the audience feel like this world has stakes was beyond impressive; I really look forward to what she can do with a deeper and better thought out character.

Without spoiling this film, it is based around a group of college kids heading away on their very last spring break together. Of course they find themselves in Mexico which leads them to playing truth or dare with a stranger in an abandoned church. This is how every 21-22 year old spends their spring break, right? But, as you guessed it, the game does not end there…

We find ourselves back in the USA on a college campus when the mysterious game begins to haunt them and “make” them play. Let’s dig into those stakes I mentioned before. You never get the feeling that anything bad will actually happen to these characters.  The dares come off almost comical at times (they are not supposed to). 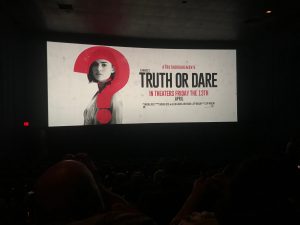 There is one dare though that got my hopes up for the film for a moment involving a hammer. Unfortunately, though, it slows back to expected tropes. Those who do die seem almost to deserve it, so why would I feel bad for these people? Now who is this demon, ghost, spirit… whatever it is that haunts them? Eh, you’ll kind of figure that out in the third act.  Seriously, there’s a good 7-8 minutes where you don’t really learn anything. I can’t help but feel like this movie was about an hour and 10 minutes and the producers said “uh oh, how do we add more into this?”

Speaking of producers, let’s talk about how many hands were on this film. There are 4 screenwriters credited and 8 producers and boy does it feel like it. At times it’s almost like someone yelled into a crowd of teenagers “hey, what’s a thing kids like?” and someone replied “snapchat”. Every piece of technology is dealt with so heavy handed in this. At one point someone actually uses the sentence, “my YouTube is for charity work. My Snapchat is just for fun”. Thank you for taking time to explain that to us. This movie is filled with descriptive scenes we do not need.

But, like always, let’s try and find some good in it. First and foremost, if I was 13 (after all it is a PG-13 movie) this might have had a little more effect on me. I guess maybe a 33 year old wasn’t their target market. Also, as I mentioned earlier, this movie has a very talented cast and we should be seeing them a lot more in the future.

Also, the gay character in this film is never played for laughs and actually kisses another man on screen, and not to the disgust of anyone on screen. It was refreshing to see a gay character just be a person not a trope. It wasn’t played for anything other than, this is who he was so kudos to this film for that.

What would have made me like it more? STAKES! I don’t always need blood and guts (though it helps) but this movie needed something to make me feel like these kids were actually unsafe. If you see this film, tell me the scene on the roof is scary; I dare you.

If I have to tell the truth about this film, I cannot recommend it. It felt like a wildly safe version of It Follows. I look forward to the cast growing up to deeper material and scripts though and still think Blumhouse has a ton of potential after their recent work with films like Get Out, The Belko Experiment and even the fun Happy Death Day.

So now it’s your choice:

Contributor at Horror News Network
Matt Wilson is a graphic designer who has loved horror and cult films from a young age. He currently does all of the design work and giveaways for Connecticut Cult Classics and helps out at CT Horror Fest. His favorite films are Phantasm, Monster Squad and Alien.
http://www.horrornewsnetwork.net/wp-content/uploads/2018/04/truth-or-dare-logo.jpeg 762 1600 Matt Wilson http://www.horrornewsnetwork.net/wp-content/uploads/2016/05/HNN-logo.jpg Matt Wilson2018-04-12 19:04:562018-04-12 19:07:45'Truth or Dare': The Horror News Network Review
0 replies