Coming off of its world premiere at the Brazilian genre festival Fantaspoa, writer and director Branden Croft unveils his latest thriller/horror hybrid called True Fiction. The third feature from Croft, True Fiction tells the story of twenty-something writer Avery (Sara Garcia), who lands her dream job as an assistant to her favorite horror author and inspiration Caleb Conrad (John Cassini). In the spirit of films like Misery, Audition, and even shadows of Saw, we see a terrifying character study of fear, obsession, isolation, and fandom, brought to disturbing life. Starring a stellar ensemble cast including actors Julian Black Antelope (Hold the Dark) and Julian Richings (Man of Steel, Supernatural, The Will and Testament of Rosalind Leigh), True Fiction is a well-rounded film with potential; but it falters once it moves from a psychological thriller to a full on horror film.

True Fiction has a solid narrative that has hooks to grab you as a viewer. I mean let’s look at it: a pretty, young woman and a mysterious, good-looking author, come together to co-write a book based on the author putting the woman through the disturbing trials of isolation, torture, and forming a dark connection inside a prison-like environment. It makes my mouth water and mind go wild at the possibilities as a genre fan! The obsession. The tension. The secrets. The reveal. It’s all there to make a film that is not necessarily fresh, but one that can have Croft’s fingerprint put on it.

Looking at Croft’s two previous features, it seems that this film is also a step forward for him. As I had mentioned above, Miike’s Audition (1999) seems to be a large influence on this film overall. His influences and fandom are evident throughout, as we see a reflection and influence of Asian genre cinema; it ranges from the visual palette to the tone to the unfolding of the stories and dark motives. The film has a good pace to it also; the beats are laid out and again cater to an Asian cinema style as each act reveals character details and uses misdirection, especially when it comes to Caleb.

The look of the location is a big factor for me in True Fiction; it reflects Caleb’s mindset through most of the film. The color palette, balance of light and shadow, and some long shots down hallways towards doors which are locked take us on a journey. The isolation is palpable throughout the film. The area around the home is presented as a tool of isolaton from the start. It builds tension and hopelessness. I think Croft, DP Ian Lister, and Production Designer Bobby Vanoen, all had similar tastes, ideas, and designs on making this house feel like that prison for not only Avery, but later Caleb as roles are reversed. Ex Machina (2014) also comes to mind. One of my favorite shots is the drone shot looking down on the car traveling through the woods, it tells so much in one shot about what is to happen.

Another aspect I loved was the sound design. The location is more than just a canvas for creating dread, it is a haunted house that plays into Avery’s growing paranoia. A knock there, a scream here, steps above, and more in a quiet house to go along with the performances was so effective. Speaking of the performances, both Garcia and Cassini are great! They give layered performances, that gives you enough as a viewer to keep you going for the ride. While I think the film needed a tighter edit to cut some fat off for the characters, both actors have chemistry. I also would have retooled Avery’s character a bit in the first act and not made her so trusting. Sara Garcia is able to manipulate the tools around her to invoke a credible range that goes from doubtful to passionate to terrified to vengeful.

It helped that Lister and his crew knew how to light her. Scenes such as in the strapped-down chair during the testing or sitting up in bed as things went bump in the night or investigating the office during each act, they use the light to capture detail. Cassini as Caleb does a great job as well, leaving just enough to make you question throughout but smart enough to be able to manipulate the situation.

I felt the editing of True Crime could have been better. I did not need to have Avery dancing in the house to prove she was in control and finally happy. I did not need such a shift to torture in the final act. I did not need as many testing sequences. The film could have been under 90 minutes at the very least. One thing which I will give the editor props for, is the assembly of the nightmare sequences which I felt were not only important but also well-constructed; this also connects into pace. While I am not particularly a fan of the edit for this film, it especially shows during the third act. A lot of things go off the rails, and not in a good way – aspects like role reversals, wasted dialogue between the characters, and overt violence. While I am a fan of brutal horror, including torture and physical violence, it has to be used for the right reasons or it becomes jarring to the point of a turn off.

For horror fans, there is something for everyone. For those who like gore and FX, the torture scenes are well shot and edited even if they don’t fit most of the film. There are a lot of bloody kills that paint this beautiful home, and the characters, with several nice coats. The film rides a wave of psychological horror throughout which includes some key conditioning videos. A major theme of True Crime is control: control of the story they are creating, control of Avery’s mind and control of their surroundings. It gets very tense at times when actors allow their characters to lose control and then fight to gain it back.

After watching it, I love the focus of author-centered horror which is not done as much as I would like. It has to be done right, and this film has elements that work and ones that don’t. I think the film overall is well put together, with a good story that reflects his muses. I think though, that there is an immature aspect to this film as we move through and perhaps a loss of focus in certain areas. Still, Croft, cast, crew, and producers definitely have a really good project here that needs to be seen and experienced. Find out more about True Fiction by clicking here. 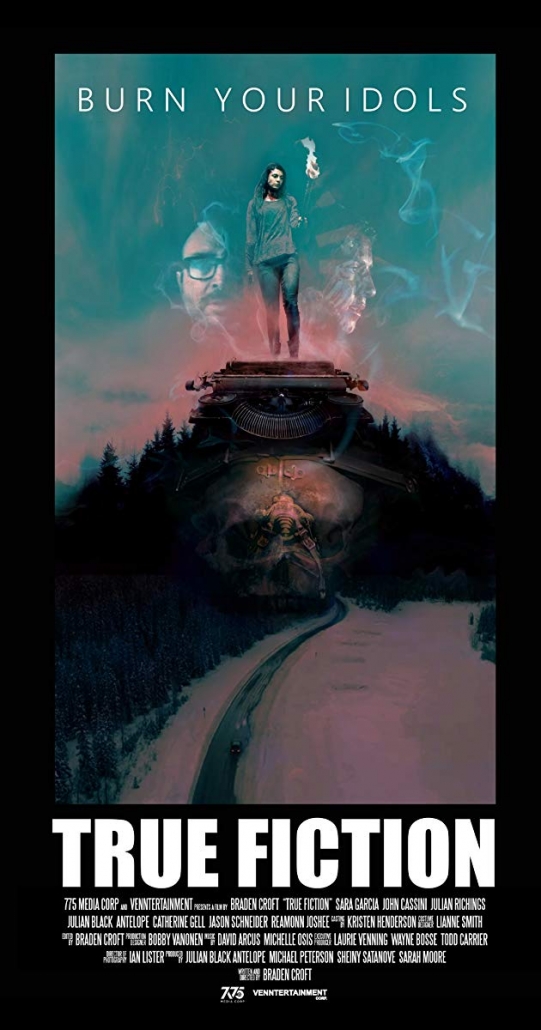