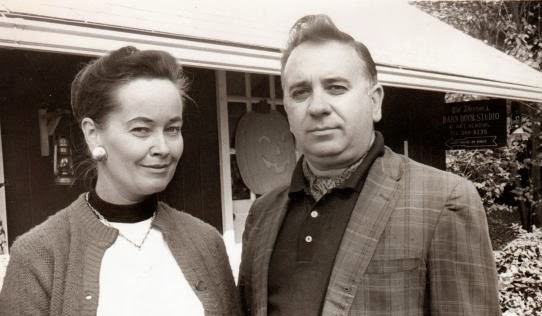 For real life ghost story aficionados-and since 2013, even big screen supernatural movie buffs- no individuals are more prominent than Ed and Lorraine Warren. The duo founded N.E.S.P.R., the New England Society for Psychic Research in 1952 and were involved in some of the most famous cases of hauntings of all time, including the infamous Amityville house, the Enfield poltergeist, and the Annabelle doll. They’ve been famously portrayed by Patrick Wilson and Vera Farmiga in a series of The Conjuring movies and spinoffs, which have only increased their presence worldwide over the past six years. Ed passed away on August 23rd, 2006, and Lorraine continued to help people around the world with the assistance of her son-in-law, Tony Spera. It is with heavy hearts that we report that an era has come to an end today, as Lorraine Warren has passed away at the age of 92.

Tony Spera and is wife Judy-Ed and Lorraine’s daughter- confirmed in a Facebook post that Lorraine, “died peacefully in her sleep at home last night.”

“It is with deep sadness that I must announce that Lorraine Warren has passed away.
She died peacefully in her sleep at home last night.
The family requests that you respect their privacy at this time.
Lorraine touched many lives and was loved by so many.
She was a remarkable, loving, compassionate and giving soul.
To quote Will Rogers, she never met a person she didn’t like.

She was an avid animal lover and contributed to many animal charities and rescues.

She was wonderful and giving to her entire family.

May God Bless her.”

Tales of Lorraine assisting others in major, high profile cases through her knowledge of paranormal activity and her gift of clairvoyance can be found in countless books, movies, and television shows. What some may not know, however, is that Lorraine was always willing to help anyone who reached out to her- no matter how small their issue may have seemed in comparison to her major cases- never asking anything in return. She was known to take personal phone calls and offer advice to anyone in need of supernatural support. She was a positive presence in the community of the small town in Connecticut where Ed and she lived and established their Occult Museum, and a friendly face at the local businesses and post office she frequented.

It’s safe to say that there will never be a paranormal investigator as friendly, empathetic, kind, and interesting as Lorraine Warren, and her and Ed’s work will be forever remembered by anyone with even a passing interest in the supernatural. We here at the Horror News Network staff offer our condolences to the Spera family and the N.E.S.P.R. community, and we echo the family’s request for privacy at this time. May Mrs. Warren rest in peace, and may her values live on through the remembrance of her life’s work and her impact on the people she helped.

Staff Writer at Horror News Network
John has loved movie monsters for as far back as he can remember. He's since collected up as many comics, statues, and autographed material related to movies and music that he can get his hands on. He is particularly interested in the critical and analytical discussion of the best stories the horror genre has to offer. One of his largest works on the topic is a study on the portrayals of people with disabilities in horror films.
http://www.horrornewsnetwork.net/wp-content/uploads/2019/04/ed-lorraine-warren.jpg 316 542 John Evans http://www.horrornewsnetwork.net/wp-content/uploads/2016/05/HNN-logo.jpg John Evans2019-04-19 09:55:112019-04-19 12:44:48Trailblazing Paranormal Investigator Lorraine Warren Dies at 92
0 replies