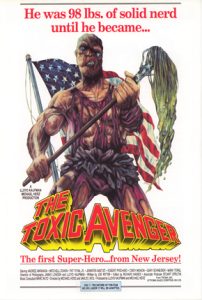 Little else is know about the reboot of the horror-comedy, which spawned the sequels The Toxic Avenger II, The Toxic Avenger III: The Last Temptation of Toxie and Citizen Toxie:  The Toxic Avenger IV.  Troma Entertainment founder Lloyd Kaufman will executive produce along with his co-director of the original film, Michael Herz.   Archer creators Mike Arnold and Chris Poole will be penning the script.  No release date has been confirmed.

Check back with Horror News Network as we report further updates on The Toxic Avenger remake.  What are your thoughts on this fan favorite getting the reboot treatment?

This season's The Last Drive-In with Joe Bob Briggs has been chock-full of special guests (along with all of the typical features that fans...
Read more

Super 7 just announced a radioactive opportunity for anyone who missed out on their first Toxic Crusaders Toxie deluxe action figure, and anyone who placed an...
Read more

Deadline is reporting that Legendary Entertainment has nabbed the film rights to The Toxic Avenger and will reboot the Troma horror franchise. The series...
Read more