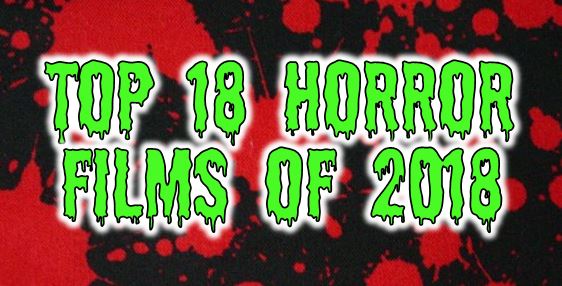 Wow…this years list took longer than previous years – so many movies, so little time! I started this list with close to 60 titles before narrowing it down to the 18 films below. While I know the title is “Top 18 Horror Films…”, keep in mind that these are just my favorites so I’m sure that you’ll disagree with some of my choices (cue the Birdbox hate) as well as some of my intentional omissions (Halloween, Hereditary, Suspiria). That said, there are still a bunch of films that were highly recommended to me that I have not yet had the chance to watch: Unsane, Witch in the Window, Marrowbone and The Clovehitch Killer being among them.

Oh yeah, the order of the below films is totally random.

Let me start by saying I don’t usually dig on Nicolas Cage and his particular brand of overacting but holy shit, what an insanely gory, wild ride this film is. Some say that it is too long and could have used heavier editing but I say nay, this movie is damn-near perfect. Cage is fittingly crazy, Linus Roache as cult-leader Jeremiah Sand is amazingly creepy and the score by the late Johann Johannsson is perfection.

The “rape-revenge” genre is not one that usually rates highly with me but once in a while, like last year’s Hounds of Love, one comes along that really blows me away and this year it was Coralie Fargeat’s Revenge. Aside from being a visually stunning piece of film, Matilda Anna Ingrid Lutz as our heroine Jen was my favorite female ass-kicker of the year until I saw Cold Hell – more on that below.

There’s always a lot of shade thrown at sort of “big-budget/wide-release” horror films and while I tend to agree that most of them are shit, there’s usually at least one or two a year that hit the marks that we look for as horror fans. While A Quiet Place was never very clever and it definitely had some plot holes, it more than made up for it in overall unnerving creepiness.

Kids need to learn that summoning demons is not cool. Nicole Munoz and Laurie Holden knock their characters out of the park but to steal from my March 31st review, “the film is so good is due to the work of writer/director Adam MacDonald (Backcountry). Mr. Macdonald takes what is really just a simple premise that could have easily been ruined with cheap jump-scares and tons of gore and he manages to hold back and build that tension that is the real backbone of a truly scary film.”

Nicolas Cage again?? You betcha! This time with Selma Blair. More “black comedy” than a horror film, what would happen if a rogue television signal caused all parents to suddenly want to kill their kids? Well, watch and find out! Plus Nick Cage going nuts while wearing a Misfits shirt? Bonus.

Terrified won “Best Horror Film” at Fantastic Fest. Well, no shit. Terrified lives up to it’s name and is easily the scariest film I’ve seen this year and possibly in several years. My one minor gripe is a bit too much CGI but in no way does it lessen the experience. Go ahead and watch this alone in a dark basement at night like I did.

The 80’s nostalgia thing has to be nearly over but thankfully Summer of 84 snuck in before the whole thing died. A fun story of a group of kids (in the 80’s..duh) who suspect that their cop neighbor is a serial killer so they decide to investigate.

If you thought that Magdalene laundries were sketchy before, just wait until you see The Devil’s Doorway. A rare “found-footage” film that I actually enjoyed, two Irish priests head to a Magadelene laundry in 1960’s Ireland to investigate reports of a miracle but find something much worse.

And in yet another episode of “kids need to stop screwing with demons”, we have this Spanish nightmare from Paco Plaza of REC fame. Really eerie throughout.

Awesome little gem out of Taiwan about a bullied teen joining up with his former bullies to torture a monster. Humans are the worst.

Yup, here it is! So much hate for this movie and I just don’t get why. While it definitely wasn’t perfect, it was enjoyable, well-done and had great performances by Bullock, Malkovich and the rest of the cast.

Such a majorly different film than Jeremy Saulnier’s last two works (Blue Ruin and Green Room) which makes sense as he didn’t write this like the previous two but directed a script from his buddy Macon Blair from the novel by William Giraldi. A very dark film with a great performance by Jeffrey Wright.

If you saw the name Gareth Evans and expected this to be a wild action film like The Raid & The Raid 2, you’re in for a surprise. Comparison’s to 1973’s The Wicker Man are rightfully being made but it’s a stand-out film.

Admittedly the zombie genre has become tired but there are still those that come along and stand out above the dozens of “same shit/different day” that are released every year. This one speaks to what might happen to the zombies if a cure was found and they were allowed to return to society; how would they be treated? Very engaging movie.

And just when I thought Revenge had the most awesome heroine of the year, I watched Cold Hell. Holy shit. Violetta Schurawlow plays Özge, a woman who becomes the target of a vicious serial killer…sucks to be him.

I love a good anthology film, especially one that really knows how to use the “wrap-around” as a major part to the story. A professional “ghost debunker” is given three stories to investigate that are supposed to change his cynical ways.

Another zombie film makes it onto the list mainly on the strength of the performance of Martin Freeman as Andy who is trying to survive the apocalypse in the Australian outback with his infant daughter in tow.

Nazi zombies? No, this isn’t Dead Snow, this is Overlord! Set in WWII, the Nazis have learned how to bring the dead back to life (Trioxin?) which really throws a wrench into conventional warfare. This movie is super-fun and one to watch immediately.

Well, there you have it! Go ahead and hate me for including Birdbox over Hereditary, I’m a big boy, I can take it! I will say that if I were forced to pick favorites, it’d be between Mon Mon Mon Monsters, Cold Hell and Terrified.

Hopefully you’ll find a few films on this list that you haven’t seen yet and will change your life…or at the very least entertain and scare you for a few hours.

January 1st, 2018 was such an exciting time for horror fans! Big projects were being announced, everyone was fired up about the upcoming Halloween movie,...

Although Halloween (2018) fell from the number one spot at the box office, the film did manage to cross the $150 million dollar mark...