Every day, I have the privilege to witness the creative growth, development, and maturity of filmmakers. Part of that is amassing a crew and collaborators you trust as well as don’t feel that they are there to bring you down or push their agenda on you. No matter what level of experience or project you are working on, all filmmakers are students throughout their creative lives. Surrounding yourself with those who share that vision or want to grow with you is so key. Sometimes though, there are projects tailored to a comfort level where ego, a select crew, or maturity play a role for better or not. Watching the packed house at The Landmark Theater in Jersey City, New Jersey, the anthology project known as the Theatre of Terror falls somewhere in the middle of growth and development as well as ego driven.

Let me disclose here at the beginning of this review, I am fan of Tom Ryan’s work and growth as a filmmaker. I have watched him develop as a filmmaker from the beginning with his zombie short Day 9. Focusing on more of character-based story rather than focusing totally on the undead antagonists, Ryan showed those who watched the short his talent and ability to create a well-rounded short narrative that had some humanity to it. A musician at the core, Ryan understands personality, performance, and artistic expression which has translated over for the most part into acting (Theta States), writing and directing several projects. Day 9 was followed up by his psychological trip entitled Faces. It was a nice twist on the psychosis of one man and the serial killer formula connecting. With Faces, the level of filmmaking rose but it was still a work in progress for Ryan as there was many lessons to learn from this film. Ryan spent the time no doubt watching, learning, and figuring out how to strengthen his filmmaking craft in different respects. Like his more recent short Rapt, as well as Day 9, Faces also did not get the larger theater audience that it should have for any number of reasons. It was quickly turned over into tangible media. I am hoped this would not happen with Ryan’s latest collection of short films wrapped into an anthology called Theatre of Terror. 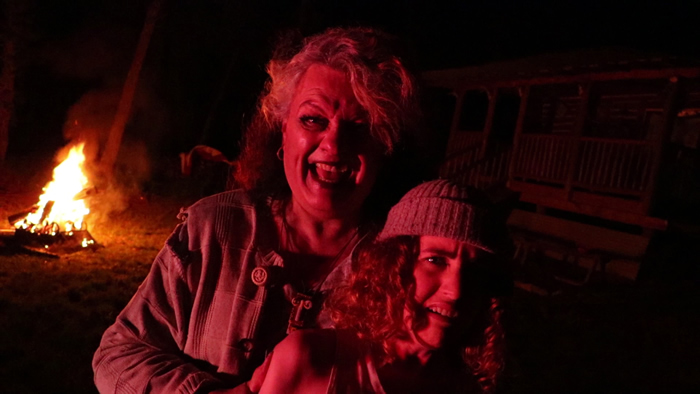 The Theatre of Terror focuses on a young woman named ‘Amber,’ who responds to a help wanted ad to save the Landmark Theatre. Played by the talented Lauren Renahan, Amber is drawn to the theatre where she meets the keeper of the theatre played by Ryan. Taking on double duties again both in front of the camera and as part of the wrap around/buffer segments plus writing, directing, producing, editing, and more, Ryan is a caretaker like figure that not only introduces each segment, but also offer cautionary advice for Amber as she sits in the empty theatre. Feeling guilty, Amber stays and checks out the beautiful restoration of the theatre. Here is where the tone becomes grim as we become voyeurs to a quartet of tales that tie into those who have visited the theatre before. The four segments entitled The Gift, The Bookworm, Abducted, and Endangered, each tell a tale connected to the insidious history of the theatre starting with The Gift.
The Gift tells the story of woman’s fall from grace named ‘Donna’ (Heather Brittain O’Scanlon). Once a happy woman, wife, and mother, the pressure of big business and deadlines opens the doorway to addiction and destructive behavior. Dealing with an accident one evening, she finds safety in an old shop and is met by ‘The Storekeeper’ played by Adam Ginsberg. As Donna, reveals her story, The Shopkeeper makes her an offer she cannot refuse to reunite with her family and find redemption. The second tale is called The Bookworm. This segment focuses on a wealthy, young man named ‘Mark’ (Scott Gorbach) who is obsessed with books and finds acceptance and an escape in them from the upper class world his family dwells in. As Mark, becomes more connected to his newly acquired library, he meets a mysterious woman named ‘Lara’ (Sarah Schoofs). Consumed by the books and Lara, Mark falls under the spell of the collection and its creatures who linger in the isles and its overseer played by Patrick Devaney.

The third tale Abducted focuses on a man named ‘Ned’ (Russell Hackett) who lives in the backwoods of New Jersey. Another tale of isolation, Ned and his dog are out hunting one day and come across an alien craft as well as a visitor from another world. As Ned hears the stories of people being abducted, he comes face to face with the alien. Finally, Endangered returns us into the woods where modern technology and Mother Nature clash. Looking to lay a pipeline through a forest where the endangered wolves would be affected, a local town, a trio of activists, a pair of hunters led by actor Christopher Murphy, and a backwaters family led by the mother figure ‘Mama’ (Alan Rowe Kelly) will come face to face with a beast and the horrifying legend during one dark night.
Each segment stands on its own as a short form film. Ryan write and directed every aspect of this anthology. Hats off to him. Each segment has a different feel, tone, focus, and dark corner of horror storytelling. All produced in New Jersey (as far as know), Ryan went out of his way to bring some very talented tri-state area cast, crew, and producers to work on this project which was split into two pairs of shorts. The Gift and The Bookworm in 2017 and Abducted as well as Endangered in 2018. Like any indie production you work with the budget, time, and resources that you have. Even with the challenges that faced this production, Ryan and company did some really good work.

The wraparound segment helps to bring this together for sure. One of the better wraparounds that I had a chance to see over the last year, the segment looks and sounds good. It sort of ties up what has happened in each of the four segments, but it feels a bit put together for the sake of making it an anthology instead of a just a series of short films. Either way, it serves its purpose. A question that I have, why did Ryan not find a bigger name to be the theatre keeper? His performance is works but with him taking on so much behind the camera, this was a chance for him to show growth and handle only the filmmaking duties instead of needing to be a large focus of the entire production which he has been with the majority of his previous entries. Why I am not a fan of Mickey Rourke’s role as ‘The Projectionist’ in Mick Garris’s horror anthology Nightmare Cinema, Garris was smart to grab a name to help market and sell the film. Theatre of Terror does not do this and in fact like his previous entries, has gone straight to DVD and Blu-Ray with no festival screenings except for the World Premiere. For whatever reason that was decided, it is a shame that more eyes did not see it. It deserved to be seen by more of a larger audience. 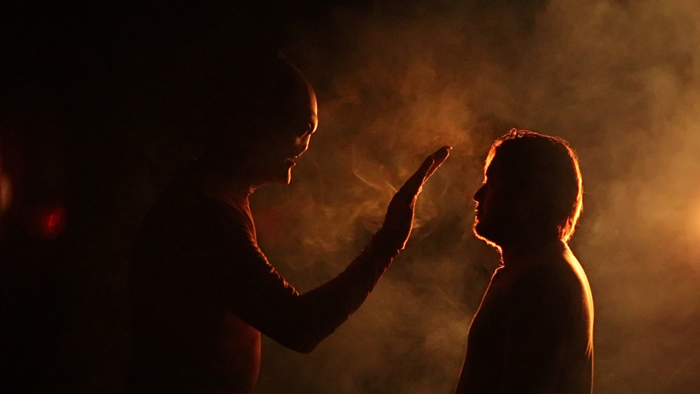 As for the segments, each one is an enjoyable genre piece. They balance each other out with different strengths and weaknesses. There was a total of three talented cinematographers for the four shorts including John Iwasz (The Gift), Mark Boutros (The Bookworm), and Louis Libitz (Abducted and Endangered). Each segment shows the selected DP’s choice in lighting, color palate, and framing which benefits the segment. The Gift has that grittier, 1970’s texture that turns into golden nostalgia as the story unfolds. The Bookworm has sophistication and narrow framing, almost tempting the viewer. While Abducted and Endangered has more of a found footage lighting and natural feel being outside in the wood’s primary.
Theatre of Terror’s sound and score fits each segment, however, nothing for me really stood out. One thing I will say, for an indie production where this may be over looked, the audio design and score came off sounding sharp for me at the screening and were effective on the screener. Speaking of design, kudos to Ryan for bringing on some very talented FX artists like Beatrice Sniper, Michael Anthony Scardillo, Nelson Vilela, and Patrick Boyer, who created some memorable practical FX, prosthetics, and costuming for the segments. All of these artists are tri-state area based. Some special praise to Scardillo and his FX makeup for capturing that unsettling body horror created with the makeup in The Bookworm segment. His FX work along with Boutros’s cinematography was effective.

The locations were standard in this anthology. With amazing production and set design, the one segment that stood out was The Gift. Ryan’s writing continues to be an asset in his film work. Each segment is a complete story that carries some emotional weight and important themes that develop within a variety of horrors that are both fantastic and yet feel real. Themes and storytelling devices of isolation, addiction, temptation, and karma stand out. Why I am not a fan of filmmakers editing their own work, Ryan edits most of this anthology. This is an area where it shows in some of the segments structure and pacing. The edit should have been shared or taken on by another set of eyes. Theatre of Terror has its share of twists that will surprise you. While the cast was entertaining and handled the material well, there were many strong performances in the different segments. Specific praise goes to Rowe Kelly, Ginsberg, O’Scanlon, Hackett, Abbott (for the comedy), and Renahan. Take the time to watch indie horror ans check out Theatre of Terror.