For those who love horror comics and war comics in equal parts, Christofer Emgard and Tomas Aira’s The Whispering Dark is a potent mixture of both genres, beguiling the senses with stark images of modern warfare, as well as a foreboding supernatural presence lurking just outside of the conflicts of men. Writer Christofer Emgard took some time away from his work on the series to discuss his impressive new series, as well as how to balance both horror and war elements to tell a story that satisfies fans of both genres.

Horror News Network: What are the origins of your new series, The Whispering Dark?

Christofer Emgard: The seeds of this series were first sown when I was in my late teens and dreamt of making movies. I had just read At the Mountains of Madness, and The Heart of Darkness, and felt an urge to somehow combine those two excellent tales conceptually. I went on to write an almost complete movie treatment – my very first treatment, actually – but could never quite resolve the ending, and the story fell by the wayside as I moved on to other things.

When the time came to pitch a story to Dark Horse, I got to think of that old treatment. After digging around on a barely functional hard-drive, I found an ancient file with most of the story still intact. Reading through it, I found many things to cringe at, but also quite a few that still captivated me, and I also knew with a surprising certainty how the whole thing had to end. I proceeded to rewrite the narrative as a comic book series synopsis and was pleasantly surprised when Dark Horse decided to publish it.

HNN: The reader is thrown into the “deep end of the pool” almost immediately in The Whispering Dark.  How does this establish the tone and pace of the story?

Emgard: The early story iterations actually had a longer lead-up where we got to follow the Ranger team for a bit before the pick-up and subsequent helicopter crash, but when adapting the story to a four-part series I had to trim as much fat as possible, and that intro didn’t really do much for the overall narrative. By starting with the crash I got to set the overall objective from the outset, and the reader should (hopefully) understand within a few pages what the stakes are.

HNN: The lead character Vance is an unlikely hero, and one who speaks little and is introspective throughout the mission.  How does this add an element to a “war story” that we don’t usually see?

Emgard: I’ve always had a strange fascination with war, from thinking “weapons and elite forces are cool” when I was a kid, to a more nuanced view and deeper understanding of the horrors of conflict as an adult. What captivates me the most these days is the mind of the combat soldier. How do people deal with the incomprehensible stress and fears of combat and killing, and what does it do to us as human beings? Hannah Vance is just one voice out of millions, and I imagine we would experience the story quite differently through Ozioma Watts’s head, for example. But through that internal narrative we get to explore the questions above in a deeper sense, and I find that comics lend themselves especially well to that kind of introspection through the possibility of juxtaposing imagery and narration.

HNN: Tomas has his hands full with some dynamic art in the series so far.  Were their specific points of reference for the art and the destruction and hopelessness that it conveys?

Emgard: The story was always set “Somewhere in the Caucasus”, and back when I first thought of it twenty years ago I was heavily influenced by the civil war in the former Yugoslavia, and the first Chechen War. All wars are terrible, but things tend to grow especially bleak when set during the winter and I wanted a truly oppressive mood to permeate the whole tale. Tomás instinctively grasped that and beyond a few pointers about time of day, and general references to the Caucasus, the excellent mood-setting is all his.

Authenticity is also an important ingredient to the story, and we’ve taken some care to accurately portray weapons and equipment that might be plausibly used in a war like the one in The Whispering Dark. Here again, Tomás has shown great attention to detail, and I believe his extensive experience from working with Garth Ennis’ War Stories has played a big part. 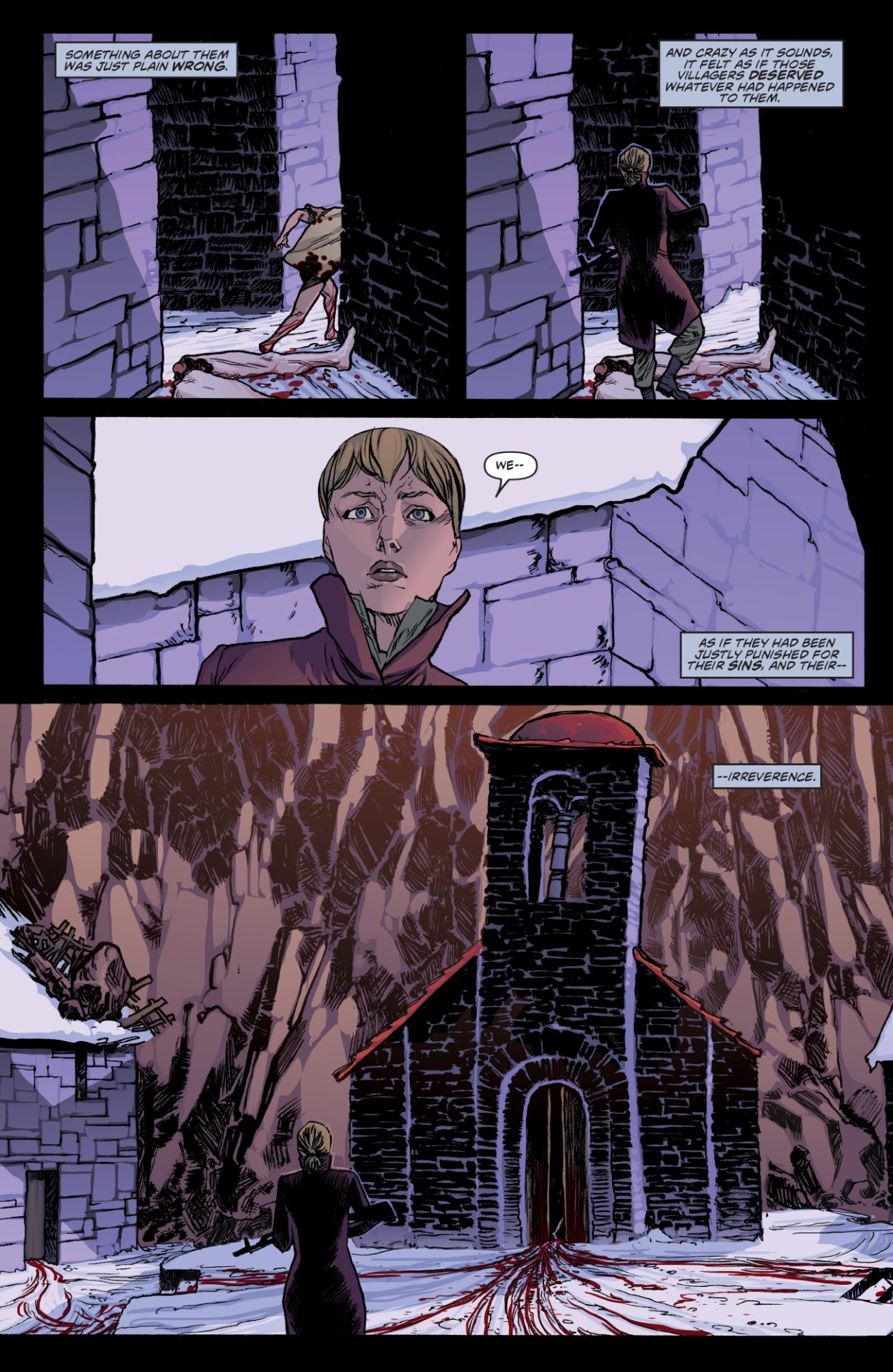 HNN: The storytelling has a real “Hemingway-esque” feel.  How does this sparse, clinical style add to the anxiety of the soldier’s situations?

Emgard: That’s immensely gratifying to hear, though it wasn’t a conscious decision to try to emulate his style. I do think that some stories benefit from being told with as little embellishment as possible. Some horrors are horrific enough in and of themselves and don’t need further elaboration. It might be that by keeping the tone curt and sparse we’re giving the reader little to lean against, and maybe that in turn helps convey how exposed the protagonists are.

Emgard: I’m a huge fan of subtle horror, and I’m captivated by stories about madness and insanity. One of the main inspirations for this series was the film Jacob’s Ladder, which has many great examples of barely glimpsed terrors. It’s been a tricky balancing act to do a similar thing with The Whispering Dark,  and I imagine there are readers out there who want more overt terrors than we’re currently providing. It’s been important to me to keep it this way, because as with Jacob’s Ladder I want readers to question what’s real and what’s not. Are Hannah’s visions and dreams connected to any sort of external reality, or is it all in her head – caused by go-pills, sleep deprivation and cognitive trauma?

It should be noted though, that I also like daemons and tentacles …

HNN: Any hints of what’s to come in the second half of this tale?

Emgard: Irina, the local girl the group brought with them, mentioned a “forbidden village”. Why forbidden? And it could be just me, but there seems to be something going on with the crucifix in Hannah’s visions …

HNN: Besides your current series, so either of you have any upcoming projects?

We’ve had great fun creating The Whispering Dark, and we aim to do more projects together in the future!

The first two issues of The Whispering Dark are currently available at finer comics shops everywhere and issue three will be released on January 2.

The wait for the latest game based on the hit AMC horror series The Walking Dead is almost over. The Walking Dead Onslaught from developer Survios will be released Sept. 29 for PlayStation...

A new horror flick set to debut on Hulu just in time for Halloween gives a whole new (and terrifying) meaning to the phrase...