Blog - Latest News
You are here: Home / Horror Movies and TV Shows / The Walking Dead Weekly Wrap up – “A” 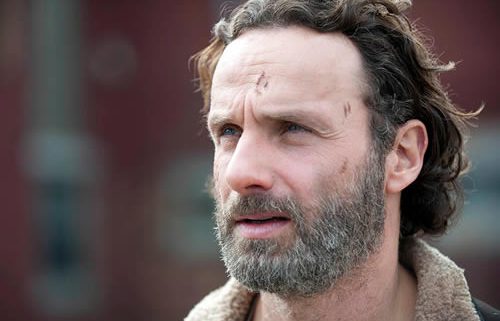 Thoughts: **SPOILERS** Wow!  Well the season finale wasted no time in getting right into the action.  I will give kudos the writers, as this was without a doubt the best episode of the second half of Season 4.  The only negative of the finale was the over abundance of commercials. At times it was really just relentless.

The show begins with an incredibly intense fight scene as Daryl’s new group meets up with Rick and holds a gun to his head.  All this while his men beat up Daryl and try to kill him and Carl.  If we think back, Rick Grimes was always the do-gooder.  Well old Joe pushed Rick to the most primitive and base of all fatherly instincts when Rick gave him one of the most gruesome human kills we have seen in Walking Dead history. Shocking? Yes.  Cheered on by fans everywhere? Yes.

This episode, cut in with flashbacks of the beloved Herschel giving Rick advice, shows Rick in a complete transformation. As the episode ends, we see what Terminus really is.  The majority of the group is reunited…and Rick’s new outlook is very clear. We’ll have to hang on tight until the Season 5 premiere in October to see if the folks at Terminus will regret fucking with this tight knit group who have transformed into a survive by any means necessary gang.

See you in the Fall!

Senior Editor at Horror News Network
Christine Bucci-Caprilozzi joined the Horror News Network staff in 2005 when the site was still ComicMonsters.com. She started as a Staff Journalist adding interviews, comic reviews and convention coverage. Christine is also the Lead Organizer/Director of the CT HorrorFest and is a firm believer in keeping the indie spirit of the horror community alive. You can follow her on Twitter @Christine_HNN.
http://www.horrornewsnetwork.net/wp-content/uploads/2014/03/TWD-A.jpg 343 500 Christine Caprilozzi http://www.horrornewsnetwork.net/wp-content/uploads/2016/05/HNN-logo.jpg Christine Caprilozzi2014-03-31 02:33:142014-03-31 02:33:14The Walking Dead Weekly Wrap up - "A"
0 replies