The Walking Dead Issue 193: The End of the Line?

In a bit of shocking news around the horror comic and pop culture world earlier today, it was announced by Bleeding Cool that issue #193 of The Walking Dead will be the last.  While readers and fans alike were preparing for this day, it is coming much sooner than anyone anticipated…..as in tomorrow, July 3rd.  The sudden announcement regarding the ridiculously-popular comic’s demise came with zero fanfare or warning.  In fact, future issues had already been announced and release dates selected for both August and September of this year.   Truly wild stuff.

Though no formal declaration was released, Bleeding Cool did confirm the rumor with Image Comics publisher Eric Stephenson (who issued a long statement heavily praising what The Walking Dead was able to accomplish in its 15-year run.)  And of course, writer and creator Robert Kirkman couldn’t help adding to the hysteria by claiming that Issue 193 would be monumental on his Twitter account on July 1st (see tweet below), before also confirming the end of an era.

I’m upset, too. I’m going to miss it as much as you will, if not more so. It breaks my heart that I had to end it.  And we have to move on….but I just love this world too much to stretch things out until it doesn’t live up to what I want it to be.  I hope you understand.

It’s hard to believe that the comic book that spawned the massively-successful AMC series of the same name (which continues to bring in decent ratings despite a recent viewer backlash) and eventually two spin-offs will be shutting its doors for good.  However, that appears to be the case here.  For real.  While the shows obviously use the comic story-line for inspiration, they have evolved in a similar-yet-different path bringing in completely new characters and killing others off in direct contrast with its source material.  So it remains to be seen what the show producers and AMC will do with the television aspect of the franchise going forward.

If this truly is the end of the line for Kirkman, artist Charlie Adlard and every other brilliant mind involved with one of the most successful and influential comic book series in history, then we as fans should applaud all that they’ve given to the horror and pop culture genre as they ride off into the sunset.  Of course, if this is some kind of last-minute swerve to gain attention, then we’re on board with that as well.  All we know is that everyone should go to their neighborhood comic shop tomorrow July 3rd, and purchase the 71-page, square-bound Issue #193 of The Walking Dead because it appears to be the end of an era.

And remember…the dead are never truly dead if we remember them forever. 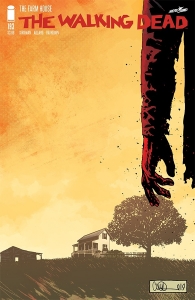 James Tynion IV and Martin Simmonds will team up for their first Image Comics ongoing series this September entitled The Department of Truth. According to...
Read more