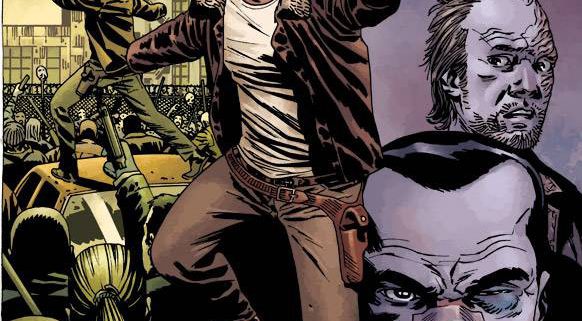 We’ve all been anxiously awaiting for the “historic” issue 115 of The Walking Dead.  Image Comics has been promoting it.  Roberk Kirkman has been tweeting about it with as much fervor as he did with issue 100.  So what’s all the hype about?  What’s everyone looking forward to?  At long last, we are promised the epic, further-apocalyptic showdown between Rick and Negan, Alexandria and The Saviors.  Would it all come to a head, finally?  Read on for the answer……but please, turn back if you’re a fanboy (or girl) and can’t handle a few spoilers.

While I’ve been praising Kirkman’s storytelling and character development for the better part of a year and a half, at some point we have to recognize the ridiculousness.  Issue 100 of The Walking Dead promised an epic confrontation, and it surely delivered.  We were even treated to the brutal slaying of a main character.  Issue 115 was promised to be a likewise classic, an edition for the ages.  Multiple variant covers were produced.  The big 10th anniversary of The Walking Dead celebration was tweeted and Facebook’d and touted with press releases.  So what are the loyal readers of TWD treated to?  I hate to say it…..but more of the same.

TWD Issue 115 opens on an eerily quiet early morning in the compound as the combined forces of Alexandria, the Hilltop and the Kingdom gather at the gates for their huge assault on Negan’s forces.  Fresh on the heels of a retreat by the Saviors, Rick gives a rallying speech to the makeshift troops that seems strikingly similar to The Governor’s rhetoric to his people before the assault on the prison in the TV show.  A case of art imitating…..art.  Or something like that.  Anyway,  the good-guy alliance travels to Negan’s compound, and words are exchanged.  Not blows, or bullets, but words.  This appears to be the theme of the comic shortly after the “Something To Fear” storyline, poor Glen excluded of course.  Do we reach a conclusion?  Hardly.  To be honest, I was confused as to why Negan is acting so nonchalant during the confrontation.  Didn’t he run away with his tail between his legs after being overwhelmed at the end of issue 114?  Sure doesn’t seem like the same guy.

Finally witnessing the combined force of the three victimized communities was pretty cool, but that’s not enough.  I can understand the need to slowly develop a big story arch, and we’ve been subjected to this for a while now.  I’ve continually given much-deserved credit to Kirkman for drawing us in and delivering in big spots when necessary.  However, issue 115 is a let-down.  The first three-quarters of the comic seems to be a set-up to something big.  But as you wait (and wait) for that one big punch in the gut, it never seems to come.  The ending leaves a lot up to the imagination, but with the hype surrounding this release it’s also rather anticlimactic.  Long story short……the saga continues with all of the major players intact.  And oh yeah, they’re still living in a post-apocalyptic zombie wasteland.  There’s not much here that would lead you to remember this small detail.

Perhaps, through his own genius, Kirkman has set himself up to…..well, not “fail”.  Maybe “disappoint”?  We’ve come to expect so much from the minds and artists behind The Walking Dead, and a lot of the recent criticism may be unfair.  I will admit the strange, adversarial and interesting relationship between dueling leaders Rick and Negan continues to impress me.  After all, what will it take for Negan to lose any amount of respect for the man that has attempted to ambush him about a half dozen times?  It’s clear that these two need each other, which could signal that there might be no end in sight to this war.  Issue 115 may not be “All Out War”, but it certainly furthers the conflict.  When the big payoff will come, that would be anybody’s guess.