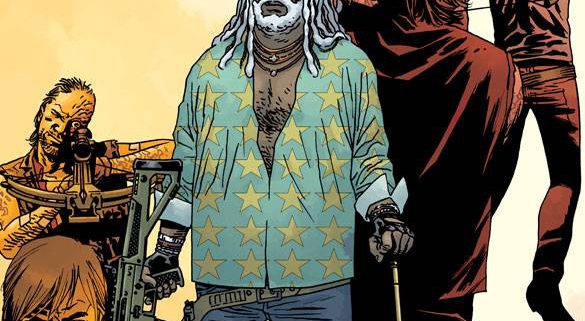 Robert Kirkman has insinuated, on the eve of the “All Out War” storyline launch over a year ago, that the landscape of the TWD universe will drastically change by issue 127.  It remains to be seen to what extent, but at this point Mr. Kirkman continues to be a man of his word.  In issue 123 of The Walking Dead, yet another in a growing list of battles between Rick’s allies and Negan’s Saviors takes place, this time at the Hilltop.  But something about this battle seems different, seems….final.  If we hadn’t already been told that this is chapter 9 (of 12) in All Out War, I would swear that this issue would be the penultimate in the latest saga.  Kirkman brilliantly offers an abundance of hope in the beginning, followed immediately by a crushing blow of despair.  It would be an honor to continually witness a master at work, if there wasn’t so much frustration along the way as well.

Issue 123 begins as the newly-robust Hilltop community (swamped by the addition of the Alexandria and Kingdom survivors) is finalizing an attack plan and actually offering small glimmers of hope for each other.  Meanwhile, homicidal mastermind Negan (who is really growing on me as the baddest man on the undead apocalyptic planet…..sorry, Governor) is one step ahead, waiting outside their walls with his endless supply of Savior soldiers.  The Saviors bring the war to the Hilltop, much like they did to the ASF, and the results are again bloody.  This isn’t the climactic battle to end the war, at least not just yet, but it does move one side into a near checkmate position.  Negan’s deliciously evil master plan of infecting their weapons with zombie guts to turn the good guys into zombies quickly, which was hatched in issue 122, begins bearing early fruit.  It’s about time the humans turned the roving undead into their own form of biological weaponry, I say.  Of course, the television show briefly touched upon this when the Governor dropped a “zombie-bomb” in the middle of the prison lawn.

The major development in this issue has to do with certain characters doing an about-face, and flipping their ever-evolving personas completely around.  Ezekiel seems to be coming around, as he’s determined to not let what happened before, the slaughter of his men under his control, occur again.  He’s an able-bodied soldier for Rick, and answers the call admirably.  Others in Rick’s clan take a back seat here, particularly Jesus, Michonne and Maggie (although she and Andrea do share a real moment on the eve of the sneak attack).  Carl continues his head-first assault into early adulthood, not seeming to relate to kids his age anymore.  And despite stating his allegiance to Rick’s group and hatred of Negan’s leadership, Dwight’s final act which sets up next issue’s cliffhanger will leave you scratching your head in bewilderment.  As usual, Kirkman does a great job of setting up the next installment, which luckily we only need to wait a mere two weeks for (this accelerated issue schedule kicks ass!).

Charlie Adlard and Cliff Rathburn are superb in this issue with presenting  the overwhelming despair and hopelessness that issue 123 is filled with.  Several instances of surprise and anger are captured beautifully by the duo.  Like I said, Kirkman is a master at his craft.  And the master will find a way to keep this engaging storyline going for another three issues…..but what happens after that, as he’s hinted, could be a completely different TWD universe than we’ve been used to for the last ten years.  And I, for one, can’t wait.