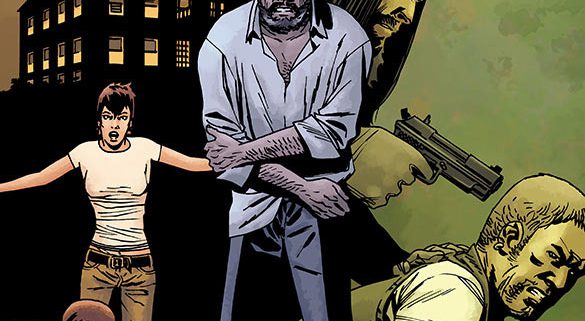 Looks can be deceiving….as Rick and his army are beginning to find out.  Issue 118 of Image Comics’ seminal The Walking Dead busts through the seemingly invincible shroud of the good guys’ victory over Negan and the Saviors, and marches the readers head-on into the reality of All Out War.  Just in case you thought this would be a quick and easy war, Kirkman and Co. are letting you know that it’ll be best to settle in for the long haul.

Issue 118 begins by showing us Rick’s group, the combined forces of Alexandria, the Hilltop and the Kingdom, as they begin their assault on the Saviors’ outposts.   With varying degrees of success, they engage in firefights with Negan’s soldiers, battling both bad guys and zombies alike.  The group becomes more and more spread out and isolated, as they flee bullets and biters.  The psychological toll becomes apparent from even the most loyal follower, and we’re treated to quite a few deaths (some of them significant) and the undeniable sentiment that this war is not going as well as everyone hoped.  While Negan is merely mentioned and never shown in this issue, you can’t help but feel that the tide of the battle is beginning to turn feverishly.  Both sides are cut off and scrambling, and having to act on the fly.

Perhaps we were all being lulled into a false sense of security due to the recent victories in issues 116 and 117, but Robert Kirkman felt it was appropriate to yank us all back down to earth.  His greatest triumph in issue 118 is the emotional impact that several key casualties bring to a few formerly rock-hard characters.  We see one couple, two folks that we’ve grown to admire since Alexandria became the setting, get torn apart in the most tragic way possible.  And we finally see a softer, much more vulnerable side to the eccentric and charismatic Ezekial. He’s been journeying down the path to a less-harsh exterior since getting close to Michonne, and he now has the opportunity to bare his soul about leading his men into the fray and being less than successful.  He no longer appears to be a leader of men, nor does he seem to aspire to that anymore.  And while Gregory is attempting to convince the Hilltop that Negan isn’t a bad guy, Maggie is there, conveniently, to preach about the virtues of not abandoning Rick.  “I believe in Rick Grimes” is a mantra that has pervaded The Walking Dead throughout the entirety of its decade-long run, and those words take on a much deeper significance in this issue.

Above all else, issue 118 is designed to clutch you by the throat and pull you down from the victorious high of the other recent installments.  You’ll witness the rise of some beginning to ascend to leadership roles, and the decline of others that are realizing that being a leader requires certain skills that they may not actually possess.  Through it all, you will be left with a foreboding sense that this war is about to come home to Alexandria’s doorstep.