KNOXVILLE, TN (September 7, 2018) – The Knoxville Horror Film Fest (KHFF) is celebrating ten years of fears on October 18 – 21, 2018 at Central Cinema and Regal Cinemas Downtown West 8. Dedicated to bringing the genre film festival experience to East Tennessee, KHFF 2018 will once again pack the weekend with independent, classic and short-form horror films, along with themed parties, trivia contests and a live podcast from Shock Waves!

This year’s lineup is headlined by our biggest feature film lineup ever, from 4k restorations of cult favorites like Maniac and Zombie to exclusive sneak peeks at anticipated indie horror releases like Christmastime musical Anna & The Apocalypse, punk-hunting thriller The Ranger and a documentary about Alvin Schwartz’s famed Scary Stories book series. (A rundown of features already announced is attached.)

A limited quantity of full Festival Passes are available now via the KHFF, Central Cinema and FilmFreeway websites. The $100 standard Festival Pass ensures access to all four days of KHFF events at both venues, while the deluxe $200 R.I.P. Pass adds a KHFF shirt, poster and free access to designated Central Cinema horror film screenings throughout the month of October, including a slew of double features like The Thing & The Thing from Another World, Re-Animator & Bride Of Re-Animator, Basket Case & Brain Damage, and a retrospective of classic Universal monsters! (Less limited passes to Friday & Saturday’s events at Downtown West 8 will be available in late September.)

ABOUT THE KNOXVILLE HORROR FILM FEST: Founded in 2009 by genre enthusiasts William Mahaffey and Nick Huinker, Knoxville Horror Film Fest has grown from a single night program at Knoxville’s Pilot Light to a multi-venue, weekend-long event. Over the course of nine festivals and countless standalone events, KHFF has presented hundreds of short films by up and coming filmmakers and strived to bring the best in current and classic horror cinema to fans who value the theatrical experience. In the summer of 2018 they expanded this mission to a broader audience with the opening of “neighborhood moviehouse” Central Cinema at 1205 N Central St. Also this year, filmmaker Jill Gevargizian (The Stylist) and film critic Elric Kane (Shock Waves) officially joined the festival’s board. For more information, visit knoxvillehorrorfest.com or centralcinemaknox.com.

For now, the schedule for the weekend is as follows:

Additional film programming and daily schedule for the 2018 Knoxville Horror Film Fest will be announced in the weeks to come, including the complete short film lineup, additional feature presentations and other screen surprises. Knoxville natives can get in on the fun for the entire month of October as KHFF is presenting a long list of horror classics that will be open to RIP (VIP) passholders. 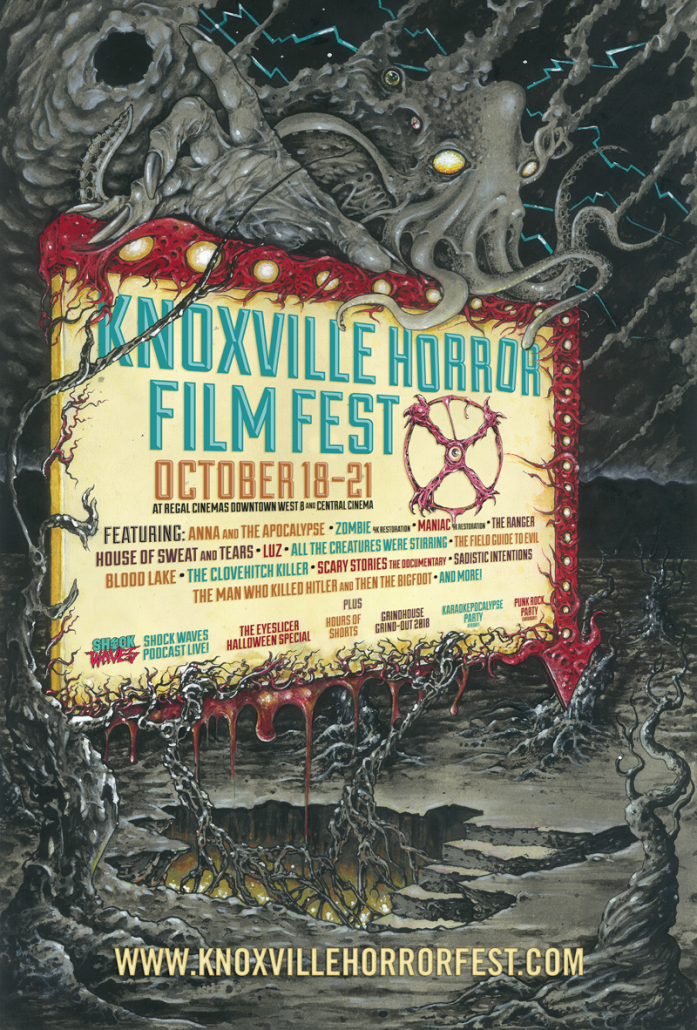