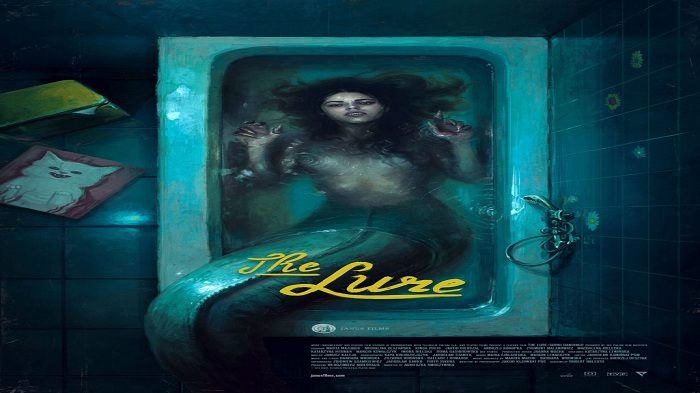 Written by Robert Bolesto and directed by Agnieszka Smoczynska, The Lure, or Córki Dancingu if you speak Polish, was first released in Poland in 2015 and then played at Sundance in 2016 winning the Special Jury Award for Unique Vision and Design. It was just released in the U.S. this year and I’ve heard some rumblings so I figured I should check it out.

Not really knowing to expect, I hit play and very quickly realized that there’d be no way to be ready for what I was about to watch anyway. The film starts out “normally” enough with two girls peering out of the water at a trio of musicians jamming together on the beach. The mermaids then use their song to try and lure the two men of the group into the water to help them but the woman screams and we cut away.

Next we are inside of an adult-themed nightclub with a creepy old owner who is making the rounds from the guest area, to the kitchen and finally to the back room. In the back room he finds the two mermaids from the lake but with legs. The trio of musicians are in there and the leader shows the owner what happens when he gets the girls legs wet.

From there, they all logically decide that the fish-girls (named Silver and Golden) should join the band. The girls are quite a hit with the club-goers as they both have lovely voices and like to be naked when they sing. All is well until Silver starts to fall for the younger boy in the band who looks remarkably like Evan Peters. Golden is not really feeling this as she’s just there for the food (aka human flesh) and thinks they should head back to the sea and swim to America; plus, there’s bad rumors about what can happen to mermaids who fall in love with a human.

Are you confused by this review? I’d be surprised if you weren’t because I am. More surprising is that I actually think I enjoyed it. I say “think” because it was so fucking bizarre that I’m not sure if I liked it or if I was sort of brainwashed by it’s sheer craziness. Everything from the crazy 80’s vibe to the disco-ish music to the characters that bounced in and out of the story without explanation just sort of worked for me.

Give it a watch and let me know if it works for you too…let’s be crazy together.