Blog - Latest News
You are here: Home / Horror Movies and TV Shows / ‘The Evil Down the Street’ Writer/Producer Craig Ahrens: The...

Last Wednesday, May 1st, Amazon Prime released the demonic possession thriller The Evil Down the Street to all of their subscribers.  The debut on the streaming service represents a major milestone for the independent film, a project from production studio CRA Entertainment and distributed by Indie Rights.  On the heels of several recent possession movies in the horror genre, such as the brilliant Hereditary and the wonderful Argentinian film Terrified, this movie proves to be a worthy entrant with some nifty performances and a creepy vibe that will leave you feeling both uneasy and entertained.

HNN was able to talk with co-writer and actor Craig Ahrens regarding the overall process in making TEDTS and what it was like working with this interesting cast, among other topics, in this exclusive interview.

Horror News Network:  Congratulations on receiving distribution for The Evil Down the Street through Amazon Prime. I know it capped off a long journey where everyone involved in the process  worked hard to get it out there to the masses.

Craig Ahrens: So true. My business partner, David Espinosa, and I felt very fortunate that we had nine distribution offers to mull over. We felt Indie Rights made for the best overall fit.

Horror News Network:  How did this project come together initially?

Craig Ahrens: I’ve known the family who’s story inspired this film for a long time. So it was always in the back of my mind. What I always liked about it was that it wasn’t over the top. If we did it over the top we would’ve been disingenuous. David and I started collaborating and, The Evil Down the Street was the result of that collaboration.

Horror News Network:  Were you always on board?

Craig Ahrens:  Oh yes, I was involved from the beginning.

Horror News Network:  You’ve shot numerous shorts over the last few years.  Talk about the transition from short films to feature-length productions.  Is it a difficult process?

Craig Ahrens: In my book there’s no comparing the two. Shooting a short film is a sprint. A feature, a marathon. You have to do so much more preparation in pre-production on a feature. Pre-production is everything for our Company. David gets a ton of credit in this area. He spends countless hours going over the shot list, studying all the scenes so once on set we can keep moving at a good pace. This was quite evident with the feature we just wrapped, “The Crumbs”. We shot it in 13 days. David and the crew were a well oiled machine. The actors were terrific too. Everyone came well prepared.

Horror News Network:  Demonic possession is a well-traveled road in the horror genre, but this film still finds a way to make it fresh. What are some of your favorite horror movies?

Craig Ahrens:  Two stand out. The Exorcist because we had never seen anything like it previously. I recall watching it in the theater when it first came out and it scared the hell out of all of us. Regan’s spinning heard, yikes! My other favorite is Paranormal Activity. I marvel how Oren Peli made that film for less than $15,000. He’s been a big source of our Company’s inspiration.

Horror News Network:  While the majority of the film takes place within the cursed house, there are a lot of really cool shots (such as the tracking shot through the neighborhood in the beginning) as well as the clever use of night/day settings in establishing the tone. Were these all the work of director David J. Espinosa?

Craig Ahrens: I’d say a combination of both David and Dan Watt, our Gaffer. The two collaborate so well together. Dan did such a wonderful job creating the mood that David was looking to achieve. I would always kid Dan. I’d tell him, “you don’t light a scene. You paint a scene.” Dan is one talented guy.

Horror News Network:  The Ouija Board plays a big role in this film. Any concerns about possible bad karma having that around set all the time?

Craig Ahrens: Oh my goodness yes. Plus just given our overall subject matter. When you’re shooting a film with this sort of a subject. You really need to be mindful especially given our film was inspired by true events.

Horror News Network:  Talk about working with Kelton Jones, Alena Gerard, Tara Milante and the rest of this fine cast.

Craig Ahrens: Incredible, incredible, incredible. They all did such a wonderful job. They actors came to set everyday ready to get to business. This was one of those few times in life that things went the way I had seen them my mind. I have to give David credit here too. He worked tirelessly with all of our talented actors to get them emotionally where they needed to be.

Horror News Network:  Gerard in particular turns in an exceptional performance as the tormented matriarch, Katie Ryan. How has the reaction been thus far to her eye-opening role?

Craig Ahrens: Phenomenal and rightfully so. A funny thing being on set with her. I would avoid looking at her. It creeped me out too much. Her character was very challenging to play. So many actors overplay being possessed. But Alena nailed it. She and David worked hard together in creating her emotional connection and it came out in her performance.

Horror News Network:  Anything exciting coming up, either for this film or any other projects in the pipeline?

Craig Ahrens: We just wrapped shooting shooting “The Crumbs” in Northern California. We expect for it to come out the first of next year. We are very pleased of course how The Evil Down the Street has been received. We have a screening for TEDTS on May 25th at the TCL Chinese Theatre in Hollywood.

The Evil Down the Street is available now to stream on Amazon Prime. 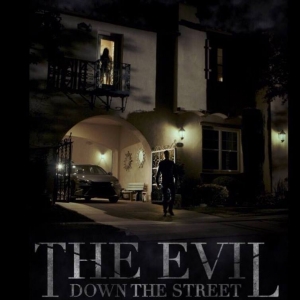 A ‘Hellraiser’ Reboot is Coming…
Scroll to top