If you grew up in the 90s, you couldn’t make it through your childhood without having at least one encounter with one of the many products of McFarlane Toys. Whether it be their Ultra Action Figures of popular Spawn characters, their variety of Kiss and other music lines, or their movie and professional sports lines, there was a McFarlane toy out there for everyone. If you were a big Spawn fan, though, you lived and breathed McFarlane Toys. During those years, barely a month would go by without a new comic book release or a new line of figures hitting the shelves to get everybody talking, and “mint in box” was the name of the game. Some Spawn fans have moved on from collecting since those golden years, but Todd McFarlane Productions is still as relevant as ever given the recent milestone release of Spawn #301 and the anticipation of an upcoming Blumhouse major motion picture directed by McFarlane himself and starring Jamie Foxx as Al Simmons.

Paul Burke of Asylum Publications worked with Todd McFarlane from the inception of his toy line. The two met when Burke worked for Stabur/Calibur Comics, and they first collaborated together on the production of the Stan Lee Presents the Comic Book Greats VHS line. Burke was there when the early ideas of creating action figures and starting a toy company began floating around the office of Todd McFarlane Productions in 1994, and he saw the endeavor grow into a licensing and manufacturing behemoth by 2000. The Early Days of McFarlane Toys painstakingly documents this incredible era for action figures, and it features a wealth of photos and information from Burke and his colleagues, Bill Martin, Anthony Billotto, Rick Privman, and Stephen T. Gouge. 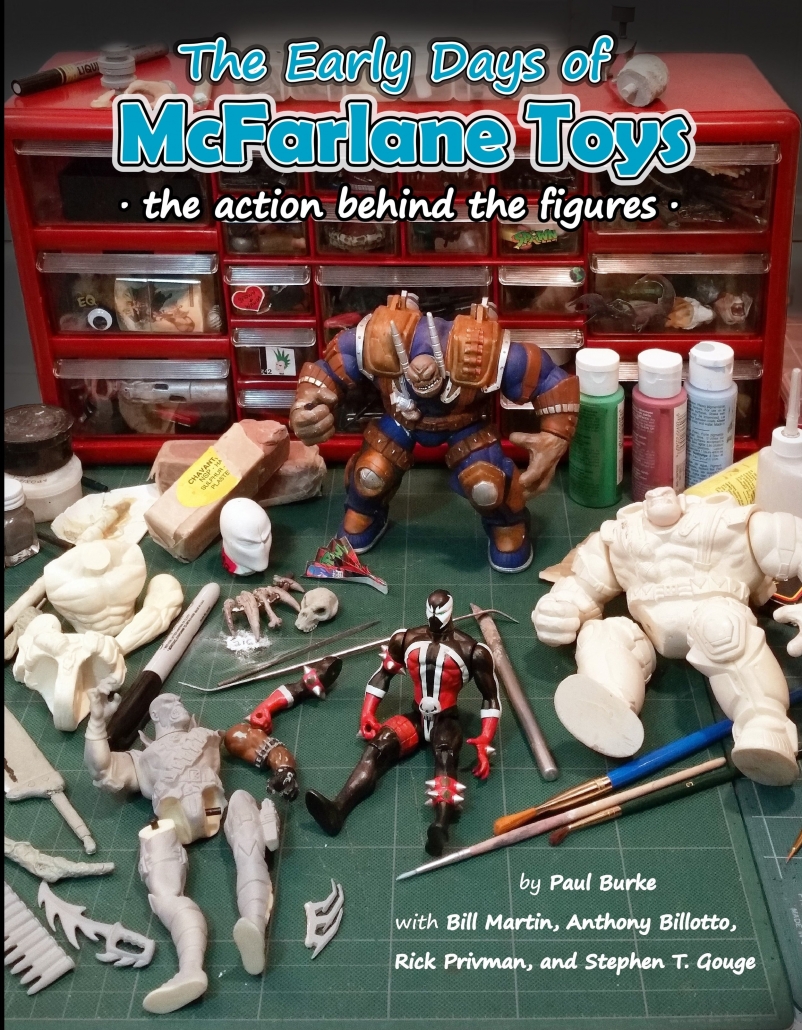 Burke’s text is chock full of fascinating anecdotes about the inception of McFarlane Toys. Even fans who followed the company and their products daily will learn new facts about how everything came together. It turns out that the demand over the promotional Hot Wheels Spawnmobile is what first inspired the idea to create Spawn action figures, and McFarlane nearly landed a lucrative deal with Mattel to produce licensed figures of his characters. Unfortunately, Mattel’s line of toys from Last Action Hero movie bombed hard, and that made them think twice about creating Spawn figures for some reason. Mattel changed the terms of the agreement into a much less appealing deal. This caused McFarlane and his collaborators to decide to start their own toy company instead. Burke says, “They decided that if they were dumb enough to start a comic book company and take on a hundred million dollar company like Marvel or DC, why not be really stupid and start a toy company and take on a billion dollar company like Mattel or Hasbro?”

As Series 1 of the Spawn line hit the toy shelves, the company quickly realized that fans were collecting the figures like how they collected the comic books. Just like buying a copy of a comic to read and a copy to keep in mint condition, fans were buying toys to open and toys to keep in the box. And just like comics with variant covers, toys featuring repaints and variant designs whipped collectors into a frenzy! A new business plan was born in response to these buying habits. However, it turned out that the licensing issue wasn’t the last time Mattel would interfere with Spawn‘s world domination. They issued a cease and desist warning over the “Todd Toys” company name, citing their trademark Todd Barbie/McDonalds Happy Meal character. Frankly, it was a blessing in disguise, because the company settled on the name that would become iconic: McFarlane Toys.

Through never before seen pictures and killer anecdotes, Burke describes how McFarlane Toys transformed the industry with Toy Fair Displays featuring unprecedented levels of immersion and detail and action figures that always put the fans first. Burke says that when McFarlane was informed that the company wouldn’t earn a dime on the oversized Malebolgia figure, he insisted that they move forward with the huge casting so it would be to scale with the rest of the smaller Spawn figures for the fans. This spirit of generosity was a core value of many members of the staff, as Burke recounts a time during the 1996 Motor City Con when the company was selling special Malebolgia figures for $60. A kid came up to the booth and purchased a figure from Burke, and as soon as it was in his hands the kid tore it out of the packaging and began playing with it on the convention floor. When Burke saw that, he immediately handed the kid his money back! The book does a great job of letting the reader know what it was like being a part of these events as they unfolded. 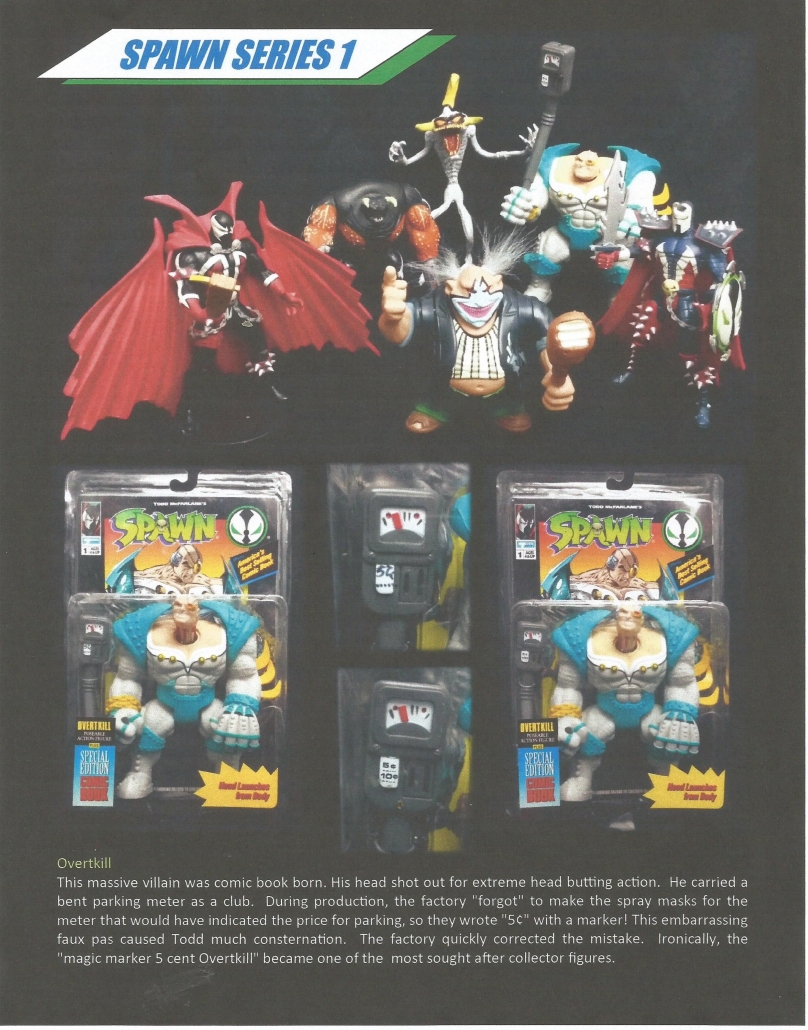 The book documents every licensing deal and tie in the company entered and produced as it became more and more popular and culturally relevant, including Pogs, video games, movie soundtrack variants, VHS releases of the HBO animated series, album covers for Korn, Disturbed, and Iced Earth, and a variety of original new toy lines. Burke describes a personal highlight of meeting Kiss backstage before a concert for them to approve the likenesses of their new action figures.

While flipping through the pages of The Early Days of McFarlane Toys, a fan can’t help but feel nostalgic about the McFarlane Toys Collector’s Club special variants and the gold card reserved for top members of the club. Burke makes the journey into memory even more interesting by peppering these images with rarely-known facts, like how the McFarlane’s Monsters and Total Chaos lines featured characters with head sculpts based on employees of Todd McFarlane Productions. Burke also reveals that the company had a great sense of humor since the beginning, creating parody toys and in-house variants for fun and excitement around the office. One of the earliest toy designs was for a “Cow Violator” from a ridiculous Spawn Barnyard Series. They even produced an Elvis Presley 1977 Farewell Tour Version, “complete with sequined jumpsuit, bathrobe, fuzzy slipper, donut, and ‘the King’s Throne’ toilet.” It was never meant to leave the office, but Burke provides photographic proof of its existence (and many other gag designs) in the book.

As the company moved into 1997 and beyond, McFarlane Toys tapped into the popularity of their properties overseas beginning with the Japan Toy Fair of 1997. A Manga Spawn line of toys soon followed, and the company collaborated with Medicom on Japanese classics such as Spawn Kubricks, Be@rbricks, and Real Action Heroes figures. Soon, an Asia Office was opened in 1998 and a Hong Kong Office followed in 2000. As always, Burke highlights these milestones with fascinating pictures and interesting anecdotes throughout. 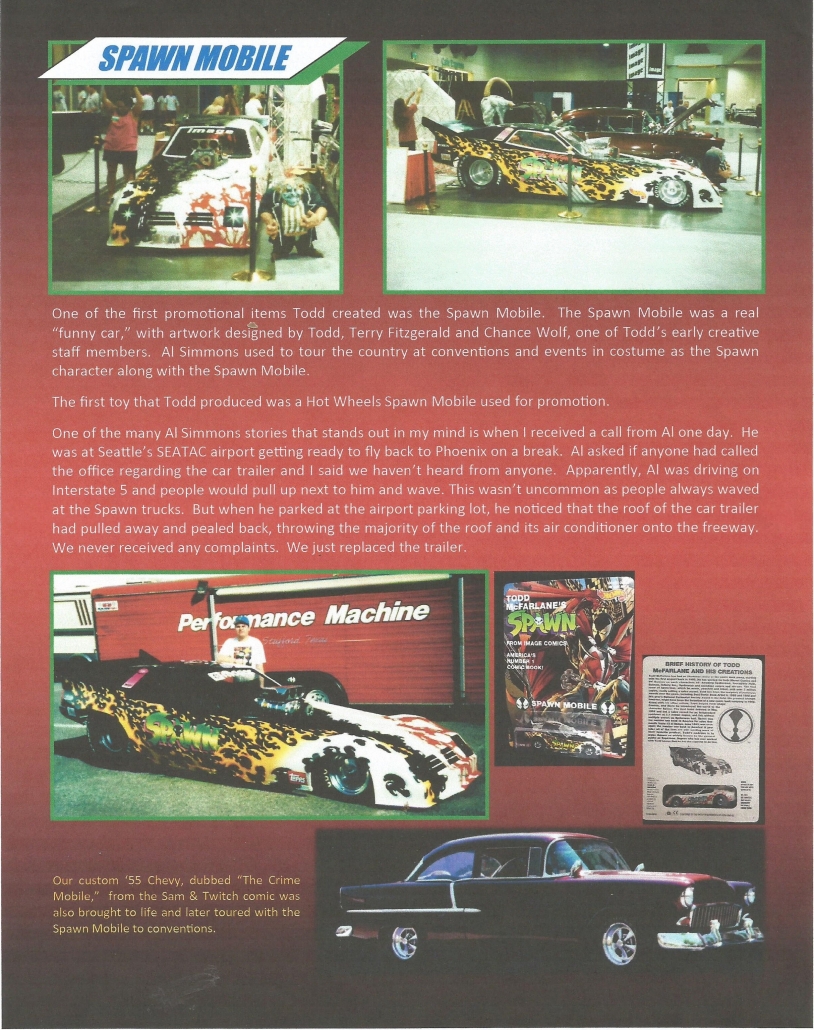 By the end of 2000, McFarlane toys was announcing and producing toys based on baseball players, iconic anime franchises, the denizens of South Park, and even Rob Zombie; and by the end of The Early Days of McFarlane Toys, readers can’t help but feel like they’ve been on a personal journey with larger than life characters and one unstoppable franchise. It’s a book fans will want to thumb through again and again to relive the story of the toy company that defied all of the odds and changed the world of action figures forever.

Asylum Publications is offering Horror News Network readers a 20% discount on The Early Days of McFarlane Toys and any other books on their website. To order at a discount, click this link to head to their website and use the following code at checkout: HORROR20

Collectors better get those wallets ready as Walmart will be releasing a limited amount of Mortal Kombat Spawn action figures hand-signed by the man...
Read more