Writer Mike Carey and artist Peter Gross were happy to answer HNN’s questions about The Dollhouse Family and gave readers a glimpse into the complex world of the new series.

Horror News Network:  Where did the project originate from?

Mike Carey: An awful lot of horror stories include a haunted location as a character, such as The Overlook Hotel in The Shining, Hill House in The Haunting of Hill House, and of course, Keyhouse Manor from Locke and Key and I wanted to write a story focused on a similar location.

Peter Gross: I came into the project later when it looked like it would happen.  I’m not known for horror comics, but once Mike described The Dollhouse Family to me, I realized it was a Mike Carey story, and I could definitely get into that.

HNN: When I spoke to Joe Hill recently, he described The Dollhouse Family as “chilly, Brit horror.”  Do you agree with this assessment of the book?

Carey: I guess I know what he meant, with the story based in history and tradition, although we try not to lean into it.  The backdrop for one of the three story threads is the 1826 land survey of Ireland that essentially attempted to kill off the Gaelic language.  We also get into the Thatcher era of British politics in the central story.

Gross: (laughing) I like how Mike took the whole psychological route with that question, when I think Joe was thinking about it from a different perspective.

HNN: Aside from haunted houses or locations, creepy dolls and doll houses have become a staple of horror fiction as well.

Carey: Dolls are fascinating to me.  They look human or real, but aren’t.  And when you are a child, your toys are alive.  Children give their toys voices and to them they are real.

Gross: Everything that kids are into can be creepy, not just dolls.  They are a replication of life and to kids they are magical.

Carey: I remember that one time my sister had a doll that was nothing more than a head and torso.  You were supposed to style the hair and such, but I couldn’t even look at that damn doll.  It was like a mutilated corpse.

Gross: Ok, since we’re sharing these childhood stories, I have to share one.  When I was 15 or 16, I was at a new friend’s house and I think we had a little to drink and he said “I’ve got to show you something.”  I walked into this dark room and when he flipped on the lights, there were like 2,000 dolls just starring at you, set up so they all appeared to be looking in your direction! 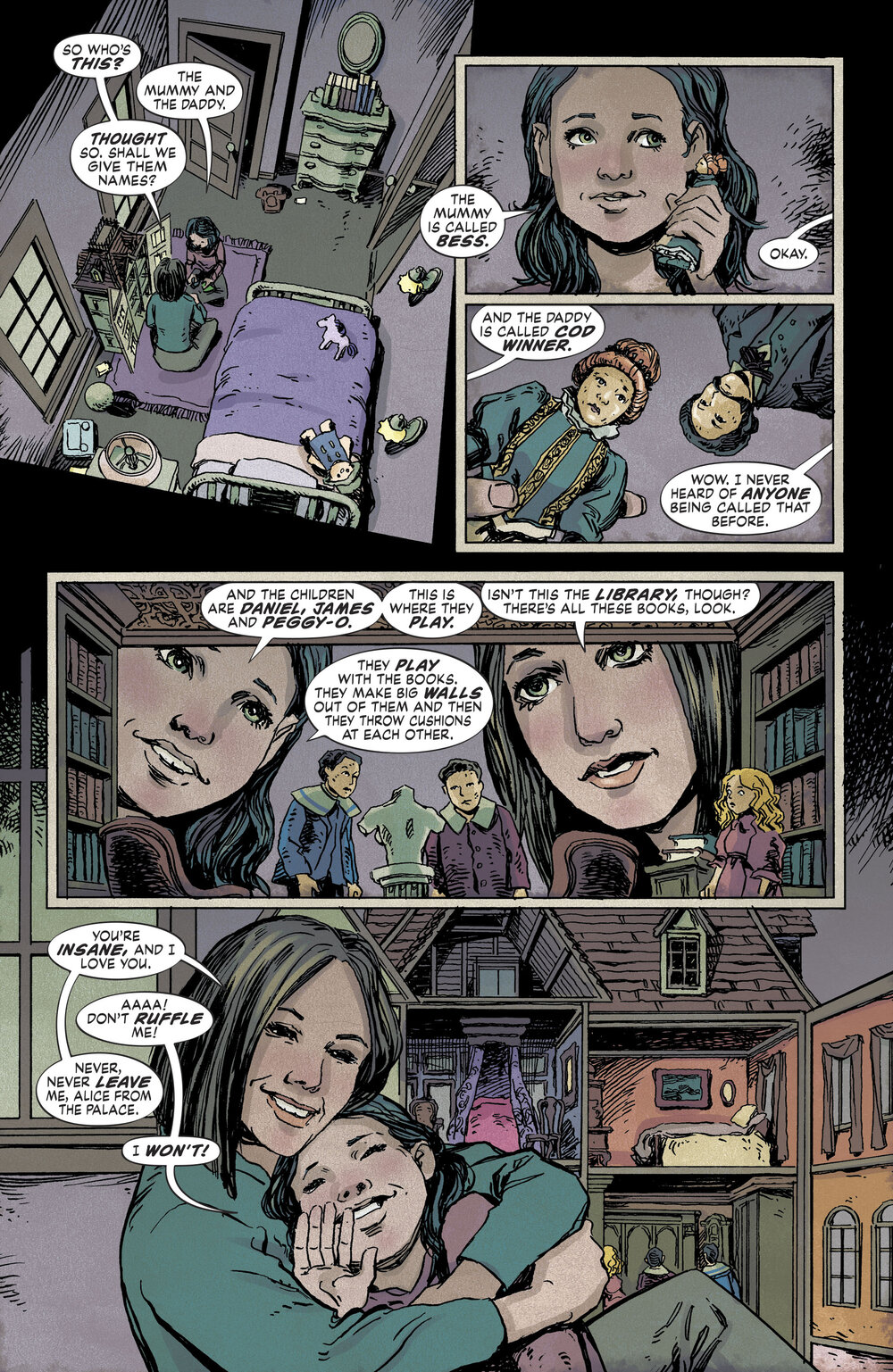 HNN:  The art style varies quite a bit in Dollhouse Family.  Did you approach each scene differently?

Gross: I always approach Mike’s stories from a psychological standpoint.  To add to the horror elements, we have Vince Locke as the finisher.  He adds the EC Comics touches and if I was ever worried about my art not being “horror enough”, he would fix it!

HNN: So far, the connections between the various story threads seem loose, in a good way, which adds to the mysterious feel of the book.

Carey: Loose if a polite word, and we plotted it very deliberately.  The threads are lightly layered, but they converge very quickly and where the house comes from and how it ties everything together and the connections to the distant past will be revealed soon.  The idea was to craft the story the way someone makes baroque music, with a lot of  different musical elements combining to form a whole piece.

Gross: I trust in Mike and the ability to forget what’s happening in the story.  I mean, I read it and I sometimes forget where it is going, so it is kind of fun not to know all the threads, just like the reader doesn’t.

HNN: What has it been like collaborating with Joe Hill?

Carey: It’s been great and he is a wonderful collaborator.  He lets us put our own stamp on the story, but he will sometimes come up with a great idea that we can include through his comments on the script.  Joe suggested we add in a cut-away diagram of the actual doll house in issue two and it is really gorgeous.  The stories in the new Hill House line all have Joe’s DNA woven through them, but they are also each unique presentations.

Gross: Everyone on the book is part of a community thread e-mail and we get to come up with some great ideas.  It’s like a big family.

Carey:  The whole concept of Hill House Comics is a fantastic template; the idea of a curated family of books that are great for readers and tehey have the ability to discuss all of them at once.

HNN: Besides The Dollhouse Family, do you have any other projects that you are working on?

Carey: Right now I am two thirds the way through a new science fiction trilogy that I am writing called The Book of Koli.  It is a series of novels set in the far future and one I describe as a far future Huck Finn.

Gross:  I am currently working on a project with Karen Berger and Josh Dysart, but I can’t say too much about it at the time.  I also would like to go back and work on one of my earliest comics called Empire Lane.

Staff Writer at Horror News Network
Nick joined the website in 2015. His lifelong love of comics and horror began with Universal Monsters and the Incredible Hulk. He has fond memories of going to Waldbaum’s supermarket with his mother and being rewarded with a 3-pack of sealed comics. It’s been all downhill from there… Since those early days, his life has been immersed in four color action and scares on the silver screen.
http://www.horrornewsnetwork.net/wp-content/uploads/2019/11/dollhouse-hero.jpg 680 1200 Nick Banks http://www.horrornewsnetwork.net/wp-content/uploads/2016/05/HNN-logo.jpg Nick Banks2019-11-20 06:47:112019-11-20 06:47:11'The Dollhouse Family's' Mike Carey and Peter Gross: The Horror News Network Interview
0 replies

R.M. Renfield Feature Gets Director at Universal
Scroll to top