You are here: Home / Terminus 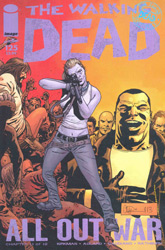 Every 25 issues Robert Kirkman likes to give the TWD fans something “major” to chew on until the next issue is mercifully bestowed upon us.  The latest example was glorious issue #100, where Negan used Lucille to inflict quite the unceremonious going-away party upon Glenn’s head.  So while the “All Out War” storyline isn’t scheduled to end until issue 126, we all had an idea that Kirkman was going to pull something major out of his bag of tricks.  Would it be introduction of new, important characters?  The brutal death of a major player?  We just didn’t know.  What we got, luckily, was an issue so filled with anticipation and the welcome feeling of ominous foreshadowing that I my heart was in the back of my throat all the way up until the last page.  And then that last page……yikes.  Like I said, at the very least we don’t have to wait six months to find out what happens next like the television show is forcing us to do (with the group locked in the train car at Terminus); in Mr. Kirkman’s world, two weeks are enough to discover whether the shocking act committed, seemingly out of nowhere, at the end of #125 was a dream or the beginning of a new reality.  We were warned that All Out War would bring monumental changes to the TWD universe, and by the looks of it that is exactly what we’re getting. read more